150 Years of History, Gone in 10 Hours: The Day Garrettsville Went Up in Flames

The gray-haired barber had just clipped, snipped and buzzed his way through another typical Saturday-morning rush of regulars in his one-man barbershop in the small town of Garrettsville. Jim Reppy had chatted with customers about the Browns and Buckeyes and the Tribe with the same second-nature dexterity with which he delivered their 12-buck haircuts — inevitably the same cuts to the same guys every few weeks for years, to sons and fathers who'd been coming the Barber of G'Ville since his father-in-law moved the shop onto Main Street back in 1959.

It was around 1 p.m. on March 22, 2014, by the time the rush slowed down and the barber leaned on a big barber's chair and gazed out the window. There was a girl on the street, college age, looking alternately at the barber through the window and up toward the roof of the building next door. She approached the door.

"I don't know if you know this or not," the young women said, "but I think that building's on fire."

Reppy walked out into the street and looked up. Black smoke was already billowing from a few doors down. He walked back into his shop and quickly grabbed some cash, financial records, anything he could carry. By the time he was back on the street and ready to drive to the police station, crowds had gathered to watch the fire which by now had spread, sending even larger plumes of black smoke rising into the sky.

He took another look at his barbershop. It'd be the last time he'd see it standing.

Twelve other businesses would burn that day. Thirty-five fire departments would work to put out the flames. One hundred and fifty years of history would be turned into ashes despite their efforts. And small-town Garrettsville wondered whether it would ever be the same.

Slideshow The Day Garrettsville Went Up in Flames 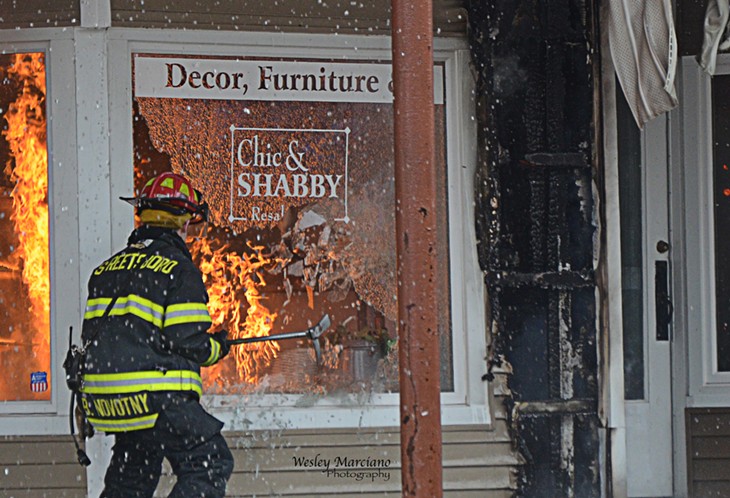 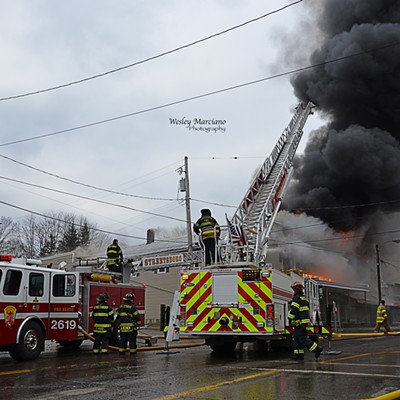 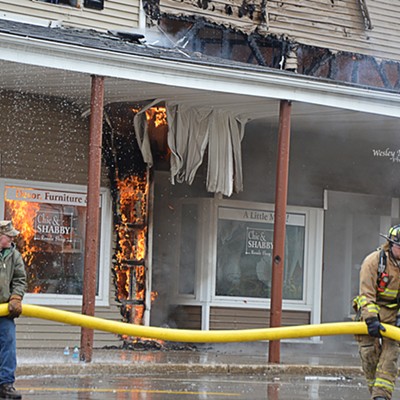 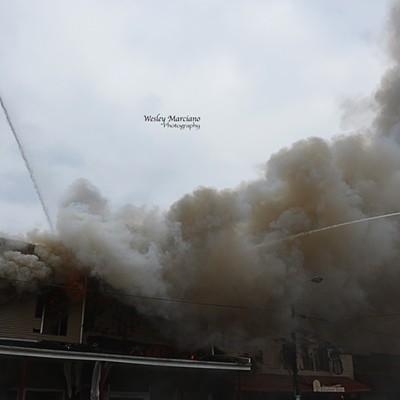 Garrettsville is a tight-knit, blue-collar town just 45 minutes from Cleveland, and three miles, navigated through hills and gorgeous farmland, from Hiram College. A couple thousand folks live in just a few square miles tucked away in Portage County. The town's kids attend schools each named after former president and area resident James A. Garfield.

With a McDonald's, a Dairy Queen, a Domino's, a car dealership, a liquor store and a gas station, much of downtown Garrettsville could as well be any other downtown, duplicated across the state by way of repeated dollops of recognizable brand names.

But further down Main Street is a block steeped in history, one protected and revitalized with varying degrees of success over the years, full of small, independent family businesses operating out of the first floors of a cluster of Civil War-era buildings.

At the center of that 150-year history was a large, three-story, 30,000-square-foot structure known as the Buckeye Building that took up nearly half the block. Renovations had come and gone over the years, but the layout remained mostly the same as always: storefronts on the first floor, a stage and meeting room on the second, and storage on the third.

Local developer Mike Maschek bought the building in 2012 for a bunch of reasons, but the history certainly didn't hurt.

"The second floor housed what was called the Buckeye Block Theater," says Maschek. "That's where James Garfield spoke; William McKinley too. It was still the way it looked back in the mid-1800s."

It had less honorable historical significance too, especially for a rural Ohio town in the post-Civil War era.

"The ladies' Ku Klux Klan used to meet there. The men would meet over there, the women would meet over here, and up there they'd have minstrels, those musical things," says Maschek. "They had little plays and sing-alongs and would cram 300 to 350 people up there."

Resident Estelle R. Brown wrote about the building's history in a November 2013 story for the Villager, the town's free weekly paper.

Garrettsville officially became a village in 1864, and the Buckeye Block was the first large building to be constructed in the municipality. Built by Asa Nelson and Eugene Francis Case, it housed a hardware business operated by A.A. Barber and Enos Smith. Additional stores opened up on the main floor, and Buckeye Hall, a 400-seat auditorium, was unveiled on the second floor in the fall of 1868. Dances and live musical and theatrical performances were held there as late as 1925, with Layer's Grocery operating beneath it for many years thereafter.

For decades after, it fell into disrepair, lacking modern updates or restorations. Awnings over the first floor businesses were old and dirty. Siding on the upper floors had been left to wither away. But two years ago, things changed. The Villager continues:

A little before-and-after reminder is in order, now that the buildings are beautiful, lights are twinkling, and businesses are bustling.

Just three short years ago, Main Street was in shambles. The sagging Buckeye Block Building was so dilapidated, it was a public hazard and about to be demolished. Its shabby appearance did not help neighboring establishments in their efforts to attract customers, and businesses housed in the buildings were barely hanging on. Serious decline began when the building's largest occupant, Irwin Hardware, sold out in 2002. The new buyer sat on the property, leaving it vacant and subject to deterioration for a decade.