40 Love: Bonds of Friendship Have Kept Air Supply Together for Four Decades 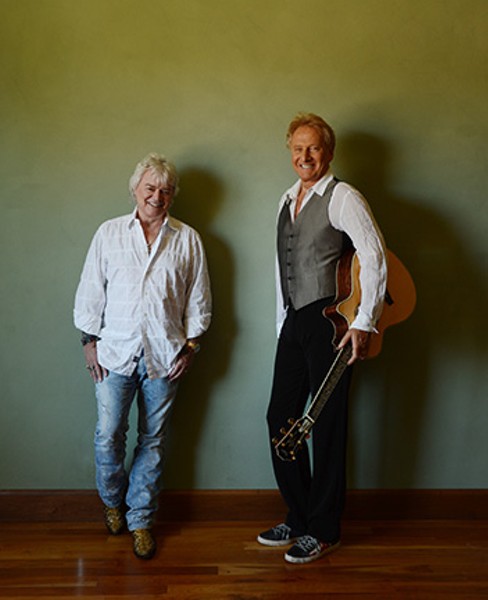 Soft rock balladeers Air Supply celebrate their 40th anniversary as a performing unit this year. Although you might think they would have had a few disagreements along the way, they say it's actually been smooth sailing. The pair describe themselves as "best friends," which is probably a good thing, since they still perform between 150 and 200 shows together each year, including a show this week at the Akron Civic Theatre.

But as singer-songwriter and guitarist Graham Russell relates, there was at least one humorous misunderstanding between the two when he suggested to singer Russell Hitchcock that they should record their own version of the Harry Nilsson staple "Without You" (which was originally recorded by Badfinger).

"We were in Mexico in '89, driving between shows, and talking about the next album. Out of the blue, I said to Russell, 'I'd love to record "Without You." He misunderstood — he thought I meant without him. He turned to me and he said, 'Really? What do you mean? What have I done?' I said 'No, the song — I want you to sing "Without You" and he said, 'Oh!' So we went in and did it!"

The group also began in an unusual fashion with Hitchcock and Russell hanging out as apostles — they were both in the chorus for a production of Jesus Christ Superstar in Australia. Russell can still remember that when he first heard the whole cast sing, it was the voice of Hitchcock which really stood out. "As soon as I heard it, I thought 'Wow, what a great voice!'" he recalls.

The life of an apostle left the two with a lot of free time backstage and since they didn't know anybody, they quickly became friends.

"We started to sing my songs, I think on the second or third day of rehearsal. So from the very first, he was singing with me and we were singing together, singing original songs and that's how it all began. It's weird, we never really spoke about it and we never said 'Oh, let's sing together for a couple of years.' We never said that — it just happened. When we started to sing the songs, we have never picked out the harmonies to sing — one of us will start singing and the other one will find the harmony straight away. It always sounded really good."

The members of the future Air Supply were quite green, but their lack of experience would really help out in the long run.

"One of Russell's greatest quotes [is when] he said, 'We never made any mistakes because we didn't know what we were doing,' and we really didn't. We just wanted to sing together. Then we made a record and we had a big hit. Then we made an album that was a hit and then we were off."

But about that big hit: Imagine if you found out that you were about to have a hit record — and you didn't even know it had been released! That's exactly what happened to Russell when the pop ballad "Lost in Love" — which had been a hit in Australia in 1978 — began to break in America in 1980. Legendary record maestro Clive Davis had heard the Australian version and got in touch with the band's record company without Hitchcock or Russell being aware of it to license the track for other markets. Davis made a few slight modifications, adding additional female background vocals, but the resulting hit was very close to the original version. The success couldn't have come at a better time for Russell, who found out about it when he picked up a copy of Billboard magazine.

"I was broke and destitute and had food poisoning," he says. "I picked Billboard up at a publishers convention in Cannes and we were on the front cover and I had no idea. I had no idea it had even been released. So that's how it began. I called Clive up and I didn't even know him. I told him who I was and he said 'You've got to go and make the album, because "Lost in Love" is going to No. 1' and I said 'Really?' I flew straight back to Sydney and we made the first album which was the first Air Supply album for America."

Russell says that luckily they had some songs ready to go, including another future hit, "All Out Of Love." Three weeks later, the album was done and the Air Supply story really kicked into high gear.

Forty years later, things remain strong collaboratively between Russell and Hitchcock. They've continued to record and release new music on a regular basis and will release a new album this year to celebrate their anniversary, one which will contain at least a couple of dance-oriented tracks, something which is a new direction of sorts for the group. They've been previewing one of the tracks, "Desert Sea Sky," in their current show. As a songwriter, Russell continues to push the boundaries, even when it feels risky and outside of their normal process.

"I've been into dance music for years and I really thought it would be a bit strange if we did it. But I think now I came to the realization and said 'Well, why not? If it's a great song, let's make a dance mix of it.' So we did and it sounds really cool and it's getting a great reaction live."

As he speaks about the new material, Russell sounds excited. At the same time, he seems to have a firm grasp on the appropriate songwriting focus that makes sense for Air Supply at this point.

"These songs in particular, I came to the realization that we really don't need to try to do anything that's not within our bounds," he says. "I thought that instead of having any pressure to write this kind of song or that kind of song, I'm just going to see what comes up, bearing in mind that we're going to make a whole album. So the songs started to come and they're all fitting together so beautifully. They're real traditional Air Supply songs [and] it's all the songs that we really like at the moment. So there's no pressure to have something on the radio or have to have a hit song; it's just Air Supply at its finest and at its most pure."

As they mark a huge milestone anniversary in 2014, you won't find them resting or taking a break. Russell and Hitchcock are juggling not only the new album, but also several musicals that are in the works, inspired by their catalog of songs.

"All Out Of Love is a musical that's going to open in Australia. There is also another one called Lost in Love, which is totally different, which is not in the rehearsal stage yet," he says. "Then there's a third musical that opened in November at Michigan State University, which is all dance. So there's so much going on that it's kind of hard to keep up with it. As a matter of fact, we just had the request yesterday for yet another musical for Korea. They want to license all of the songs for the Lost in Love musical in Korea. It's a great thing for us, and I think it's coming at a great time where we're standing back and saying, 'Oh great, all of these songs are going to continue for quite a time yet.'"