Get Rich or Die Tryin' (Shady/Aftermath/Interscope) 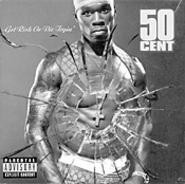 Get Rich or Die Tryin', the first official full-length from rapper 50 Cent, is a debut that burns like an entry wound -- which is no surprise, coming from a man who claims to have been shot nine times. But for all the spent rounds, death, and suffering (and Get Rich has plenty), the album isn't as fatalistic as the body count suggests. "Summer days wouldn't be special if it wasn't for rain/Joy wouldn't feel so good if it wasn't for pain," 50 rhymes on "Many Men (Wish Death)," on which he delivers the disc's submerged thesis: If it weren't for pain, we wouldn't know happiness.

And so 50 brings the agony with aplomb: "I don't smile a lot/'Cause ain't nothin' pretty/Got a Purple Heart for war/And I ain't never left the city," he spits on "If I Can't," a cocky cut that mates 50's deep, cottonmouth delivery with a bare-knuckle beat. Elsewhere, there are plenty more reasons why this disc smashed Snoop Dogg's record for first-week sales by a rap debut: Dr. Dre's spectral keys turn the Ja Rule-bashing "Back Down" into a hot-headed highlight; "Like My Style" is a combustible blend of gin and gunpowder; album-closer "Gotta Make It to Heaven" is Mean Streets set to wax, making it a fittingly violent climax to a disc as indelible as scar tissue.