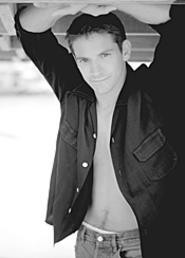 It's taken two years for Jeff Timmons's ears to stop ringing. As a member of platinum popsters 98 Degrees, the Massillon native spent most of his 20s in arenas full of panting teens, deafened by more screams than you'd hear in a thousand slasher flicks.

"It was so loud and so overbearing that you couldn't really hear what you were doing," Timmons sighs from the lobby of the downtown Marriott on a recent Monday afternoon. "Nobody knew how we sang, because we couldn't hear it. Our sound guy would tape the show, and I'd be like 'Wow, I really can't sing. I'm really sounding terrible,'" he winces, before brightening. "I can hear it now."

And we can hear him too, for a change. Since most boy bands have the life-span of a sea monkey, Timmons has embarked on a solo career devoid of plastic, pop production values, stiff stage moves, and dubious facial hair. He's about to hit the road with adult contemporary star Jim Brickman on his Christmas tour; they're in town, rehearsing, after playing a packed show at Akron's E.J. Thomas Hall over the weekend.

At the plush auditorium, it was evident how much Timmons's audience has changed. His crowd had gone from girls to grandmas, some of whom actually plugged their ears when electric violinist Tracy Silverman brought the show above a sensual whisper. Backed only by Brickman, Timmons took center stage for a take on the pianist's "Love of My Life." Bathed in white light, he punched the air softly as he performed, his voice both silken and sonorous.

It was a long way from the breathy bump and grind of latter-day 98 Degrees. By the time that band had run its course in 2001 and gone on an extended hiatus, Timmons was reduced to a pop automaton.

"When I started the group with the guys, we modeled ourselves after Boys II Men, Take 6, doo-wop groups," Timmons says. "As we progressed and got put into the boy-band category, so the animal became. We started to follow into that: You gotta dance onstage, you gotta have explosions, pyro, all this hype. The shows weren't even satisfying for me, and it really did become about us being 98 Degrees and how we looked. It wasn't fulfilling."

So Timmons struck out on his own, writing, producing, and arranging his forthcoming solo debut, Whisper That Way. It's a risky proposition: With the exception of Justin Timberlake, few former Tiger Beat pinups have made it back atop the charts.

But Timmons is taking a novel approach for a former pop icon. Though he's been courted by several majors, he decided to release his album himself, selling it first through his website (www.jefftimmons.com) before making it available in stores early next year. Part of the reason is economic: Timmons knows he can make more, selling 100,000 copies of his album on his own, than he can by going triple platinum on a major.

But the main reason had to do with control over the direction of his own music, something he never had in 98 Degrees. Timmons revels in his freedom on Whisper, balancing expected funk-lite workouts with more sobering songs about fatherhood and failed relationships. There's the breakup ballad "Better Days," as well as "Baby J," a tender ode to his two-year-old son, Jeffrey Jr. -- neither of which would have gotten the green light from a label looking to further mine Timmons' teen-pop cache.

"I just talked to some people from Dreamworks, and they were like there's too much of a story here, your emotions are on your sleeve on this album," Timmons says. "I'm like since when is that bad? Instead of making a story up, why don't you just tell the real story? Why don't you just put it out like that?"

And so Timmons has, finding an audience among adult contemporary fans, who have begun to embrace the 30-year-old's combination of nimble pop sounds and more adult subject matter. The Brickman crowd cheered loudly for Timmons, and he's starting to get spins on AC stations.

"This is my chance to do my own music. If I only hear it once on the radio it'll be worthwhile -- and I've heard it, so I'm good," chuckles Timmons. "Now I want to keep going. All the goals are coming true, just like they did with 98 Degrees." With one difference: "This time, I'm in control."