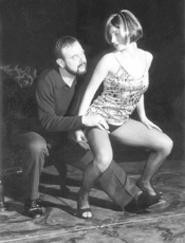 Anyone who has progressed beyond adolescent comic-book fantasies couldn't help being engrossed by Dobama's production of Closer. Patrick Marber's 1997 gilt-edged comedy/drama is the fiercest illumination of human foibles since Edward Albee's Three Tall Women.

Audience members at Dobama's opening night were spotted hyperventilating, fanning themselves in an appreciative frenzy with their programs. They even went so far as to stop unwrapping their hard candies in order to catch every witticism of this lacerating update of Noël Coward's Private Lives. Taking Coward's insouciant spouse-swappers into the age of cybersex, this play holds an elucidating black-edged mirror to the debilitating effects of sexual vanity and ego in the age of the Internet.

It follows four soldiers of fortune into the battlefields of singles London through four years of betrayal, role-playing, and unsavory intrigues. The battle of the sexes is rendered with the ferocity of the siege of Leningrad. In scenes that imprint themselves on the viewer's brain like a psychological tattoo, the evening's love-scarred masochists torture their lovers for carnal secrets.

Dan (Sean Sullivan), a writer of obituaries (powerful symbolism: He can only understand dead people), and Alice (Jodi Dominick), a Sally Bowles-like waif whom he has just encountered injured on the road, banter in a hospital waiting room. She becomes enamored because he cuts the crusts off his sandwiches. It is these little eccentricities that give Marber's writing its own brand of luminous verisimilitude.

At the same time, Anna (Laura Perrotta), a swank photographer (more symbolism: a woman who only comprehends surfaces), and Larry (Terry Burgler), a dermatologist (he's the only character who sees beneath the skin), meet in the park by happenstance. Before the exhilarating evening draws to a close, this foursome will switch allegiances more often than Liz Taylor.

In a play that covers every kind of deception, one of the most intriguing is projected on a big screen, where we see Dan pretending to be a woman, luring Larry on in a sexual tease on the Internet.

Interestingly enough for a male playwright, Marber is far more sympathetic and trenchant in his portrayal of women. In dialogue worthy of Oscar Wilde, he illustrates the nuances of male vs. female psychology. As Anna confides to Alice: "We arrive with our baggage, and for a while they're brilliant, they're Baggage Handlers. We say, 'Where's your baggage?' They deny all knowledge of it. They're in love . . . they have none. Then just as you're relaxing, a Great Big Juggernaut arrives with their baggage. It Got Held Up. One of the greatest myths men have about women is that we overpack."

The script is elegantly fashioned: Each scene builds to rejection or revelation -- a spurned husband getting his revenge with sexual blackmail; a vulnerable young woman tossed out by her boyfriend. As in one of Graham Greene's intrigues, no one is what he seems to be.

Few works so wisely chart the perilous course of passion: how a bit of stale jealousy erupting ("If you fucked him, you fucked him: I just want to know") can be the final push on a plunger to blow love into oblivion.

As actor or director, Scott Plate is a golden boy of the theater. Here, functioning as the latter, he applies his deft touch to help his players flourish. A major accomplishment is making an American cast sound authentically British. This interpretation, though lacking the posh production values that gave it a cinematic quality on Broadway, still shines in the telling psychological details.

Perrotta, like a delicate tea rose, is fragile but complicated. She exudes a mix of sensuality and ladylike grace. Praising this much-lauded actress is like complimenting Niagara Falls for its rainbow. Both represent the unstoppable benignity of nature.

Newcomer Dominick springs out like a sunflower -- vivid, bright, wild, and untamed. Burgler, the play's heart, is the evening's most self-aware figure. His performance, both tender and arrogant, makes for an intriguing paradox. Sullivan is hampered by his youth -- he's at least 10 years too young for the role. He doesn't have the experience to muster the necessary charm to make his character irresistible.

Along with Lolita, American Beauty, and The Graduate, here is a time capsule that could be labeled "Sexual Mores of the Last Half of the 20th Century." With a cool, biting intelligence that brings to mind a less elusive Pinter, it is too insightful for empty cynicism and so full of truth and wit that it never hurts when its dagger penetrates.