A Couple of Wise Guys

Good things are cooking in Tremont, where a pair of chefs are playing with their food. 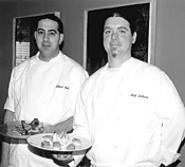 Judging by the uniformity of local menus, a gourmet might well conclude that Cleveland's better kitchens have run out of ideas. Is there anyplace that isn't serving calamari these days? Is there no escaping mushroom strudel? Will we ever move beyond duck confit? Not that there's anything wrong with any of these dishes. In fact, most of them are divine. It's just that -- along with long-bone veal chops, pumpkin gnocchi, and dolled-up mac 'n' cheese -- they've become practically ubiquitous. This is too bad, both for diners and for ambitious chefs. After all, there's an entire realm of pleasing and less common ingredients and flavors out there, and we seldom get to try them.

So let's raise a toast to Sage Bistro, a dim, friendly bar and dining room in Tremont where the chefs are reworking old standards, pursuing new pairings, and generally playing with their food. Here, the confit is quail, the pork chops are shrimp-stuffed, and the ever-popular free-range chicken gets a light polish of raspberry and cinnamon glaze. No, not everything is perfect: Some of the dishes we sampled had minor missteps in concept or execution. And with prices on the majority of entrées pegged at $25 and up, diners are paying a substantial subsidy for the staff's daring. But it's great to see some artistry going on in the kitchen.

The toques behind the twists belong to partners Michael Fadel and Nick DeCocco, culinary professionals who most recently ran the kitchen at downtown's former Ciao! Late last year, the pair took over the already evocative space that had once been OZ bar and bistro, installed hardwood flooring, replaced chairs and barstools, and slapped some new colors on the walls (sage green, lavender, and coppery orange) before reopening right before the holidays. What has resulted from their efforts is a warm and intimate space filled with candles, heavy white linens, and low lighting that makes everyone look a trifle mysterious.

Against this urbane backdrop, the staff's eagerness to please is downright refreshing. Marissa DeCocco runs the front of the house as though she were throwing a soirée for her closest friends, and her concern for diner satisfaction is apparently contagious. A Thursday-night waiter stunned us by fetching wine samples from the bar when he noticed we were having trouble deciding what to drink, and a Saturday-night server was honestly worried when she overheard us utter the word "fibrous," relaxing only after we assured her -- twice -- that we were not discussing our lamb chops.

The hospitable vibrations extend to the surprise appearance of amuse-bouches, pampering tidbits that start every meal at Sage, compliments of the chefs. One night, it was an espresso cup filled with gingery lemongrass-carrot soup; another night, it was a soupçon of champagne-poached salmon in chilled strawberry purée. The bistro's breadbasket is also one of the more inviting ones around, crammed with slices of rustic multigrain, whole wheat, and focaccia from nearby Seballos' Pastries, and served with dainty florets of sweet butter.

Fadel and DeCocco's handsome menu, presented inside heavy, important-looking bindings, changes every five to six weeks, but typically includes a soup, several salads, a handful of appetizers, and nearly a dozen entrées. While the basic ingredients aren't extraordinary -- oysters or tuna, lamb or beef -- it's the accompaniments and muscular flavor pairings that make many of the dishes sing. Seared sea scallops swim in a sauce of Pernod and crystallized ginger; quail confit is glazed with honey and served with mascarpone polenta and blackberry tapenade. And consider an appetizer of crab cakes: two silver-dollar-sized nuggets paired with crisp, zesty daikon radish slaw. Nice, but hardly unique, you say? Ah, but add thick swirls of scallion and basil-infused aioli -- so aromatic, it makes you gasp -- and suddenly the dish becomes unforgettable. Similarly, there's the warm duck salad, a good idea that lately has been done to death in local restaurants. But here, the clever chefs have tweaked the standard by replacing the usual shredded duck with rich, rosy breast meat and pairing it with wilted mesclun, instead of the usual crisp greens; then they round it all out with a touch of smoked-bacon vinaigrette and spoonfuls of juicy pear compote.

While the kitchen's creations sometimes border on busy, the chefs know when to practice restraint, and rarely do they push diners across the line into sensory overload. In fact, the less stirring dishes generally suffered from too little oomph, rather than too much. For instance, while the notion of stuffing a double-boned pork chop with shrimp and panko seems meritorious, the filling proved to be fairly bland and added nothing to the already flavorful chops. (Interestingly, an acquaintance who tried the dish on a separate visit complained the filling was too spicy . . . It either goes to show you can't please everyone or points to consistency problems in the kitchen.) Compounding the tedium, at least on this occasion, an accompaniment of maple-tweaked baked beans, served on a thin slice of cornbread, was flavorful but undercooked. Only a side portion of succulent peach chutney possessed real pizzazz, piquing the other ingredients with its own sweet juices.

Rack of lamb, with a mushy "crust" of roasted, mashed bananas, was another so-so construction: The fruitiness was fine, but the introduction of some crispness would have made the crust more interesting. On the side, a generous mound of creamy Gruyère-infused risotto packed a flavor punch, but slender baby carrots, with a fine, minty aroma, were strangely tough and stringy.

Happily, two other entrées were entirely smashing, with nearly every component a star. Twin grilled beef tenderloins, stroked with a deep, dark fig demi-glace and sided by buttery, scallion-flecked mashed potatoes, were astonishingly flavorful; and although it gained little from its scant garnish of foie gras, an accompanying Anaheim pepper "relleno," unbreaded but overflowing with melted buffalo mozzarella, was luscious. The other knockout was a main course of barely seared sushi-grade tuna, served on a pad of slightly peppery, vaguely tart somen noodles and surrounded by grilled oyster mushrooms: an interplay of sensations -- lush versus crunch, heat versus sweet -- that set off gustatory fireworks.

Sage has a tasty little list of specialty martinis and a well-chosen international wine list, with plenty of good bottles in the $20 to $40 range (as well as some that go considerably higher). However, only five whites and six reds are available by the glass, and while we enjoyed one night's Zin and another night's Pinot Grigio, we wished there had been more "by the pour" options to choose from, especially in light of the menu's main-course diversity.

Desserts are the domain of sous chef Jason Vincent. He rotates his repertoire regularly, but during our visits, the sweet stuff included a hot apple cobbler, with tender apple slices bubbling beneath a jazzy, Stilton-spiked topping, and a fine chocolate-pistachio tart, with oodles of crisped nuts bound together by smooth Ghirardelli semisweet chocolate, in a delicate shortbread-like crust. But his signature dessert -- Crêpe Delicado -- was a veritable party on a plate, with a delicate, pudding-filled crêpe sided by fresh raspberries and sliced strawberries, and presented with an enormous walnut tuille, loaded with tongue-tingling sarsaparilla ice cream.

A smart composition, that. No wonder they call this place Sage.