by Cris Glaser and Diane Sofranec 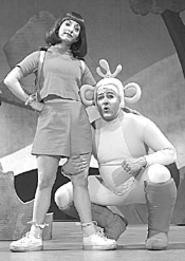 In her New York apartment a couple of years ago, Christina Bianco babysat two toddlers who spazzed out whenever Dora the Explorer came on the tube. So she was well aware of the hit Nick Jr. 'toon when she landed the lead role in the live stage version of Dora the Explorer Live!: The Search for the City of Lost Toys. "I already knew what kind of a phenomenon it was and how much it meant to these kids," says the 22-year-old. "But I never thought my first job out of school would be playing a seven-year-old, let alone a famous one."

Bianco's become a sort of celebrity among preschoolers. As Dora, she and her bilingual buddies take the audience into the jungle to find a lost teddy bear. Dora throws out clues in Spanish, and the audience helps solve the caper. "Dora asks the kids a question, we'll pause for a minute, and the kids respond," Bianco says. "They love that."

Celebrate leap year Sunday with some dedicated jumpers at the zoo's Leap Frog Day. In addition to amphibian-themed arts and crafts, and heated games of leapfrog, there'll be tons of useful insight shared (learn how to identify different species by the sounds they make!). An expert will discuss frog conservation and the secrets of poison-dart frogs -- with living, breathing examples. But "We don't really want to encourage the whole petting thing," says spokesperson Esther Newman. The action happens from 10:30 a.m. to 4 p.m. at the Cleveland Metroparks Zoo's RainForest, 3900 Wildlife Way. Kids get in free; adults pay $6. Call 216-661-6500 for more information. -- Diane Sofranec