A Finger on History 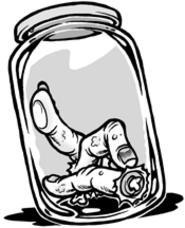 The only thing more grisly than a man murdering his wife by hacking her to bits is that the victim's fingers were placed in a jar and have been on public display since the crime was committed in 1883. They currently reside at the Wood County Historical Center on the outskirts of Bowling Green.

"We get a lot of people in because of the fingers," museum assistant Stacey Hann-Ruff admits. "We get little kids through here all the time, and there's no way to make it a nice story."

The disembodied digits, once attached to Mary Bach, were separated from her -- along with her other appendages -- by her husband, Carl, the last man hanged in Wood County. In an attempt to display to the jury just how brutal a man Carl was, the police scooped up the fingers and presented them as evidence.

"I always feel bad telling the kids the story," Hann-Ruff laments, though it does give her a chance to set the record straight. "There are lots of strange stories the kids all know. They think we have a whole arm here." Indeed, the reputation of the fingers -- nestled in a display case with other items taken from the courthouse -- has spread so wide that it has been cited in both AAA tourist books and the Roadside America series.

"If it gets them through the door, I don't care if the fingers brought them here or they heard about one of the quilts," says Hann-Ruff. "Once they're inside, they do look at more than the fingers."

And there is certainly more to catch the eye than three shriveled digits in a jar. The center occupies the old Wood County Home that operated at the site from 1868 to the early 1970s. After a brief tryst with vandals and kids hanging out in the attic, the former home for those too poor or ill to care for themselves was turned over to the Wood County Historical Society. The quick transition meant that the main structure and various outbuildings -- including a working 19th-century oil drill -- are still intact. The few artifacts that were left from the county home were quickly supplemented with donations.

"A lot of the artifacts we get when people move into nursing homes," Hann-Ruff says. "They feel good knowing that it's coming to the historical society." Which means that, while the center has the usual assortment of antique furniture, it has also amassed an impressive collection of old high school class photos and yearbooks, quilts, "the biggest collection of antique wheelchairs and bedpans in Northeast Ohio," and a stuffed pheasant shot by Clark Gable.

"It was given to us by the Wood County Pheasants Forever," Hann-Ruff explains. "I don't know how they got it."

At least they didn't stick it in a jar.