A Gay in a Manger

Jesus digs show tunes in U of A's Corpus Christi. 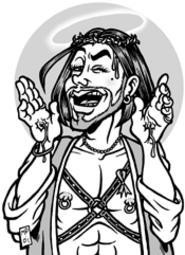 Terrence McNally's Corpus Christi almost didn't open in New York City in 1998. After reading reports that the play depicted Jesus sodomizing the Apostles, protesters threatened violence, and the production was temporarily canceled. So it's no surprise that the same play almost didn't run in Ohio. Slotted to open this Saturday at Theatre 8:15 in pastoral Green, Corpus Christi was described by director J.T. Buck as "the right play at the right time at the right place" -- until the plug was pulled last Friday by the theater's producer.

"I have no idea how it could be offensive," claims Buck, who has been rescued by the Theatre Guild, a student organization at the University of Akron. "I think it's kind of like what happened with The Last Temptation of Christ: Anybody who's going to find this play offensive is going to find it so without having seen it."

Aware that the conservative assumption that "gay" is synonymous with "rampant sex" could spark protest, Buck took the initiative to educate the public, especially since none of the reported coital frolicking attached to Corpus Christi actually takes place. "I even showed it to a very fundamentalist, conservative minister," Buck says. "And he said, 'Well, I still don't agree with you, but it's nowhere near as evil as we thought it was.'"

Still, the story of Joshua, a Christ-like homosexual growing up in 20th-century Corpus Christi, Texas, proved "too much for the theater to handle," though apart from an opening baptism sequence and Joshua's betrayal by a man named Judas, the plot has little do with the Gospels. Buck has even toned down the camp humor and overdone homosexuality of previous productions, casting both men and women, straights and gays, and a variety of ages and body types.

"McNally wanted to write a play about a Christ figure who was inclusive of everybody," Buck explains. "The play is about compassion. It's about showing that compassion can be had from religious institutions as well as the regular gay rights organizations."

Seeing Corpus Christi produced is not just a matter of principle for Buck: Proceeds from the play are earmarked for AIDS Holistic Services of Akron, which stood to lose much from the cancellation, but now stands to gain more, thanks to the larger venue and increased backing.

"It's been a very stressful week for those involved in the show," Buck admits. "One day we're gone, the next day we've risen again, so to speak."

Theatre 8:15 -- known for its family-oriented musicals -- could not be reached for comment, but according to Buck, the play had been anything but stressful for the producer. "He's received no threats, no phone calls, no nothing," he says. "It's just the fear that that might happen that motivated it."

After all, New York City is one thing, but Norman Rockwell never depicted a gay messiah perched on a stool in a soda shop.