A God Among Men 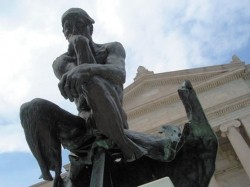 “The Thinker,” which is displayed in front of the south entrance of the Cleveland Museum of Art, is one of a handful of monumental castings of the famous work that was produced under Rodin’s supervision. It bears an identifying plaque that includes the phrase “Tragically damaged through vandalism March 24, 1970.”

Let me climb upon you. Let me embrace you. Let me whisper in your ear. You came to sit nude among us.

Men with fragile pale flesh clucked their tongues and raised their eyebrows when you took your rightful place before the city’s most glorious portal. They’d argued to have you safely enclosed behind stone and glass. And they were right. The Cleveland air, made acrid and thick by smokestacks and droning factories, attacked you immediately. It corroded you and altered your color, but you stood your ground nonetheless, a man of the people. My people.
Your protectors squinted at the relentless sun that both illuminated and broiled your bronze skin. They stood inside the gracious rotunda you once called home and peered out at you, wringing their hands as you bore the gales and ice of winter. You were stoic and unafraid in endless contemplation before their worried eyes.

“There is nothing on Earth so good for any bronze as the human hand,” said one, to which the rest agreed. They commenced waxing and caressing you, satisfied that this was your proper care. And thusly you remained for more than a half century.

Then beneath the cloak of a fair spring night came other men who embodied the fears of your doting protectors. You beheld them with your pensive gaze. After all, these were your people as well. But anger and danger and heat coursed through their veins, and they’d come to slay you in defiance of privilege and war, of inequity and power. With hands as human as those that lovingly massaged you with wax, they laid a fierce weapon between your muscled thighs, where all men are vulnerable, even those fashioned from thick metal.

In the dank, deep darkness, the terrible explosion rang.

You spent the next hours so very alone, facedown between a gentle reflecting pool and four towering Ionic columns, waiting for dawn. Your sinewy calves were torn apart, your clenched feet annihilated. Your torso was twisted and contorted. Your fine shoulders were scraped and gouged. You were cracked and dented, the secrets of your insides and your maker’s technique torn open for all to see.

When your keepers discovered you, the gasps and outrage ensued. When the constabularies cleared the scene, the scholars convened and studied your ravaged body. The impossible jagged tongues of metal that were once your limbs were frozen mid-scream. A grotesque fold of bronze was all that was left of a seat that was meant to support you forever.

They stroked their chins, argued and discussed. They considered and disagreed, and, above all, they mourned. But their last word put you back before the city without repair or alteration.
If you once sat nude before us, now you were naked.

Through the years, pity and apologies fluttered around you, but they only served to comfort your admirers. You absorbed none of their sympathy. Because, instead of mocking you, your wounds and amputations emblazoned you with the human condition and amplified your profound statement. Toppled by wrath, resurrected by faith, galvanized by time, you were never more alive or triumphant than you are right at this moment. A giant before an army of Pygmalions.

Your attackers disappeared into that long-ago night –- anonymous and small, never facing retribution. They are alive, dead, aged. They are mothers, fathers, politicos, artists and thieves: molecules in the sea of humanity. Therein, waves billow with destruction, passion, love, indifference…too many to list, but each as weighted as the next. It matters not; you know them all. Let them swirl all around you as you remain unfazed at your post.

The others that bear your name and original form may still have their metal feet and an unblemished patina, but only you endure each day with a wound worthy of Prometheus. Your creator watches on in complete understanding of your tragic and triumphant complexity. He sees the beauty in your disfiguration and the dignity in your pain. You belong to him. You belong to the Gods and the Earth. You belong to me.

Now let me further entwine my limbs with yours. Let me trace the lines of your back with my fingertips and wrap my palm around the tattered ends of your shins. With my flesh against yours, I shall kiss you while my tears anoint your cheeks.