Unlike the government, Cleveland State is behaving as if it actually cares. 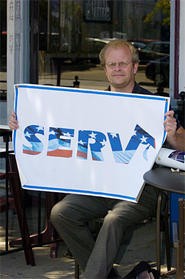 José Rivera could have escaped this war. His four years with the Marines ended in 2001, well before Baghdad's marketplace bombs became staples on the nightly news.

But back home in Cleveland, he struggled to switch from mortar fire to civilian life. He missed the band of brothers he found in the service -- the guys who had his back 24/7, who told jokes that needed no explanation, who had no trouble waking up at 5 a.m. to hit the gym.

He tried to compensate by staying busy -- working as an EMT, taking classes at Tri-C in hope of being a fireman and teacher.

But he still felt like a stranger in a foreign land, so he filled the void by joining the Army Reserves. Two years later, he shipped off to Iraq.

For nearly a year he worked on "psychological operations," mending bad blood between Iraqis and Americans. If there was something he could do for the natives, they'd be less eager to shoot at his guys.

Then an emergency brought him back home to his wife. This time, the war had changed something inside him. He no longer got a rush from running into burning buildings. "It was fun when I was young," he says. "After a while, the risk and danger wasn't worth it."

So he decided to become a nurse and to help other vets find their way. In the process, he found an unlikely cause to champion: his college.

Though military recruiters gush about the tuition benefits new plebes will someday receive, they seldom hint at what else awaits returning vets. The medieval conditions at Walter Reed Medical Center are just the tip of the iceberg. Returning soldiers can wait months for appointments at the VA hospital. Psychological counseling is spotty at best. Getting GI Bill benefits is another hassle. And those wounded in combat face a nightmare of red tape, often waiting years for their disability claims to be judged -- and largely denied.

But Cleveland State, where Rivera enrolled last fall, is trying to show some respect. In August, the university will start classes exclusively for vets. There will be history courses about the countries in which they served, English essays to help them write out their traumas, studies in biological and chemical warfare, and courses on the psychology of battle. They can learn how to heal the wounded and cope with post-traumatic stress.

Most important, they will be together as a unit, recreating the bond Rivera missed when he left the Marines. The idea is that if they can support each other, they'll be less likely to drop out.

"When you have that camaraderie again . . . they all are gonna stick together, and they're all gonna succeed together," says program director John Schupp.

And unlike the government, Cleveland State is behaving as if it actually cares. When vet Ava Taite first called Schupp, she was stunned to receive what veterans rarely get: a call back. For someone who had never served in the military, she found him to be surprisingly empathetic. "Whatever started it, he was developing a heart."

Schupp, a part-time chemistry lecturer, has the infectious enthusiasm usually associated with coaches, not academics. He's the kind of guy who answers the standard "How are you?" with "Happy."

He's known for answering calls at 2 a.m. and has earned vets' respect by doing what the VA doesn't: following through. He plans to bring in companies to recruit and is working to get vets discounts on textbooks.

"He's really into it. He really wants to get this thing going," says Larry Maline of the Cleveland office of AMVETS.

Of course, it's a mutually beneficial effort. Students with GI benefits provide a guaranteed tuition source. And if the often overlooked university becomes known as a welcoming home to vets, it can look forward to growing enrollment and donations from grateful grads and military groups.

So far, Schupp's been successful in selling the program as the first of its kind. In 21 years on the job, Maline has never heard of anything like it. "It's about time something was established to help veterans get back into education," Maline says.

Ronald Smith may be the perfect candidate. The 10-year Army vet did three tours in Iraq. He's now 42 and ready to start a new career. But he's still in the National Guard and wants to stay close to home. Cleveland State is appealing for its student-teacher ratio -- and its tradition of attracting older students.

It was also the only school Smith found with a program just for vets. Though he has little interest in swapping war stories, he hopes to study plant or environmental science, so he can start a farm to teach kids about agriculture.

"I done took so many lives in my life, I want to give back," he explains.

He's exactly the kind of student Schupp is trying to recruit. At a kickoff event, Schupp makes that message clear. "You're not gonna be just a number," he tells the assembled veterans. "We want to help you."