A Legend Points Toward Retirement 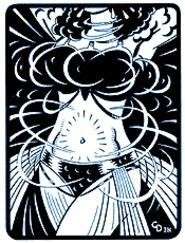 People tilling fields with horsedrawn plows may seem alien to city slickers, but it's not the strangest thing that will be happening this weekend in Holmes County.

"I'm going to do a demonstration on a bed of nails," explains Vernon "Komar" Craig, a manager at Alpine Alpa Restaurant, which will be hosting a "collectors' extravaganza" of memorabilia from Ripley's Believe It or Not and The Guinness Book of World Records. As Komar, Craig holds the world record for the most weight placed upon a man while lying on a bed of nails, a feat he will recreate this weekend. "I'm going to be sandwiched between two beds of nails with six men sitting on top. Then, as a finale, I'll have stones crushed on my chest."

The restaurant -- featured on the 1978 cover of The Guinness Book of World Records for housing the World's Largest Cuckoo Clock -- is a natural place for such an event, but that was not what drew Craig to it. Originally he was the director of grounds and landscaping for the College of Wooster, but when Komar began to take up his time, he had to leave the position.

"What I thought was going to be a one-shot deal back in 1963 turned into a lifetime hobby," Craig says. Oddly, the idea came to him from lecturing. "I did a lot of work with mental retardation. I was even on the committee that set up the Special Olympics program, so I was often asked to speak on work in that field." Craig came up with the Komar bit to liven up his talks, "because everyone can relate to pain."

"I did it for the first time onstage -- never even tried it out," he recalls. "I didn't realize it would have such a repercussion. Everybody said I made it look too easy, but that was because I could "turn off,' as the doctors called it." He has since been prodded by doctors worldwide, the basic upshot of which is that Craig has, as he quotes, "the innate ability to ... control the autonomic nervous system."

But no one ever figured out how Craig's mind blocks pain, and now Komar is retiring. "This is going to be my final show," he says. "I'm 68 years old, and that's quite extensive, having big men jumping up and down on top of you while you're on the nails. And I've worked with doctors and that so much around the world, now it's time to help myself a little bit."