A Life of the Mind!

Something awesome is brewing at Case. 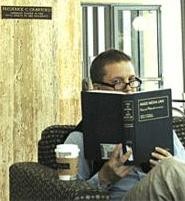 If you read the news, you might believe that Case Western Reserve is in trouble, on the brink of losing its exclusive standing as Ohio's "somewhat elite university."

Earlier this year, President Edward Hundert resigned, after digging a $40 million ditch in the school's treasury. Case recently slashed $33.4 million from its budget and cut more than 100 jobs. And ever since the school's marketing minds ditched "CWRU" in favor of "Case," unhappy Western Reserve alumni have mysteriously misplaced their checkbooks.

Then, last month, The New York Times kicked Case while it was down. In a story about desperate efforts by colleges to attract top students, the paper lambasted Case's SAGES Café, a small coffee shop that opened on campus last year.

But it's obvious Budiansky never visited the café. If he did, he would have discovered that SAGES isn't overhyped at all. In fact, it just might be Case's saving grace.

First, you have to understand Case. As the 37th-best school in the country -- just behind world-renowned University of Rochester -- Case can't just have classes. It has to innovate, or it risks getting caught from behind by the giants breathing down its neck, like UC Irvine.

That's where SAGES comes in. Short for "Seminar Approach to General Education and Scholarship," SAGES encourages students to embrace "a life of the mind." It offers small classes that focus on writing, problem-solving, and other groundbreaking concepts never before seen in higher education.

Amazing, right? It gets better.

To give the program an "institutional and social reality," the university opened SAGES Café. It creates a "social vigor, democratic culture, and intellectual vitality," the school boasts. And it brings people together "in a wealth of fortuitous and unpredictable ways."

Now most colleges have coffee shops. But they're intellectually dead, manned by work-study students who earn eight bucks an hour serving crappy fruit salads. At such lesser cafés, it's fortuitous if you unpredictably see the girl with whom you vigorously made out the night before. But a life of the mind? Not a chance.

By contrast, the intellectual fireworks rain down at SAGES.

"Is this it?" a customer says, flipping through The New York Times as he waits in line. "It's so thin!"

He wears a pastel yellow shirt, tucked into a woven belt. Pens protrude from his breast pocket, which is naked of any pocket protector. The guy's an academic maverick.

The school has gone to great lengths to make it feel like any old college coffee shop -- same tables, same ugly tile floor, same selection of strangely named beverages. But special touches give the place a cognitive ferocity Tri-C can only dream of.

For instance, there's a magnetic whiteboard covered with little words that you can arrange into provocative statements, exercising your mind while waiting for a latte. One person, probably a genius, crafted this bit of literature: "Pickles party down."

Goosebumps, right? Me too.

Such cerebral suppleness is always on tap at SAGES. In the corner, some professorial types are trying to get work done. But the banter is just too lively.

"Do you want to share a fattoush salad?" someone asks.

"Is today fattoush day?" another chimes in.

"Is it Tuesday Fattoush Day?" someone else wonders, and they all have a nice chuckle about that crafty bit of wordplay.

Somehow, the commotion doesn't rouse the chubby guy snoozing pleasantly on the couch. Lying there with no shoes, he looks somewhat homeless. But I know he was up all night, proving impossible theorems. He's living a life of the mind, and he's just plain tuckered.

I wonder: Could that be Nate Jacobsen? I've been thinking about Nate since I saw his name on a whiteboard that read: "Congratulations Nate Jacobsen -- Customer of the Week."

I figure Nate earned the distinction with some fascinating monologue contrasting Darfur and The Amazing Race 5. I ask a barista what one must accomplish to earn such a lofty title.

At SAGES, the baristas are unique brews themselves. They occupy "the special position of the 'storekeeper,'" the school's website explains. They become "repositories of knowledge." Most important, they are "patently not interested in providing grades or passing judgment."

That dick at Starbucks who always writes "C-" on your frappuccino? He'd never hack it at SAGES.

But according to SAGES, Peet offers a "certified fair trade" brew, making Peet "socially responsible." Ergo, as they say at SAGES, Peet is not interested in making money off college kids. Ergo, Peet rocks.

By this time, a couple of café staffers are locked in robust debate. They seem to be discussing the café's feng shui, as they consider the best location for the Customer of the Week board.

I approach a barista to find out what's brewing.

"We try to make it as welcoming as possible," the young woman explains. Her name is Asta, which is very exotic-sounding, which makes her way smarter than that Times guy. She tells me she's only a sophomore, that she got hired through the school's work-study program.

I find this odd. The literature clearly states that the baristas' "expertise in preparing espresso is matched only by their authoritative knowledge of all things SAGES." I doubt that Case would place this vital job in the hands of an $8.75-an-hour teenager. After all, "in the bustling personal-but-impersonal rhythms of campus activity," it takes a highly skilled shopkeeper to serve as a repository of knowledge. Doesn't it?

Before I can ask her about it, Asta is busy whipping up a white-chocolate/raspberry frio. In only a couple of months, the café has transformed this teenager into a young woman, one capable of making fruit drinks.

If SAGES can do that, I know Case can hold off UC Irvine, no problem. I praise Asta for her maturity and restraint. A budding intellectual indeed, she remains humble.

"They're ordering coffee," she says. "They're not telling me their innermost secrets."