Sixteen tons and whaddya get? 100,000 watts of Christmas at Nela Park. 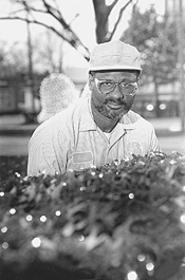 Wrapped from trunk to tip in blue electrical wires, the tree appears to be in the advanced stages of a fungal infection. But when the switch is flipped, triggering miles of extension cords, it'll just look pretty.

"See this tree?" says Heather Wilson, admittedly a taskmaster when it comes to "lacing" shrubbery with lights. "It took a lot of time. Two days just for this tree." The project manager for General Electric's time-honored lighting display at Nela Park, Wilson is the one who hears it from the higher-ups if there are any gaps between the twinkle bulbs on the hedgerow.

Besides the satisfaction of knowing the icicle lights don't look like they were hung by neighbor Bob's nephew, the perks of Wilson's job are subtle. Being able to say "that elf is crooked" with authority. Ordering jumbo tinsel bells like they're going out of style. Much of her day involves pointing skyward, where workers on lifts and ladders splice strings of rainbow midget bulbs and reposition recalcitrant reindeer. Her blood practically glows incandescent -- her great-grandfather was a bulb blower for Thomas Edison, her grandfather a foreman at GE's Pitney & Cleveland Bulb, and her father an engineer at Nela.

This is Wilson's first year as lighting diva -- she has a college degree in lighting design, with a specialty in halogen/incandescent lamps. When she took charge, her first act was to order boxes of sample lights (the champagne glow bulbs that flicker and the crystal globes with snow flurries inside), so she could see what hues they burned, rather than guess from a picture on a cardboard box.

Another part of the prep work: inventorying props from past years -- wizards and nutcrackers, carousels and polar bears, all warehoused in a former factory on Noble Road, in the shadow of behemoth machines that recall ancient locomotives. They were low on jingle bells, heavy on snowman cutouts.

Recycling the snowmen was a no-brainer. Snowmen adapt. Last year, they garnished a winter wonderland scene. This year, they're mingling with giant snowflakes and cut pine trees in a "Frosty the Snowman" panorama.

Down the road, the Cuyahoga Lamp Building is soaked with deep blue floodlights, culminating in a night sky display with star clusters and a crescent moon. Workers in the building pull down their office blinds each night, so their windows won't interrupt the nightscape.

Wilson started designing this year's displays in April, incorporating recycled props and new ones. In September, her crew of craftspeople and laborers really got busy, setting up the more inconspicuous string lights first, then the wooden figures and the cut trees.

Nerves fray in November. Every day, Wilson makes the rounds, inspecting the light crew's handiwork, vetoing a laborer's suggestions about the positioning of a wreath, or poring over a cartoonish Victorian doorway nailed over brick.

"Heather's the top person, as far as we're concerned," says Mark Larkin, who's been setting up the displays for 22 years, starting as a laborer at Nela when he was 18. Now, as a facilities manager, he's the foreman for Wilson and her lighting crew of 15. "When something doesn't get lit up, she may yell at us, but the manager always yells at her.

Out at the machine graveyard, Larkin tries to talk over an accelerating chorus of industrial zaps and buzzes. It's a particularly dead drone, coming not from any task at hand, but from the fluorescent lights overhead. Even in 1977, when Larkin started at GE, the building was a ghost factory, a holding cell for retired metal mastodons.

"Sometimes I imagine how this plant looked at full production," he says. "It must have been something to see." He studies a mold machine: an iron dinosaur that heaved, moaned, and in spite of its bulk, spit out dainty lightbulbs. "You would think GE is just selling a 29-cent lightbulb, but the making of the lightbulbs is more than what a lot of people think."

Larkin remembers that, when he first worked at Nela, "if you were not here 10 to 15 minutes before starting time, you could not park. And if you were, you had to park way in the back." Now, parking is not a problem, and the staff is much smaller, though a full grounds and maintenance crew keeps up appearances, manicuring the lawn and polishing "Mr. and Mrs. Mazda," two godlike bronze figures touching torches on the front facade of the park's Lighting Institute.

Larkin even remembers when he didn't work here. In the 1950s, the park was practically a self-contained city, with bowling alleys, a barbershop, and a full-service resort, where employees could spend their vacations in air-conditioned tents. The prototype for today's suburban industrial park, Nela was set "way out in the country," which at the time (1911) was East Cleveland. It had its own subway, and up until the 1960s, the gates were always open, and the public could stroll the grounds.

Specifics of the Christmas displays are tougher for Larkin to remember, the years running together on a red and green river. "My mind is two months long," he says. "Anything past two months, and it's a blur.

"The hardest time we really had was a couple of years ago," he says. "We had a wall of lights and a river of lights. And we went from Terence Road all the way to Helmsdale with the lights. It was beautiful. [The Illuminating Company] just loved that one. We were able to do it, but that was a lot of jumping around."

The weather was colder than it has been in recent winters. "You go out there in the morning -- it'd still be dark -- and splice wire together in the cold. You have to take the gloves off, and then the stuff gets lost in the snow, and you have to dig through the snow.

"If your boss wants to punish you, he puts you on a lift, which means you can't move; the wind cuts through you. If you got to get anything, you have to come down off the lift. And then your hands get really cold -- to the point that, when you try to warm them up, it hurts. That may be the first sign of frostbite, so you have to go inside. But you also have to finish the job, because you're on some other schedule. That's why we light a candle for this warmer weather."

Terry McGowan, a retired GE lighting applications engineer who had Wilson's job in the 1970s, remembers the year when they literally had to light a candle. That was the worst. During the energy crisis one December, they had the display all set up -- months of work -- and President Nixon announced that it would stay dark. They couldn't even turn it on once, just to look at it. "It was such a disappointment."

One time, says McGowan, to find a short circuit, they had to start a small electrical fire. Yet another year, the display was so grand that they didn't have enough electricity on the property to light it. "We needed new switch gear and had to get more power, so we installed another transformer. Can you imagine all the questions we would have had if we had to dim our lightbulbs? That would have been a terrible story! "GE can't afford the electricity to turn on their own lights.'"

Wilson hasn't had time to encounter many problems yet, but her duties are very similar to those of her predecessors, who date back to 1925. That was the year of the first Nela Park lighting display -- actually, the first outdoor lighting spectacle ever, anywhere, becoming a beacon for tacky next-door neighbors the world over.

That year, consumers were still grappling with the decadence of a pine wreath placed over the hearth, let alone outdoor lighting. But they caught on quickly, motoring in droves to Nela, where they slowed to 2 mph to fully appreciate an illuminated gingerbread man that they could purchase at Woolworth's for their front yard. And so, a tradition was manufactured.

"When Christmas lamps became available, nobody knew how to use them," says McGowan. "There was very little outdoor decorating. GE saw that as an opportunity to increase their sales, and as an example, they put up big displays around Nela Park."

The ploy worked. "We used to go around Cleveland and see ideas from the previous year's displays in the front yards," says McGowan, who crafted artificial Christmas trees from pie pans and wind chimes from pieces of aluminum and electrical conduit for his displays. "One year, we used purple as one of the lightbulb colors -- thousands and thousands of purple lights -- and the next year, they couldn't keep purple lights in the stores."

For years, when people wanted to see the light, they looked to Cleveland, where Charles Brush, father of the arc lamp -- which a marveling Mark Twain once compared to "bright moonlight" -- started his Brush Electric Company, a direct predecessor of GE.

Larkin would prefer the real moon. "You don't see too many Christmas lights on my house," he says. "When it starts to get cold, you never warm up, and by the time you finish a 10-hour day, you go home, and the next day you're back out here in the cold.

"I read in the paper where people really light up their homes, and I say, "Wow, did they hire a crew to do it?' Because I know one person cannot do it."

As tradition dictates, at Friday's lighting ceremony, the star atop the towering Christmas tree illuminates the brightest. Larkin will be in the crowd, holding his breath, thinking, "If it don't light up, I'm in trouble."

Laura Putre can be reached at lputre@clevescene.com.