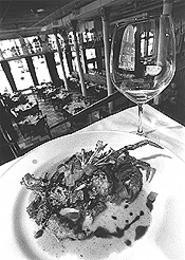 Clevelanders are blessed as never before, with not one but two burgeoning enclaves of fine dining: trendy Tremont and the urbane Warehouse District.

Tremont is hip, no doubt about it. But as a child of the rolling Cuyahoga Valley, whose comfort depends on the opportunity to snuggle my back up against a grassy hill or rocky ledge, I feel more psychically at ease on the little plateau that is the Warehouse District. Here, with the crags of Tower City sheltering me on one side, Lake Erie on another, and a steep drop to the familiar river on a third, I feel embraced. Add to this the concentration of good restaurants, clubs, and cafés, and the district gets my vote for the most compelling dining destination in the area.

Then again, maybe it was just the wine talking, as I sipped a glass of bubbly with a Saturday night companion and watched the soft parade pass by the windows of the Blue Point Grille. When I tired of watching the stretch limos, horse-drawn carriages, and expensive Beamers cruise past, I turned my attention to the elegant main dining room itself, with its restrained nautical motif and cobalt-and-gold color scheme played out against red-brick walls swathed in shimmering light. A line of tall, Corinthian-capped pillars stretched upward to support the restaurant's remarkably high ceiling, while fringed satin draperies, embroidered with golden stars, hugged the floor-to-ceiling windows. A broad staircase rose to a second-story loft with seats for another 40 or so diners. Yet despite the room's cavernous dimensions, nearly every seat looked comfortable and cozy.

In addition to this main dining area, with its partial view into the semi-open kitchen, the restaurant also has a smaller, darker, but equally attractive room that is home to a massive mahogany bar and a double line of man-sized booths. The two dining spaces are separated by a foyer and a series of etched glass panels, one of which contains the following words of wisdom: "Voro Ostrifer Amor Diutius." Eat oysters, make love.

Oysters, of course -- the plump Atlantic blue points -- are the restaurant's namesakes and are available from a daily raw bar menu. Too bad we never made it that far, having been seduced immediately by two cooked oyster appetizers: the delicately decadent Jake's Oyster Bake and the imperfectly executed Crispy Fried Oysters. The first dish found four baked Washington State oysters (three large ones and a midget) on the half-shell, settled on a bed of rock salt and garnished with colorful slices of lime and lemon and sprigs of feathery dill. Each succulent little oyster had been drizzled with a bit of champagne cream and topped with a smidgen of earthy melted Brie, making for as dainty yet arousing a taste combination as could be imagined, especially when paired with the aforementioned flute of sparkling wine. The dish was finished off with two warm spears of yeasty butter-and-garlic drenched baguette, just right for dipping into the shells to sop up every satiny drop of the combined juices.

As for the "crispy" critters, the five plump breaded oysters were delightfully sweet, moist, and barely cooked through; however, their very thin layer of limp breading was far from crisp. We were also disappointed in the Blue Point's Jonah crab cake: a fat, bready pancake that my companion justly described as having the taste and texture of "crab-flavored stuffing mix." On the other hand, we were crazy about the Asian-influenced slaw and sweet-and-sharp honey-mustard sauce that underpinned it.

Happily, a cup of Blue Point Chowder has always been a treat. The silken cream base is chock-full of big chunks of tender clam, as well as finely diced potatoes and specks of red, green, and yellow peppers, which add eye appeal as well as a sweet and summery flavor. A cup of homey vegetable beef soup -- a weekday luncheon's soup du jour -- was likewise excellent, with a robust flavor and plenty of mellow vegetables and meat.

Executive Chef Jim Gillison continues to oversee operations for Blue Point, which is one of several Cleveland-based Hospitality Restaurants properties, including Rocky River's Salmon Dave's Pacific Grille, the Cabin Club in Westlake, and the as yet unnamed restaurant going into the Caxton Building space previously occupied by Pete and Dewey's Planet. However, day-to-day kitchen duties have fallen on the broad shoulders of 23-year-old super Sous Chef Rocco Whalen, a local who has spent the past four years making good with Wolfgang Puck in Phoenix and L.A. hotspots. Whalen recently brought his California-honed Pacific Rim sensibilities back to Cleveland and is responsible for the menu's new and distinct Asian accent, which extends from Grilled Shrimp Salad with Chinese greens to Salmon Tsunami with wasabi mashed potatoes.

But regardless of its culinary twists, impeccably prepared fish remains at the heart of Blue Point's menu. Among the recently sampled highlights was an entrée special of sautéed orange roughy on roasted redskins, capped with a salad of mizuma greens, chopped mango, rock shrimp, scallops, Jonah crab, and corn, and drizzled with a sleek red-wine butter sauce. Although orange roughy is generally most notable for its mild flavor and delicate texture, this thick filet had been so heartily seasoned with fragrant Creole spices and came to the table so sizzling hot from the skillet that it nearly knocked my argyle socks off. We liked the cool and crispy contrasting goodies that topped it, too, although we wouldn't have complained if there had been a bit more shellfish in the mix.

Nags Head Grouper Sauté, an old Blue Point favorite, was more delicate but equally delish, with an ephemerally light filet centered atop a mountain of lobster-studded mashed potatoes and sided by little lakes of velvety chive veloute sauce. And a simply prepared filet of Bay of Fundy Salmon, skillfully blackened until its natural juices formed a savory, fragile crust and its interior reached a succulent medium rare, was bliss on a dish, especially with the big pat of lemony herb butter that ran in melting rivulets down its sides.

A luncheon serving of grilled shrimp and scallops failed to keep pace with the other seafood fare, however. While they were tender enough, the three shrimp and two large scallops that made up the dish lacked flavor, beyond a pleasant smokiness from the grill. On the plus side, they were served on a bed of those flavorful, unadulterated mashed potatoes and sided with perfectly done haricots verts and a few sweet baby carrots, on a plate dressed with a sprightly garlic-butter sauce.

Entrées come with an assortment of very good breads from Cleveland Heights's Zoss the Swiss Baker, accompanied by cunning little florets of molded butter. Several à la carte salads are listed on the menu. However, the House Salad, a simple toss of mixed greens, blue cheese, and croutons that our server offered, wasn't among them and, at an additional $5, made for a pricey surprise when the check came.

The Blue Point's large, well-written wine menu makes for entertaining reading, with lots of premium and special-occasion alternatives that run into the hundreds and even thousands of dollars. Still, there are several moderately priced whites and reds from which to choose. We felt as if we had snagged a good deal in a $10 split of Domaine Chandon Brut Cuvée, from Napa Valley.

The selection of desserts here is short and sweet, with an exceptionally light and rich vanilla crème brûlée that, on one visit, came loaded with sweet raspberries. Also noteworthy was the Key Lime Tart, a thick but tender shortbread-like crust with a filling of zippy custard, topped with a dab of heavy whipped cream and served on a grid of raspberry-and-mango coulis. And chocolate lovers will approve of the Chocolate Entremets: silky Bavarian cream studded with Oreo crumbs and layered onto a crust of chocolate cake.

At both lunch and dinner, we found service to be almost flawless, with professional but not standoffish servers who seemed to anticipate our every need. Tables were kept crumbed, clean flatware accompanied every course, water glasses were always topped off, and even our votive candle, which had gone up in smoke during the course of our meal, was spirited away and unobtrusively replaced with a new one.

It is with good reason that the Blue Point has anchored the ever-changing Warehouse District for the past two years. Even without the suggestive Latin phrase-making in the foyer, the elegant ambience and Whalen's seductive cooking almost guarantee a night of sensual delight.