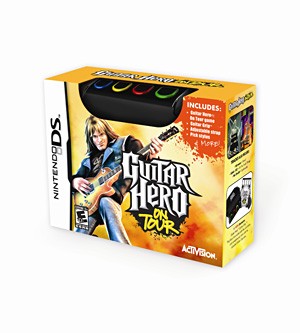 This video game for the Nintendo DS makes it easy for us to get our Slash on practically anywhere. Like the original Guitar Hero, the portable version is all about hitting the right notes and rocking out. Bonus points for the cool guitar-pick stylus. Besides, it sure beats hauling our Xbox outside.

The R&B singer is pretty much known for two things: getting naked in the "Untitled (How Does It Feel)" video and writing a love song to weed. This 17-track greatest-hits set shows he has plenty more to offer. D'Angelo's two albums make up the bulk of this collection, but soundtrack cuts, duets, and other rarities also turn up.

Nelson's Great American Songbook masterpiece celebrates its 30th anniversary by tagging on an extra disc filled with other way-old-school faves that the country legend recorded over the years. They're all good songs, but none of them tops the original 10-track album, a generations-spanning milestone that still delights.

The first disc of this two-DVD set spotlights a 2006 concert that includes a few songs that were originally recorded by New Order back when it was still known as Joy Division. The second disc is better, featuring concert clips from the '80s, including some from the group's first gigs in 1981.

The arcade classic gets an update for the PSP and Nintendo DS, complete with a techno soundtrack and bonus games. The super-busy graphics can be seizure-inducing (thankfully, they can be turned off), but the high-energy game play is still as thrilling as it was in 1978.