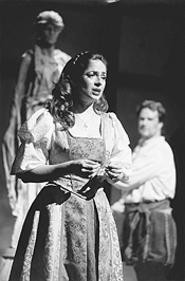 For those who want the good news right away: The Firebrand of Florence (which hadn't seen the light of day since 1945) is sumptuous, splendiferous, and potentially sublime.

It's been unearthed by the Ohio Light Opera at the College of Wooster, which is the only professional company in the U.S. devoted entirely to operetta. It not only performs the complete Gilbert and Sullivan repertory, but also revives rarely performed continental works of the nineteenth and early twentieth centuries.

The music for Firebrand is by Kurt Weill, regarded by many as the greatest twentieth-century composer to write for the musical stage, American and European. Lyrics ("If only her name were Olivia, she could be a cute bit of trivia") are by Ira Gershwin, one of the holy trinity of Tin Pan Alley bards. (The others are Lorenz Hart and Cole Porter.)

The book by Edwin Justus Mayer is a romantic concoction, based on a popular swashbuckling play of 1924. Set in Florence in 1535 (an excuse for lots of velvet britches and low-cut bodices), it concerns roguish artisan Benvenuto Cellini and his merry bounce between the hangman's noose, a lascivious duchess, an exhaustingly virtuous maiden, and an imbecile duke. It is candy-coated skullduggery with a touch of rueful amore, and it all melts into Weill's lush melodies like a chocolate cream in the sun.

Written by the composer and lyricist who gave the world the magnificent Lady in the Dark, the show is imperative viewing for all dedicated aficionados of musical theater. The only legitimate excuses for missing it are (a) Peace Corps duty, (b) family crisis, (c) death, (d) all of the above.

Now, for more diligent readers, some background. Blow off the dust and page through Richard Traubner's Operetta: A Musical History, and you'll learn about a gracious musical style of yore, replete with "lilting melody, flowing champagne, ceaseless waltzing, risqué lyrics, Ruritanian uniforms, glittering ball gowns, romancing and dancing, gaiety and lightheartedness, sentiment and schmaltz." Operettas were the European lace valentines of our forebears. Since the 1950s they have been on the endangered species list because of generations weaned on rock, jazz, and hip cynicism. Even though operetta traces can be found in musical descendants ranging from Show Boat to A Little Night Music, its pure form has become as esoteric as the corset.

However, all is not lost, for Northeastern Ohio has become a Shangri-la for the world's discarded treasures. Downtown, at the Rock Hall, the culturally famished can seek edification by viewing the eyelashes of Diana Ross's Supremes. In rustic Wooster, those who bask in the glow of Jeanette MacDonald and Nelson Eddy's "Ah, Sweet Mystery of Life" can sip melodic revivifying waters.

In the past, some of these endeavors have had the slightly threadbare quality of a lady's sewing circle benefit. Starched acting, a squeeze-box orchestra, curdled coyness, and antique jokes — combined with tenaciously adorable sopranos and embarrassed tenors in lederhosen — brought to mind the I Love Lucy operetta spoof The Pleasant Peasant.

No more! New artistic director Steven Daigle has lifted his wand, and as if by magic, there are lively, sparkling choruses dancing with a springtime lilt and an orchestra directly from Mount Olympus.

Aside from the usual Gilbert and Sullivan and Viennese schmaltz, they have given us The Firebrand of Florence, an ethereal musical treasure that had been submerged in a watery grave since its 1945 45-performance debacle. This was due to leaden direction and a cast labeled as amateur, plodding, and without luster. At a time when corn-fed Americans yearned for the patriotic heartiness of Oklahoma!, a satirical, continental, costume operetta with jokes about hanging (There are those who have me baffled: They refuse to choose the scaffold! To die in bed than hang they'd rather") and a sexual insouciance approaching Boccaccio was about as welcome as a Third Reich film festival. Gershwin's witty Algonquin Round Table lyrics and Weill's lush music were too heady a brew for American provincials.

The Ohio Light Opera production, staged by artistic director emeritus James Stuart, is the first major step in restoring this work's honor, lifting it up toward the pedestal where it rightly belongs. In an ideal world, it would have been a million-dollar production with A-list golden-voiced stars from the Met and Broadway (an Alfred Drake of yesterday or a Kevin Kline of today, a Kitty Carlisle or a Dawn Upshaw on the distaff side). Needed are the brand of performers who create lifetime memories for audiences.

Here we must be grateful for ingenuity on a budget — Florence on the head of a golden pin, as it were — enacted by still wet-behind-the-ears performers with a certain knack, who are merely warm, likable, and pleasing in a work that deserves sublimity.