A Sweeney With Heart 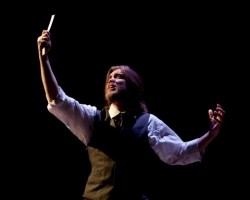 Black History Month is in full swing, which means our theaters are filled with thundering gospel. But it wouldn't hurt the name of diversity to acknowledge a less well-known but equally significant celebration: Oy Vey Shanah. For civilians, this is a secular festivity honoring Jewish aggravation, a time for performers to dance to Woody Allen's neuroses, chant Groucho Marx insults, don Barbra Streisand false noses and indulge in all things Sondheim.

This year's award goes to Martin Friedman, artistic director of Lakeland Civic Theatre, who has been prone to Sondheim mania ever since his parents took him to the original Broadway production of A Little Night Music. His seventh offering at the altar of Stephen is Sweeney Todd: The Demon Barber of Fleet Street, which was waylaid by the director's heart surgery last year.

In the oven since then, the production reveals how much thought, love and care Friedman has poured into the ingredients that can make Sweeney such a savory experience. In the three decades since its premiere, the work has established itself in legitimate theaters and opera houses, not to mention musical mavens' psyches. Friedman has found a creative way to scale down this massive piece to fit Lakeland's intimate theater. Picking up on the show's motif of a legal system gone awry, the director cunningly sets the production in a netherworld trial being re-enacted for an onstage jury. Each principal character swears in on a Bible.

The concept is extremely theatrical, focusing the action and enhancing the metaphor of justice undone and avenged. Effectively expressionistic in a Brechtian manner, the production's characters seem to have been drained of blood even before the show starts. It's leanly and tellingly staged, especially with a Sweeney who projects a hollow-eyed, Rasputin-like megalomania and a Mrs. Lovett who flaunts her rampant sexuality.

In these roles, two performers who have specialized in subversive naughtiness for years reach the pinnacle of their mischievous art. Never has Dan Folino shown such presence, physically or vocally. His Sweeney bores into the audience's soul with sinister intensity. Folino sings the role with a generous baritone bravado that Johnny Depp couldn't achieve in the splendid movie version.

Alison Garrigan's deliciously buxom, auburn-haired Mrs. Lovett is a force of nature with a permanently sensuous pout. She eschews the character's usual maternal instincts for something far more tantalizing and nefarious. One doesn't expect to find a cast of such stellar abilities buried in a far eastern suburb. Even the demanding Sondheim likely would find this ensemble up to musical snuff. Among the take-home souvenirs, Lindsey Sandham's translucent delicacy as Johanna stands out. Somehow, the director has managed to unearth surprising tenderness among all the grand guignol horror, including several after-death reconciliations. A year after he came face to face with his own mortality, Friedman has given new life to one of Broadway's darkest thrills.

MEANWHILE, the Cleveland Play House has concocted a Martin Luther King variation on a theatrical ponzi scheme: Mahalia, a so-called bio-musical on the life of the great gospel singer Mahalia Jackson. The show features an automaton heroine, NaTasha Yvette Williams, who vocally out-Mahalias the real thing. There's a method to the mediocrity: Each performance utilizes a different local gospel choir. It's more a celebration of choirs than it is musical theater, but just think of all those holy bucks rolling in. Sweeney Todd Through February 22 Lakeland Civic Theatre 7700 Clocktower Dr., Kirtland Tickets: $13. 440.525.7526