A Taste for History 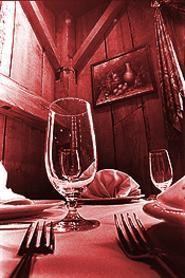 Along with raindrops on roses and whiskers on kittens, historic Ohio buildings rank high on the list of my favorite things. Pair one up with the promise of a good meal, and not even the threat of bee stings is likely to keep me away.

I tell you this by way of explaining a recent trek to the far side of Mentor, to dine at The Sawyer House, which opened in January. Yes, by gum, it is a long way to go for dinner, but the opportunity to get inside the aged but still indomitable 1843 sandstone farmhouse (which in past years has served as a sub shop, a rib joint, and a garden center) was too good to pass up.

Additions slapped on by former owners are not particularly true to the home's original character -- most notably the large, ungainly wing that rambles off to the east and now holds the main dining space. And the bright new decor, although quite pretty, is anachronistically Victorian, with an abundance of brass, frosted glass, glossy woodwork, and a hunter-green-and-burgundy color scheme. Still, a number of delightful touches have been incorporated into the interior, including the use of the massive former exterior wall as a divider between a smaller dining room and the sparkling bar, the original storm cellar entrance that occupies a corner of the main dining room, and a series of eight pulley-driven ceiling fans that fascinated the mechanically inclined diners among us. The charming interior will also provide the perfect backdrop for lush Christmas decorations, we're guessing, when we can imagine the restaurant all atwinkle with white lights, velvet bows, and evergreen branches.

But as to the other half of the equation that drew us here -- the possibility of good food -- we are a little less sanguine. The menu, developed by a now-departed chef, mostly treads safe ground, with steaks, chops, and seafood at its heart. Former sous chef Eli Kratzert has recently taken over the kitchen's top spot, however, and promises the menu will get a complete overhaul in September, with greater emphasis on seasonal foods and fresh, housemade items. Nonetheless, during dinner on a quiet Saturday night, neither ingredients nor execution proved to be consistently top-notch. For example, a hefty 16-ounce pork chop, buried beneath a tasty caramelized onion confit, proved surprisingly fatty yet flavorless, despite being served bloody rare. And while we admired the use of trendy rainbow chard beneath the chop, the colorful veggie was undercooked and unpalatable. On the plus side, the kitchen did some of its best work with one of the menu's few really innovative items, an appetizer of graham-cracker-crusted calamari drizzled with a mild curry-and-coconut aioli and garnished with shaved coconut. The dish is one that Kratzert himself developed and, with its mellow, slightly sweet flavor, it was a delicious departure from the standard Italian-seasonings-and-marinara versions that abound on area menus.

A fairly traditional gazpacho was also good, if a tad understated, with a cool, satiny tomato broth filled with bits of chopped onion, red and yellow pepper, and zucchini. The soup was attractively garnished with a broad stroke of what was reported to be cilantro-and-jalapeño-flavored sour cream; however, we wish the kitchen had turned the peppery heat up just a little. But we had no complaints with the cheese board du jour, a generous serving of mellow Saint André triple-cream cheese, robust Danish blue, and dill-flecked Havarti, accompanied by a host of assorted wafers and a sprinkling of blueberries, strawberries, and sweet red grapes.

The menu's 10 entrées come with a simple house salad of mixed greens spruced up with slabs of cucumber, a few grape tomatoes, thin rings of red onion, and a couple of giant croutons, all tossed in a well-balanced balsamic vinaigrette. And we enjoyed the thick slices of warm and crusty Italian bread that were served, along with sweet butter and a little pot of zesty pesto butter, from a large basket by a designated staffer.

Our own garrulous server was more than happy to share his menu recommendations. We took him up on the not-so-great pork chop (and earlier on the right-on calamari), but chose chargrilled salmon over the recommended swordfish special. This turned out to be a mistake, since the salmon was as disturbingly strong-tasting a piece of fish as we have ever tried to put a fork to. On top, a very nice cucumber-dill sauce was far too mild to disguise the fishy taste and odor, and we threw in the towel after only a few nibbles. The dish, given a topknot of mostly fibrous fried leeks, was improved not a whit by a dry-yet-mushy side of curried rice and a few bland chunks of summer squash and eggplant that couldn't be resuscitated even with a vigorous salting. (Salt and pepper weren't on the linen-draped and candle-bedecked table, but were provided upon request.)

Happily, an order of pan-seared walleye, coated in a tender potato crust, was much better. Moist and delicate, the fish was topped with a few sliced button mushrooms and a bright butter sauce seasoned with white wine and freshly squeezed lemon. On the side were a few more chunks of the tasteless squash and eggplant -- a negative -- and a serving of perfectly creamy, smoked-bacon-studded grits -- a plus.

We also liked the prime rib, a featured weekend special. The large, juicy, and typically well-marbled piece of beef, served with a cup of pungent horseradish cream, was appropriately tender but satisfyingly hearty. The entrée also included a very good baked potato of medium size (served whole, sans butter or sour cream), but we were surprised that no green vegetable of any sort was included. Not only would the flavor contrast have been welcome, but also the plate of all-brown foods needed something with a little color -- carrots? chard? a lettuce leaf? -- to make it shine.

The hit-and-miss quality of the food continued with dessert, where an unusual creation of firm but ripe chocolate-dipped bananas, served with a tiny scoop of rich dulce de leche ice cream, was nearly ruined by an oddly acidic mango coulis. Then there was the very good strawberry shortcake, built around an excellent, finely crumbed buttermilk biscuit topped with fresh, judiciously sweetened fruit, thick whipped cream -- and a tiny little moth, which frolicked merrily among the berries until it was eventually detained and turned over to the kitchen authorities. (We didn't get an apology, exactly, from our chatty-and-then-some waiter, but the item was taken off our bill.) The only unqualified success was the enormous Summer Berry Parfait, an oversized goblet filled with mellow vanilla yogurt, crunchy but light-textured granola, and neatly arranged layers of strawberries, blueberries, blackberries, and raspberries, all capped with a spiral of whipped cream.

While it's clear that The Sawyer House's present staffers, including owner Bob Wantz and GM Bob Merkle, are a well-intentioned lot with sincere hopes of developing their attractive restaurant into a fine-dining destination, they aren't quite there yet. For starters, it wouldn't hurt to coach the servers in the finer points of friendly but unobtrusive service. And even more important, consistent effort needs to be taken in the kitchen to ensure that ingredients are fresh and dishes properly prepared and flavorful; ideally, as Kratzert exerts more control, these issues will get ironed out. Once that's accomplished, diners with a taste for history may be eager to beat a path to this Mentor landmark.