A Touch of Glass

Radio host comes to town with a Bush-hating gay man in tow. 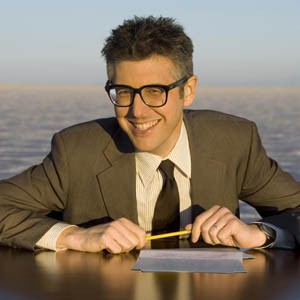 A lot has happened to syndicated public-radio host Ira Glass since the last time he performed at Playhouse Square two years ago. First, he relocated his longtime show, This American Life, from Chicago to New York; then in March, Showtime unveiled a TV version of the popular radio program. “The move was entirely about the television show,” says Glass. “My most senior producers wanted to move. It became a choice of losing them or letting them work [in New York].”

Glass will share the stage tonight with gay essayist David Rakoff, who regularly contributes commentaries to This American Life. They’ll talk about the TV show, which retains the radio program’s basic setup of various narrative accounts revolving around a single theme. “It’s fun, but finding stories that work in [television’s] style is a challenge,” says Glass, who hosts the Showtime series. “You need to do it in more of a present-tense kind of way. You have to let it unfold while the camera is there, which pushes you to a particular kind of story.” Meanwhile, Rakoff will discuss and skewer recent right-wing best-sellers, while Glass spins music in the background. “To be onstage with him is crazy,” says Glass. “He’s not irreverent, but there’s something wry, gay, and Noel Coward-ish. That’s the only personality he has.” www.cuyahogalibrary.org.
Wed., Oct. 24, 7:30 p.m., 2007