A Truth About Cats And Dogs

In The Hospital Hierarchy, Doctors Aren't Always On Top 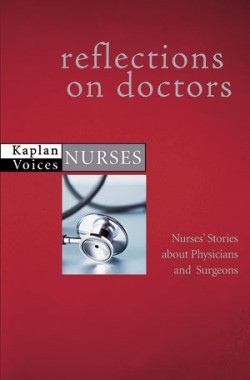 Mornings are not supposed to smell like burning flesh, with wispy twirls of flesh smoke moving sensually and methodically toward the cluster of operating-room lights. Morning sounds should not be muffled weeping or verbalized grimaces. The sounds of morning should not allow the normalcy of the electric saw making its way through the guardian bone of sternum, thus literally exposing someone's heart to the world. Yet for me these were my mornings for more than 25 years.

This setting, barbaric in any sense of the word, was the backdrop of my experience as a cardiothoracic surgical RN (formerly) on the open heart and heart transplant team at Cleveland Clinic. These ORs were my battleground and playground. Those experiences and visuals, and their accompanying sensations - good and bad - became the foreground of my holistic collage. The fugitive truth is that those sounds, that weeping and those grimaces by patients (and staff alike) become talismans that nurses and surgeons carry the rest of our respective lives. Often, I viewed the surgeons I worked with as automatons in the OR. And, indeed, some surgeons acquire this "distancing" veneer in order to do the necessary work.

In our cardiothoracic operating rooms, an overarching competitive environment exists. Arrogance, entitlement, outstanding talents (nurses and surgeons) and palpable confidence dominate the operating-room suites. A nurse pushes herself or himself through this encompassing fog of testosterone. I say testosterone because the surgeons, the ones who are in charge, are all male. To work in this environment, one has to have the personality and the chutzpah- the balls - to think quickly and react perfectly. Weakness or hesitation is normally not considered an option.

So it was with great surprise that I was approached one late evening, as I sat at the cardiac control desk, by a new staff surgeon who had lost a patient. During the exchange, I came to realize how remarkable the distancing has to be in order for this new staff guy to do his job and perform extraordinary feats of surgery. I also realized in those moments that I was the one who resided in a protective callus acquired from years of experience, years of death and the pain of knowing. My sense of efficacy allowed that this OR death and its cognitive talisman would be one of many that he (like me) will carry the rest of our lives in our efforts to help others.

In this one illuminating moment, the distance and power dynamic between the two forces, that of nurse and doctor, are somehow bridged. Here we are one. The hospital-induced power differential is turned on its head, as I, being the experienced nurse, am deemed the wise one, the resource and a confidante. There was simply, in our communication, the active current of humanness that permeated the space between us.

He stood before me, crushed and battered at his first operating-room death. He wept openly before me, making me uncomfortable. I am accustomed to fits of rage, screaming, yelling, sulkiness and a bit of (OK, a lot of) berating for the failure, the mistake and falling short of expectations and the realization that they (heart surgeons) too are simply human.

He may realize that no matter what surgical algorithm he performs on patients, some will rightfully die. This is not an indictment, or an acquiescence of hope, but simply the reality of man versus destiny or a divine force.

This OR beckons to those patients who have no place else to go. Those who have been told by the second and third opinion to "go home and comfortably die." We are the last hope for these extremely high-acuity patients…and sometimes their last stop. Although many of the patients know this upon entering our OR, their families do not always understand.

Years ago, the surgeons appeared to love the thrill of the cases that were deemed impossible and time-consuming. Those guys were machinelike, churning out successes and making history. The newer guys are more…human. They desire success, but not at the expense of their family and a life. So, I am heartened by this surgeon's 21st-century attitude. It is an attitude that, at least for now, shows that he does not need to step on me or my fellow colleagues. He is young and not yet institutionalized to the vagaries of our power hierarchy. Now he is willing to show his vulnerability.

I wonder what this new surgeon's - the one with the size-eight hands - reaction will be in, say, 10 years or even a year from now. I wonder if this loss will be his "Moby Dick" in the continual pursuit and war against heart disease. Which patients will stay with him and further hone his skills with their respective challenges? Which patients will leave the remnants of themselves forever on his psyche … as they have left the talismans of themselves on me? Right now, he and I are partners. Adrienne Zurub is a former Cleveland Clinic nurse. This essay appears in the new book Reflections on Doctors: Nurses' Stories About Physicians and Surgeons (Kaplan Publishing). It also appeared in Zurub's Notes From the Mothership: The Naked Invisibles, published in January 2008. Zurub blogs at adriennezurub.typepad.com. freestyle@clevescene.com