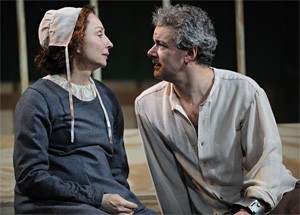 In human beings, there is a pestilent and deliciously stimulating tendency: the thrill of banding together and declaring other people evil or outcast. And no play has explored this phenomenon as well as Arthur Miller's The Crucible, now being given a riveting staging by the Great Lakes Theater Festival.

The play, an extended allegory for the post-World War II "Red Scare," had a very personal genesis. Miller himself had been subjected to grilling by the vile House Un-American Activities Committee and cited for contempt of Congress for refusing to name fellow writers who had attended a communist meeting years before.

The Crucible turns that political witch hunt into a literal one, as a number of girls in Salem, Massachusetts, in 1692, band together and start declaring that there are witches in their midst. Of course, at that time there were plenty of tragedies to go around, such as babies dying in infancy. "Witches" became handy scapegoats, especially since there was no evidence required for a conviction, but only an accusation. Any protestation of innocence was considered further proof of guilt, and the penalty was death.

This admirable production throws all the emphasis on the actors and Miller's words, since the set design by Narelle Sissons is almost painfully plain. Constructed from unpainted plywood sheets, a large room that fills the stage subtly morphs from a house to a courtroom to a cell, with only the barest suggestion of furniture. Naked fluorescent tubes are the only anachronism, stabbing the eyes as if daring you to keep watching.

But watch you must, as the talented Great Lakes company, under the direction of Drew Barr, brings Miller's words to life with compelling power. Andrew May, raging and helpless as John Proctor, and a quiet Laura Perrotta, as his wife, make the confusion and desperation of this quite ordinary couple visceral and vivid.

While some of the declarations of the townspeople get a nervous laugh ("I saw her flying over the barn!"), there are few chuckles when Aled Davies, as the righteous Deputy Governor Danforth, bears down on the Proctors. Draped in sanctimony and absolute certainty, this is a judge from your worst nightmare.

At over three hours with intermission, The Crucible is no lighthearted romp. But the second-act trial puts any TV courtroom drama to shame. Innocent people writhe on the spiny point of mass hysteria as a mindless spasm of fear swiftly devastates their lives.

And before you feel superior, recognize that this particular human frailty is no historical artifact — it is alive and functioning in our world today. Visually raw but polished in performance, this is a production that will leave slivers in your soul.