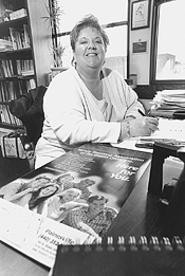 These Tarzans haven't seen a Jane in days. They grab their crotches and wag their tongues. They press hard against the glass, so it shakes, and make lewd suggestions that are sucked up by soundproofing.

The guys will take what they can get, and today, it's an eyeful of Wynn-Peaspanen's monthly sex and family planning class.

The class is for women, but thanks to a scheduling fiasco, it meets in the men's ward, right across the hall from the shower room, where the dime-store Romeos clamor to watch the women sit around, talk, and when things get really exciting, pass around a rubber breast to feel for lumps.

"They can't hear us when we talk, but it's still not real comfortable," says Wynn- Peaspanen, an outreach educator with the Lake County Family Planning Association. Once, a guy dropped his pants. And once, some of the women actually got out of hand, doing dirty dancing for the guys.

"Some of these women are prostitutes, and it's not a big deal to them," says Wynn-Peaspanen, 43, who started out as a peer counselor in college, talking about women's health and birth control in the dorms, then got a master's in community health education.

The room is one of Wynn-Peaspanen's least favorite things about her work, which involves outreach at the jail and the Lake County Juvenile Detention Center, as well as at area high schools. One of her favorite things is the people she works with -- teens and adults at high risk for unwanted pregnancies and sexually transmitted diseases.

As the women file in, Wynn-Peaspanen sets out brochures with decidedly unromantic titles like "What Is a Pap Smear?" and "Understanding PMS." She asks if anybody has PMS.

"Mmmm-hmm." A woman raises her friend's hand, and everybody laughs.

"How about menopause? Is anybody approaching that? And also, what health problems have you had?" Hysterectomies, lumpectomies, and complications with menopause.

Some inmates must attend the class, while others come because "it's something different in their boring existence," says Wynn-Peaspanen.

Two of the 10 are pregnant. One's 18, with her first on the way. Wynn-Peaspanen knows her by name, from a sex-ed class she taught at a local high school. The other's 26, expecting her sixth child. They pass around the rubber breast, but they're not feeling for lumps correctly.

"Hold it up here," instructs Wynn- Peaspanen. "Don't put it on the table, because you can't put a real breast on the table. Well, maybe if they're big enough, you can." She shows them how to position their fingers and how hard to press. At one point, a few women get a little too giddy and start noticing the dudes in the shower room.

"Turn around when you do that, so the guys out there aren't watching you," Wynn-Peaspanen says. "They're gonna get off on that. It doesn't take much."

She talks about who's at increased risk for breast and cervical cancer, and when to get a mammogram. The women ask lots of questions and try to outdo each other with horror stories about people with really bad STDs.

"They've been watching Jerry Springer, so a couple of them want to know what a hermaphrodite is," says Wynn-Peaspanen. She lets them out of class five minutes early, so they can make it downstairs in time for the show. But she'll be back next month to talk about families, not all of them nuclear. A domestic violence counselor also makes a monthly visit.

Kathy Silvi, the director of the treatment program at the jail, helped initiate the family planning visits five years ago, as part of an alcohol and drug treatment program for women inmates. They wanted to reach the women that the clinics weren't reaching.

At the juvenile detention center, Wynn-Peaspanen's class of girls is much more quiet. This week, they all have orange-tinted hair -- it looks like the peroxide bottle really made the rounds.

Gloom is in the air, so Mary reaches for her trusty icebreakers. "Let's start out by everyone telling their name and what their favorite thing is about the holidays." Some say being with family, others "giving and receiving gifts."

"Okay, today we're starting off with sexually transmitted infections -- the gifts that keep on giving," she announces, and the girls titter. They take a quiz on birth control methods and STDs, then go over the answers.

"Okay. And abstinence means what?"

Few seem to know, so Wynn-Peaspanen explains, then asks the million-dollar question: "How can people make abstinence more effective for themselves? How could people who wanted to avoid sex do that?"

"Yeah, I don't think they sell those anymore."

"Lock yourself in a room!" offers another.

"You could lock yourself in a room . . . You know, one of the first things we're going to be talking about is just making a decision that that's what you want to do and being clear with yourself that that's the choice you have made. So when you get into a situation where that becomes an issue, you know what you're gonna do."

She suggest that the girls find friends and adults who support their decision. "And then -- sort of a takeoff on locking yourself in a room -- not putting yourself in a situation where it's gonna be difficult to choose otherwise." Not being home alone with a girlfriend or boyfriend. Going on group dates.

"It's hard to tell them how to deal with peer pressure and internal pressure in a class period," she admits later. "We don't always have the time for that."

With kids at the juvenile detention center, Wynn-Peaspanen is able to talk more frankly about sex than with those at the high schools.

Some of the girls, now 9th-, 10th-, and 11th-graders, say they had sex education in 7th-grade health class. They also get advice from their parents, but it bothers them when Mom and Dad don't practice what they preach.

One girl says she got her information from books and from her mom. "But when I first had sex, I didn't know anything. I was basically -- in elementary school. I just did it, because I did, I didn't know what I was doing."

Wynn-Peaspanen doesn't address sexual abuse much, preferring to leave that to counselors. But that doesn't mean it isn't a problem, especially with girls.

As for the boys, they might act like "great Casanovas," but they often get even less sex education than the girls, says Wynn-Peaspanen. "A lot of times, they'll start having sex at a younger age, and they'll have had a lot of sexual partners, but they don't know how a woman's body works.

"I've been doing this for 14 years, and it's terrible, from what I see. No one is talking to the boys about this. They won't answer their questions."

So in a separate class, the boys also take the quizzes about menstrual cycles and birth-control methods.

"How are we supposed to know the answers to this?" demands a boy in front. "We don't take birth control!"

"Well, most of your sexual relationships are with females," says Wynn-Peaspanen.

"So it's important for you to know this."

They start out slumped in their chairs, but by the time Wynn-Peaspanen asks why it's important to leave room at the tip of the condom, everybody answers at once.

"So you can get some air in there!"

"Because it needs room to breathe, man."

That cracks up Wynn-Peaspanen. "Well, not exactly, but not leaving air at the tip is the number-one reason condoms break."

They want to know why, if AIDS is incurable, was Magic Johnson "cured" of it? Can a girl get pregnant if a guy "pulls out"? What do crabs look like, how long does AIDS take till it kills you, and do people really have sex with monkeys?

"The kids are very down-to-earth and real," says Wynn-Peaspanen. "They're just regular people who have made some bad choices or haven't handled themselves well. I've never been treated with anything but respect. I respect them, and I think they're neat kids."

Wynn-Peaspanen's outreach at the jail and juvenile center is more involved than most, says Roseanne Reames, who administers grants to family planning clinics in Northeast Ohio for the Federation for Community Planning.

"I think the thing that's most impressive is that she's very good at dealing with different types of populations," she says. "We can tell them things at a clinic, and sometimes it goes in one ear and out the other, but Mary is very good at asking, "What does this group need?'"

Back in class, a boy brags that he'll probably never practice what he's learned today, because "real life is real life, and class is school. They tell you something in class, you're gonna do the opposite."

The kid next to him mumbles something.

"Wait -- could you say again what you just said?" Wynn-Peaspanen asks. He's suddenly shy, so she repeats it.

"He said he turned a lot of girls down because he didn't have a condom."

"He must get so much that it's easy to turn it down," remarks a classmate in back.

The boy turns around. "No, I just know that, if you get a disease, it's not gonna go away, and you could give it to somebody else." Class dismissed.