Van Wilder sets aside the smirk to make something rare: A romantic comedy that feels (almost) real. 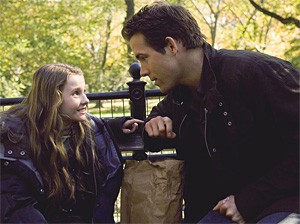 Definitely, Maybe is a surprisingly rewarding romantic comedy — one worth the effort, because some effort has actually been put into it. Imagine an old-school Woody Allen flick starring Ryan Reynolds, that shit-eating smirker from Van Wilder. This isn't exactly Annie Hall, but the mere fact that it aspires to those heights is worth celebration.

Such are the diminished expectations caused by living in a time when Kate Hudson and Matthew McConaughey just got another shot at falling in big-screen love. Ugh. Happily, this is no fool's gold, but something a little more valuable: a romantic comedy in which the love story's dinged with disappointment. The movie even dares to suggest that happy endings come to an end — something rarely acknowledged in studio flicks, especially around Valentine's Day.

Definitely, Maybe doesn't quite possess the courage of its convictions, but it also digs deeper than your average romping rom-com. The film is told almost entirely in flashback, during that long-lost decade of the 1990s. When first we meet Reynolds' Will, in 2008, he's a corner-office ad exec being served his final divorce papers. Smartly capturing the ease with which we disconnect from the outside world, he slaps on his iPod, punches up Sly & the Family Stone's "Everyday People," and struts through a silent Manhattan — a dude living his own movie, scored to his perfect song. He then picks up his daughter Maya (Abigail Breslin, of Little Miss Sunshine), who turns out to be one of those 11-year-olds in movies who sound like their 51-year-old writer-directors (Adam Brooks, in this case) when discussing things like love, sex, and relationships.

Maya wants to know how it all went wrong between her parents, and as a begrudging bedtime tale, Will lays it out for her, changing the names of the women in his life story in order to keep his daughter (and the audience) guessing Mom's identity. In Will's recounting, he encounters several women with whom he will fall in and out of love — one of whom will become his wife and Maya's mother. Only, at the end of Will's story, the parents will be divorced, and Maya will be left with what she calls "a romantic mystery" absent its fairy-tale finale.

But before the unhappy present-day, there are first the promising yesterdays: It's 1992, and Will's a collegiate Young Democrat in Wisconsin dating the old-fashioned Emily (40-Year-Old Virgin's do-it-herselfer, Elizabeth Banks). Emily refuses to move to New York, where Will's been hired to work on Bill Clinton's 1992 campaign. Working for Clinton, Will elects himself two best friends: Derek Luke's Russell, with whom Will eventually forms a political-consulting firm; and Isla Fisher's April, the freewheeling Xerox girl with the Smiths T-shirt who frowns on things like presidents and marriage. Also in New York, we meet an old friend of Emily's named Summer (Rachel Weisz), a would-be writer shacked up with a cantankerous, decrepit, robe-wearing, chain-smoking, Scotch-drinking, pop-culture-loathing author-professor brilliantly named Hampton Roth, played by Kevin Kline.

Will and these bright, beautiful women keep crossing paths — as lovers, as disappointments, as friends, as what-coulda-beens, as what-might-bes. Throughout, the movie is grounded in the up-and-down everyday — in which yesterday's love affair is today's breakup is tomorrow's regret. As romantic and sweet and silly as the film can get, ultimately it just shrugs and says, "Do your best, expect the worst, and you'll muddle through."

As for Reynolds, he manages to mute his smart-ass qualities without dulling his timing, and it's an unexpected delight to find him in something resembling a grown-up comedy. He forever seemed destined to be the dude from Two Guys, a Girl and a Pizza Place. Maybe, just maybe, he's no longer a could-have-been, but rather a might-be-after-all.