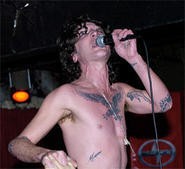 Australian grindcore label No Escape has signed a worldwide deal for the next two releases from Accept Death: the band's second album and a split CD with Dutch sludge-beasts Skullhog. Tentatively titled All Evil, the album is due midyear.

Accept Death is the most abrasive of drummer Corey Bing's six underground-metal projects, which also include Fistula, Scumchrist, and King Travolta. The Medina-Cleveland trio features guitarist Scott Stearns (also of Necrodamus, and formerly of Integrity precursor Die Hard). They're midway through recording All Evil at Chippewa's Forked Tongue Studios, with Abdullah's Jeff Shirilla, who also plays in Fistula.

No Escape partner Christoph W says he checked out the band because it features drummer Matt Rositano, also of Cleveland grindcore legends Hemdale, who he says are "gods" on the international scene. "I totally loved [Accept Death]," says W. "It was a new sound and killer in its own right, rather than a rehash of a member's old band."

England's Retribute Records released Accept Death's self-titled LP last year. The disc is the audio equivalent of the viscerally disturbing remake of The Hills Have Eyes, filled with slow, jagged riffs and samples that sound like outtakes from a torture film.

· Nighttown isn't just one of the city's coolest clubs; it's one of the nation's best, according to Downbeat magazine. The jazz bible ranked it as one of its 100 Great Jazz Clubs for the fourth year in a row. The Cleveland Heights establishment is the only Ohio club on the list.

· Singer-pianist Rob Kovacs has rejoined pop group Return of Simple. The group plays its comeback show Friday, March 16 at the Grog Shop (2755 Euclid Heights Boulevard). The set will feature the band's first new songs in nearly two years. Get a taste at MySpace.com/ReturnOfSimple.

· Chicago blues band Howard and the White Boys have recorded a cover of Colin Dussault's Blues Project's "Good Booty and BBQ," a song that's become popular in the Windy City. The Project is recording its next album, which will include covers of the Van Morrison ballad "Someone Like You" and the Yardbirds' interpretation of "I Ain't Got You."

· Cleveland hardcore legends the Spudmonsters will reunite Saturday, May 19 at Peabody's. The show will feature the lineup from 1996's Moment of Truth, including Pro-Pain guitarist Eric Klinger.

· Hip-hop group the Union will play a one-time reunion show at the Funky Frog (7865 Plains Road, Mentor) Thursday, March 15. The night will include sets by the group's Sliq Bastid and Shugabooga, who is now part of the Chop Shop Renegades.

· Readers who visited Scene's C-Notes blog this week received free tickets to an exclusive Roots show, early concert announcements, and links to an exclusive compilation of video clips for St. Patrick's Day. Check out www.CleveScene.com/blogs for a piece of the action.