After a Lake County flood, one rich developer keeps residents from moving on 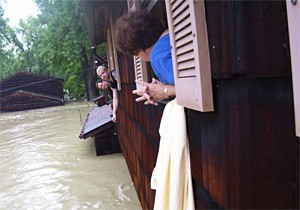 In the early hours of July 28, 2006, Ginny Hobson was in bed when she heard something tapping at her kitchen window. She swung her feet to the floor and wiped her eyes. It was hardly 5:30. Must be the cats, she thought.

It had been raining for two straight days in Painesville. In Millstone, the wood-shingled condo development where Hobson lived, the sump pumps were ready. But for people who lived within a stone's throw of the Grand River's banks, a little water in the basement was nothing new. And for green thumbs like Hobson, the damp soil was welcome: It was responsible, after all, for bringing out the purple blush in her Japanese lilacs.

In fact, in three years in her condo, Hobson had turned a backyard full of junk and medical waste into a habitat. It was her reward, she thought, for years of careful saving.

And it was all about to be washed away.

When Hobson looked out the window, she should've seen her front yard. Instead, she saw a black mass, shifting and roiling. The tap at her window hadn't come from a cat, she realized. It had come from the blunt end of a split-rail fence. The night before, the fence had been standing guard in front of her home. Now, thanks to the worst flood in the Grand River's history, it was staring at her, eye to eye, asking to be let in.

"We never thought to buy a life raft," Hobson says, sitting in the Painesville apartment she now shares with her husband.

When the Hobsons were rescued from their roof that morning, the water was up to their second floor. The Grand River crested at 17 feet that week, four feet higher than the previous record. Portions of Lake County were declared federal disaster zones. And when Millstone residents returned to their homes days later, they found them uninhabitable, covered in river muck and mildew.

While they scrambled for places to live, relief came from an unlikely source: FEMA. The agency had become a national punch line after Hurricane Katrina, but on this much smaller stage, it appeared as a savior.

At a meeting two months after the flood, Dan Nicholson, president of Millstone's homeowners' association, laid out the plan: FEMA would give the city of Painesville money to buy back Millstone's 38 units. The city would raze the development and turn it into a park. All residents had to do was agree to sell.

People streamed to the table where Nicholson sat, a Where-do-I-sign spring in their step. But one man stayed behind.

"Everybody came up, put down their ID, and signed," recalls Nicholson. "Everyone but Bob Gibbs."

It's a rainy weekday in May, two years after the flood. At Silvestro's Depot, a cozy lunch spot in Painesville, Robert Gibbs sits at the corner stool, next to the bar's busiest thoroughfare. It's the perfect spot for Gibbs to do what Millstone residents say he does best: get in the way.

Pushing 80, Gibbs is hardly shrinking into old age. A horseshoe ring of white hair and muttonchops frame loose jowls. An outfit of OshKosh and plaid flannel suggests a farmer who joins his flock at the trough, not the town's wealthiest developer. To get around Gibbs' massive frame, waitresses and customers resort to the sideways-squeeze technique. It's a maneuver born of necessity. Gibbs eats here every day.

"Go talk to that cocksucker, Hillary [Clinton]," Gibbs says, oddly, when a Scene reporter asks about his blocking of the Millstone deal. "Go talk to those fat fucks down at City Hall."

Gibbs isn't just any condo owner: He built Millstone back in the early '70s. After years of renting them, he started selling the units in 1998. By 2002, he'd unloaded all but two. But Millstone's condo owners were hardly done dealing with Gibbs.

The first trouble came when they tried to wrestle away control of their property. Millstone's new homeowners' association asked Gibbs for the books — records of the fees he'd collected after he first started selling off the condos. After stalling for two years, Gibbs finally turned them over, court records show. But right before ownership changed hands, Gibbs wrote himself a check for $50,000, leaving the homeowners with virtually nothing. They sued, but Gibbs hadn't broken any laws. A judge tossed the suit.

In 2005, Millstone and Gibbs were in court again, this time over the ownership of a storage shed. It was a trivial matter, the kind that most in Millstone thought could be settled without the courts. But Gibbs fought it. The lawsuit lingered until it was washed away by the flood.

Gibbs and his wife, Evelyn — the president of 270 Main St., their development company — have been on both ends of more than 50 lawsuits in Lake County. For a busy developer, that's no surprise. But Gibbs appears to excel at turning small matters into never-ending legal battles.

His most famous came in 1994, when he was cited by Concord Township for building a deck too close to a neighbor's property. Gibbs took Concord to court, demanding years of zoning records. To compensate for Gibbs' massive request, Concord instituted a two-cent raise in the cost of copies. So he sued them. Finally, in 2006, after hundreds of motions and thousands of documents, Gibbs exhausted his appeals. He fixed the deck. It took only 12 years.

But never has his foot-dragging taken the toll it will in Painesville. After everyone but Gibbs agreed to the FEMA buyout, city officials began the long process of finishing the truckload of paperwork. By March of this year, it was done. Almost two years after Ginny Hobson heard the tap at her window, Millstone owners would finally be able to cash their checks and move on.

But FEMA would buy the properties only if everyone agreed to sell. Not only was Gibbs not selling; he wasn't telling anyone why, residents say. When asked by Scene, he presents a blustery front of profanity-laced sturm und drang, claiming he knows nothing of the buyout.

"I don't talk spic," he says. "But I do understand English, and I hear well. When someone shows me something definitive, you'll be the first to know." He won't say anything more.

More likely, they say, it's revenge for taking him to court. "It's about power. It's about control," says Millstone board member Crystal Forbes. "He's screwing a lot of people because he's a jerk."

Adds Nicholson: "He's got 37 families he's puttin' the screws to, in order to get his point across."

To circumvent Gibbs, the city asked a judge to let the deal go through without Gibbs' signature. But Russ Schaedlich, Painesville's city planner, says that even if that works, Millstone residents probably won't see their checks for another year — too long a wait for people like the Hobsons.

Light streams in their third-floor apartment, unabated by window dressings. No sense in buying drapes when you don't know how long you'll stay. Ginny and husband Jerry like their new place, but it's nothing compared to what they had in Millstone.

"Even though that schmuck built it," says Ginny, "we loved it."

Although Millstone has been stripped and gutted, the Hobsons continue to pay their $600 mortgage. It's not easy, given their salaries — both work as security guards at a local plant — but even less manageable is what they'll deal with come June. That's when FEMA's rent assistance dries up, and they'll be forced to find another $700 to cover rent.

Still, they're hopeful one man's stubbornness won't keep them from someplace to call home. Ginny points to a bouquet of sunflowers Jerry got her for Mother's Day.

Someplace with a garden, perhaps.