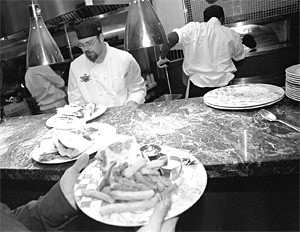 It was 2002 when entrepreneur Nick Kostis took that defining leap of faith and flung wide the doors to Pickwick & Frolic, his $5 million entertainment complex on then-shabby East Fourth Street.

But as anyone who has lately ventured down today's bustling sidewalks can tell you, his moxie clearly paid off. In fact, with Pickwick & Frolic as its anchor, the street has blossomed into downtown's premier destination, home to such major attractions as Lola Bistro, the Corner Alley, and House of Blues.

By all appearances, Pickwick & Frolic is also thriving, pulling in crowds for the Tuesday-through-Sunday comedy shows at Hilarities, attracting hipsters for drinks at Kevin's Martini Bar, and drawing in both downtowners and day-trippers for meals in the handsomely appointed dining room.

If that doesn't earn the man and his team some major props, I'll gladly eat my gin-soaked napkin.

But here's the thing: Despite Kostis' undeniable savvy and the growing sophistication of the region's dining scene, Pickwick & Frolic remains no more than a second-tier restaurant, with unpolished service and food that only occasionally hits the mark.

"More fizzle than sizzle" — that's how I put it when I reviewed the spot soon after it opened, and it holds just as true today. It also may explain why, when I invited a trendy young colleague to join me there for dinner, she momentarily went blank.

"Huh," she finally replied. "I guess I knew they had a restaurant, but I've never considered eating there."

Unfortunately, nothing about our visit seems likely to alter that sentiment.

If there is an overarching theme to the "American rustic cuisine," it's the employment of either the signature stone oven or the wood-fired rotisserie grills for dishes ranging from lasagna to prime rib. If nothing else, they make the dining room smell fabulous.

That's probably what convinced us to start with a platter of stone-oven-baked flatbread and an assortment of spreads. Plump, tender, and sliced into broad fingers, the warm bread offered loads of toasty comfort. Far less appealing, though, were the not-so-savory spreads: bland hummus, oily aïoli, an indistinct artichoke spread, and even the tapenade, which, while pleasantly salty, lacked the desirable olive-y zing. Only the soupy-but-bright tomato relish budged the Flav-o-meter.

Then there was the salad snafu. Initially, my gal pal and I asked to share a baby-spinach salad as a prelude to our main events, but at our server's suggestion, we simply "upgraded" our standard house salads (included with most entrées) to the spinach version. It seemed like a good deal: In exchange for the $2.95 surcharge, we got an impeccable toss of baby spinach, marinated mushrooms, kalamata olives, feta cheese, and sun-dried tomatoes. But the salads seemed a little dry, as if the kitchen had forgotten to dress them — a suggestion our server forcefully denied. And we thought the menu said something about candied pecans, but there were certainly none here.

Still, all was well — at least until kitchen runners arrived with two enormous meal-size versions of the same bowl o' greens.

"Not our order," we insisted, shooing them away. But the runners remained unconvinced. Finally, they agreed to remove one of the salads, but simply walked away from the other. And that's how we confirmed our earlier suspicions: The full-size salad included both a tub of balsamic dressing and a plantation's worth of candied pecans.

That bonus salad became a godsend when my friend's cod proved inedible, from its fiercely sour, cruelly salty, unidentifiable topping — preserved lemon? yellow peppers? green tomatoes? — to the greasy, fishy-tasting rice below. Then there was the frozen filet: watery yet somehow dry, and full of needlelike bones.

Far better was my thick, tender, double-boned pork chop, done to a juicy turn on the wood-fired grill. But the following week, a lunch visit returned us to Weirdsville, beginning with a server who warned us not to order the soup du jour (a boon for us, maybe, but a black mark on the kitchen), and ending with the s'mores, featuring a good-quality chocolate ganache topped with toasty, miniature marshmallows, inside a crust that duplicated the taste, texture, and appearance of wet cardboard.

"So sure, head over to Pickwick & Frolic for a Hilarities show, throw back a chi-chi martini, and revel in the magic on East Fourth Street. The glow of excitement here is real. But until it eventually finds its way into the kitchen, you may want to make your dinner reservations elsewhere."

And don't hold your breath.