After years of going head-to-head, Scene and Free Times will become one 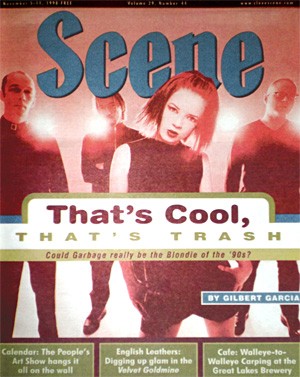 It's bound to happen: One day, after a long afternoon of plundering your money, Jimmy Dimora is going to eat Cleveland. He'll wake in the middle of the night, check his fridge, and realize that he finished off the rib roast the last time he got up. So he'll douse some salt on Terminal Tower, smother Slavic Village in hot sauce, and gorge himself, washing it all down with a tall glass of Cuyahoga.

The question is: Who will be around to cover it?

Perhaps more than ever, Cleveland is in dire need of stable opposition forces, boots on the ground in the two-front war against Incompetence and Really Brazen Incompetence. From Dimora's bacon-wrapped bumbling to Frank Jackson's vaunted Beard of Silence, the dearth of perceptible leadership around here can make your local Arby's seem like a Yale class reunion.

But those forces — the notebook-wielding dweebs who report these things so we can shrug and say, "That's our Jimmy!" — are dwindling. The Plain Dealer is cutting pages, and layoffs aren't far behind. The local TV stations are struggling to maintain their long tradition of mediocrity. And the town's two alternative weeklies will soon become one.

Perhaps you never noticed, but you've been lining your cat's litter box with two separate papers all these years: Scene and the Free Times. We each fancied ourselves different and superior, choosing to believe you loved us and only us. There was a time, in fact, when we fought valiantly for your affection.

The battle peaked in 2003, when David Eden, then the Free Times' editor, found himself in the shadow of Scene editor Pete Kotz. The two had been trading blustery blows of ink for some time. Kotz recommended they make the combat more interactive.

At 6 foot 4, Kotz is like a grizzly bear, if grizzlies chain-smoked and wore Deadliest Catch T-shirts. So Eden wisely suggested that they settle their score in "the marketplace of ideas." But Kotz had been to that market once, and was disappointed they weren't showing the Red Wings game.

"I didn't feel like writing about it," he told the PD after Eden ducked him. "I just wanted to kick his ass."

It's been only five years since then, but that period — a stretch when the Free Times and Scene were so wholly committed to beating each other, they harbored oddly detailed fantasies of actually beating each other — seems like forever ago. In recent years, both papers have been shrinking, cutting pages and forcing homeless guys to use the Auto Trader for warmth. We've gone from whaling middleweights — even we were never drunk enough to consider ourselves heavyweights — to malnourished lightweights, sweating and panting and leaning on each other, wondering when the bell would finally ring.

It sometimes seemed like it would never end. But last week, a company called Times-Shamrock arrived in Cleveland to announce they'd stopped the fight. The Scranton-based, family-owned company — which runs dailies in Pennsylvania and alt-weeklies in Detroit, Baltimore, and other cities — recently bought both Scene (from Phoenix-based Village Voice Media) and the Free Times (from Times Publishing Co. in Erie). After publishing three more issues side by side — this is the first of those three — Times-Shamrock will merge the papers under Scene's name. Matt Fabyan, the publisher and part owner of the Free Times, will run the new paper. The Free Times' Frank Lewis will be the editor.

The idea, of course, is that with no competition to siphon off advertisers or keep ad prices rock-bottom, one alt-weekly might accomplish what the Free Times and Scene couldn't: make enough money to survive. And it's hard to bemoan the consolidation. Had they not become one, the two papers would have eventually become none.

But, at least for now, Cleveland — like plenty of other cities — will lose some journalists. At the time of the sale, the two papers employed a total of about 25 people in their editorial departments. It's unclear how big the new staff will be, but starting with the July 23 issue, that number will be much smaller. Expect increased bloviating in the unemployment line and a sudden upsurge of new blogs.

At Scene, there already have been casualties. Lisa Rab, the Alfonso Soriano of local journalism, has packed up her 40-ounce bat and gone in search of new public officials worthy of kneecapping. Elaine Cicora — Scene's award-winning food critic, who last year won a coveted James Beard award — saw the merger as an opportunity to try something new. After 10 years of eating out for a living, she summed up her departure with her best line yet: "I'm full."

There will be more departures, but none more noticeable than Kotz's. He started this week as the editor of Nashville's alt-weekly, another Village Voice paper.

In his eight-plus years here, Kotz manned a ship that netted hundreds of awards — national and statewide honors for everything from photography to investigative reporting. Kotz himself was named the Best Columnist in Ohio several times, including this year and last. And in 2005, he broke the story of the FBI's investigation of former mayor Mike White — a story the PD had been sitting on and was forced to chase in the hours after Scene's story hit newsstands. Kotz also mentored countless writers — young, hungry scribes who went on to become award-winning columnists and top editors, and who can, thanks to their old boss, hold their whiskey like Gary Busey holds his crazy.

It's unknown who will fill Kotz's paint-and-Jameson-stained boots. The folks from Times-Shamrock are, as you read this, trying to assemble a new staff from the offices of both papers. They're also trying to figure out what readers want from each rag — trying to combine "the best of both worlds."

It's a task that, five years ago, would have required riot gear and plenty of sedatives. But these days, everyone's just hoping to have a job at the end. If that job happens to involve busting Jimmy's pork chops, we'll consider it a bonus.