After years of lying low, the Breeders make a lo-fi return 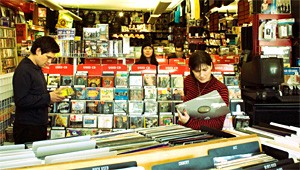 It's not like the Breeders have been sitting around doing nothing, says Kelley Deal, explaining the six-year gap between the band's last album, Title TK, and its new one, Mountain Battles. Likewise, she says, the nine-year lull between the group's breakout CD, Last Splash, and Title TK wasn't exactly a vacation.

For one thing, Kelley's twin sister, Kim, reunited with her old band, the Pixies, for a 2004 tour that had indie-rock hipsters pining for tickets like Indiana Jones did for that gold idol. Kim also both formed the Amps and made an album with them during that downtime in the '90s. Kelley, meanwhile, fronted the Kelley Deal 6000, which released two CDs. Besides, she had to cope with that incident — the time in '95 when she had a package of heroin delivered (via U.S. mail!) to her Dayton home.

"We never really stopped working," says Kelley. "It's not like we just got back together. Life was happening. It just takes time to [put together] 40 minutes of good music."

So now the Breeders are back with Mountain Battles, a sometimes puzzling and occasionally languid work that starts with a blast ("Overglazed"), winds its way through a pair of cloudy lullabies ("Night of Joy," "Here No More"), works it off with "Walk It Off," and pumps up the volume in "It's the Love." Many tracks collapse before they gain momentum; others are buried in layers of sound, piled on by a number of different producers. "We tried songs with banjos and violins, and in 4/4 time rather than 3/4 time," says Deal. "We have all kinds of versions of these songs."

Back in 1993, when the Pixies broke up, good money was on Black Francis to have the stellar solo career. He was the guy behind some of the band's best songs and the sweaty, balding dude in front of all the noise. Bassist Kim Deal, who had already released a couple of records with the Breeders, was pretty much expected to make a marginal indie-rock album every few years that a hundred or so fans would hear.But then Nirvana, stirred by the Pixies and, in a delicious twist of gratitude, launched an alt-rock revolution. Suddenly, every long-haired, drug-addled guitar player with a fuzzbox snagged a record contract. Black Francis (now going by the switcheroo moniker Frank Black) got brainy and weird when music fans wanted simple and loud. Kim Deal got loud.

The Breeders' 1993 CD, Last Splash, turned out to be a modern-rock landmark — a howling, hazy approximation of life inside a buzz saw. Anchored by "Cannonball," which netted tons of airplay, the album made listeners forget that Deal was even in the Pixies. But by the time they regrouped for 2002's Title TK, that record's dismal grooves and disjointed textures really didn't seem to fit anymore.

Mountain Battles puts the pieces back together — sort of.

"It all just came out," says Kelley. "How do you know what a record is going to be before you start it? It's like painting a picture: 'I'm going to paint a picture of this.' I don't think it will look like that when you're finished. But I hope the new songs sound effortless. They're not. But we hope it sounds like Kim picked up an acoustic guitar, put some chords together, and here's what they sound like."

Speaking of things not being what they seem, remember those scenes in LoudQuietLoud: A Film About the Pixies that implied that Kim was this close to falling off the wagon during that legendary group's reunion tour? Not true, says Kelley, who tagged along just so her sister would have someone to hang out with between gigs. "Joe, Charles, and David are guys," she says. "They're not fun to tour with. They're super-sweet guys, but me and Kim would go to yarn stores or visit museums and botanical gardens together. That's more fun to do with girls.

"The movie put a spin on Kim just hanging by a thread," she continues. "They just needed a storyline. She was sober for more than a year [at that point]. But they got into this reality-TV vibe. The Pixies are boring [offstage], so they made stuff up."

The Deals have, in fact, endured mountain-sized battles with drugs (Kelley) and alcohol (Kim) over the years. But they are sober now. "It was never about having a beer — it was about having a whole case," says Kelley. "Neither of us want that anymore."

At the risk of sparking an idea for a Lifetime movie, it seems that the Deals have a sort of support-group-for-two thing going. "We're sisters, so of course there's some sibling rivalry," says Kelley, who was born 11 minutes before her sister, 46 years ago in Dayton. "But we're older, so it's not like we're vying for our parents' attention. We do love each other, and we're proud of each other. It works out really well."Whatever is fueling them — sobriety, random bursts of creativity, working together again — it seems to have inspired the sisters. A four-piece version of the Breeders is now on the road for the first time in years, and Kelley says the group is already working on new songs for their next album. Maybe it won't be another six years between records this time. Then again, Deal says they have all the time they need.

"We never based the Breeders on wearing a bustier and chunky gold earrings with our hair up, and high-kick dancing," she laughs. "I'm wearing the exact same shit I wore back when we started. We're playing rock music. If you like all that, then you'll keep coming to our shows."