With Municipal Waste, the Hoods, and Pledge of Resistance. Thursday, July 19, at the Agora. 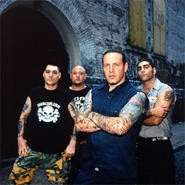 New York hardcore existed before Agnostic Front, and some of it kicked ass. But the group set the bar for the scene.

"It's got elements of our whole career," says Miret, taking a call in Zeuss' New England studio. Tattooed to the gills, Miret is a true blue-collar punk. He even manages the group's tours.

Warriors is slated for a 2007 release. Until then, Agnostic Front's gigs will spotlight the band's classics, much like the live set heard on the Working Class Heroes LP. In addition to "Victim in Pain" and "Still Here," the group pours a triple shot from 1986's Cause for Alarm: "The Eliminator," "Public Assistance," and "Toxic Shock."

Unlike most veteran bands in any genre, Agnostic Front never abandoned its early material. The band's live shows still deliver old-school hardcore. This allows Agnostic Front to maintain a loyal fan base while dipping into straight-up punk, Oi!, and double-kick metalcore. Although most of the group's records sound different, no band better proves that hardcore is as hardcore does.