by P.F. Wilson and Cris Glaser 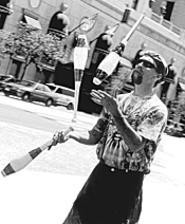 After eight years in Colorado's ski country, John Flower brought back to Cleveland the ability to toss weighted beanbags in the air and ski simultaneously. A couple of juggling joggers gave him the idea. "I thought if they could joggle -- jog and juggle -- I could certainly skiggle," he says. "That's why I call myself the Mad Mountain Juggler."

Flower won't need a ski slope to prove his point at his performance this weekend, which is part of the Street Beats series. All he requires is a paved sidewalk and room to interact with the audience. "I'm interested in sharing the standard stuff you normally see -- like balls, rings, and clubs," says Flower. "But I also juggle expanding and collapsing spheres. And torches."

With a fire extinguisher ready, Flower will also sell "operating manuals" that teach novices how to juggle. "Across the board, juggling has been identified with the circus arts, where we usually encounter it," says Flower. "So there is a very fluffy side to juggling. But it's fun, and it's something to watch." Watch Flower's free performance from 7 to 9 p.m. Saturday on East 4th Street, between Prospect and Euclid avenues. For more info, visit www.cleveland.com/sparx. -- Cris Glaser

Barry Diamond makes his living as a stand-up comic, actor, and singer, but his dream job has nothing to do with being onstage. "I prefer valet parking," jokes the Los Angeles-based performer. "It's no pressure, you get to drive different cars, people tip you if they like you, and you get to steal stuff." Diamond came up in the same late-'70s/early-'80s comedy-club scene that spawned Larry David, Jerry Seinfeld, and Robin Williams. And like many of those guys, he went west when a sitcom was offered. Nothing ever came of the deal, but Diamond stayed anyway, picking up movie roles (Bachelor Party, House Party), TV spots (Seinfeld, Friends), and even the occasional singing gig. "I like to open and close [my shows] with a song," he says. Prepare for music and shtick when Diamond plays the Improv (2000 Sycamore Street) through Sunday. Show times are 8 p.m. Thursday and Sunday and 8 and 10:15 p.m. Friday and Saturday. Tickets are $13 to $16; call 216-696-4677. -- P.F. Wilson

The first half of the Public Squares' latest show, Ow! You Hurt My Man Feelings!, relies on the audience, which yells out improvised sketch ideas. "Whatever they suggest is what's going to happen," says producer Adrian Byerly. After intermission, the 10-member comedy troupe launches into a dozen short sketches, including one that parodies Desperate Housewives. Between skits, they drop in a few blink-and-you'll-miss "blackouts." "They're very quick, to-the-point, one-liner jokes," explains Byerly. "They're like a little cherry on the cupcake and a sprinkle on your mocha." Show time is 8 p.m. Saturday at the Croatian Tavern, 3244 St. Clair Avenue. Tickets are $8, 7 in advance, available by calling 216-849-4089. -- Cris Glaser

After they knock off work on Tie It On Tuesdays, Brian Lambeau and his pool-playing pals cash in on five hours' worth of free billiards -- if they wear ties with their polo shirts and jeans. "I paid $37.91 for this tie," says Lambeau about his black-red-and-white Raffaello designer cravat. "I gotta make it back some way." Tie it on from 4 to 9 p.m. at Jillian's, 1148 Main Avenue in the Flats. Admission is free; call 216-575-0300. -- Cris Glaser