Minus their fallen frontman, the Seattle grungemasters reunite. 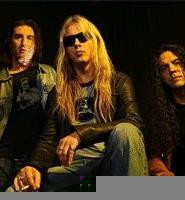 On the evening of April 20, 2002, three members of Alice in Chains -- singer-guitarist Jerry Cantrell, drummer Sean Kinney, and bassist Mike Inez -- walked toward the International Fountain in Seattle. There, with the Space Needle towering overhead, hundreds of people were assembled in the chill air, bearing flowers, notes, and candles. The previous day, the quartet's fourth member, singer Layne Staley, had been found dead in his condo just a few miles away. To the surprise of few -- in light of Staley's lengthy and well-documented battle with drugs -- the medical examiner's office later determined the 34-year-old frontman had overdosed on a combination of heroin and cocaine.

Though the band had been on hiatus for a number of years due to Staley's declining health, the surviving members had held out hope that the singer might overcome his addictions. But on that night, the story appeared to be finished.

Not quite, as it turns out.

At the beginning of last year, Kinney contacted Cantrell and Inez about doing a benefit show in Seattle to aid victims of the 2004 Asian tsunami. In February of 2005, the band took the stage for the first time since 1996, playing more than a dozen songs at a small club with vocal assistance from Tool's Maynard James Keenan, Heart's Ann Wilson, Puddle of Mudd's Wes Scantlin, and Damageplan's Pat Lachman. And this past March, Alice in Chains appeared on VH1's Decades Rock Live tribute to Heart, whose members are fellow Seattle rockers and good friends; the group played a handful of songs with the help of singers Phil Anselmo (ex-Pantera) and William DuVall (Comes With the Fall). Following that, Alice in Chains embarked on a brief spring tour, with DuVall handling vocals and ex-Guns N' Roses bassist Duff McKagan on second guitar. Now the band's in the middle of a full-scale world tour, playing as a quartet fronted by DuVall.

"We thought, 'Let's just go play a little bit,'" Cantrell says. "And I've been really surprised that the support has been tremendous."

Before any of this could happen, however, the band felt it was crucial to get in touch with Staley's mother, Nancy McCallum, to see how she felt about Alice in Chains pushing forward without Layne. McCallum -- who established the nonprofit Layne Staley Fund in 2003 to assist the Seattle music community in heroin recovery -- had mixed feelings about the reunion, but ultimately gave it her blessing.

"I believe the band has been more than appropriate, and I think that's because there are deep, deep emotions attached to 'What do we do next?'" she says in her first public conversation about the reunion. "I can't imagine that the band has moved in any direction without including a thought about Layne and what he would have thought."

From all accounts, Alice in Chains' performances on this nearly sold-out tour have been fantastic; footage posted online bears that out. The band, which in its heyday established a unique midpoint between polished Sunset Strip metal and raw, dark Pacific Northwest grunge, sounds tight and fierce. DuVall, a potent singer, is able to hit all the right notes and convey the spirit of the songs, and the fans in attendance are eating it up.

Still, you don't have to dig around the web too deep to find other AIC fans expressing dismay, even anger, at the reunion: "It's not Alice in Chains without Layne!" "How can they even use the name Alice in Chains?" "They're just doing it for the money." For some, the band's motives and sincerity become even more questionable in the context of the debacle that was Rock Star: INXS, or such dubiously regarded recent tours as the Paul Rodgers-fronted Queen or the Doors featuring Ian Astbury.

"It's totally a case-by-case kinda thing, these kinds of reunions," offers Barrett Martin, the former drummer of the Screaming Trees and the Staley-fronted Mad Season. "I've known those guys for 15 years now, and they're real solid. They're real sincere."

Heart's Nancy Wilson agrees. "I think people [fans] get a little too indulgent with their feelings of ownership about what they think bands should do or not do, but they're not in the band. It's up to the band, and those guys in particular are extremely aware of all that stuff."

Long wary of the media and reticent about doing interviews -- mainly due to the way Staley's drug problems were handled by the press -- both Cantrell and Kinney have been willing to speak out lately and defend themselves against some of the criticism that's been hurled their way.

"What is this 'You can't replace Layne'? We're not replacing. We're playing our songs, man," Kinney says.

"Who's somebody else, to tell us we can't be with somebody?" says Cantrell. "You get divorced and what -- you can't be with anybody else? Somebody dies in your family, you can't continue to live on?"

While Alice in Chains hasn't named DuVall its permanent lead singer, longtime AIC producer Toby Wright says that there are plans for a new album, adding that the band hasn't yet written any new material. For now, AIC's sets consist of songs familiar to fans, and the band stresses that the shows are a celebration of its entire catalog and of Layne's powerful legacy.

Perhaps the best representation of the band as it exists now is the image of the three-legged dog that appears on the cover of its last studio album, 1995's Alice in Chains: Sadly, a limb is missing, but life goes on.