In Spirited Away, Hayao Miyazaki soars through the looking glass. 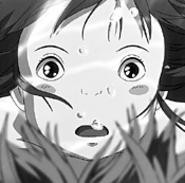 I might as well just come out and say it: Spirited Away is the best movie I've seen all year. Though it would be a masterpiece in any language, Hayao Miyazaki's animated spectacular (and Japan's highest-grossing film ever) is being released by Disney simultaneously in two versions -- one in the original Japanese, with subtitles, and another in a painstakingly dubbed translation, supervised by Toy Story director John Lasseter, with the English dialogue matched to character mouth movements. If you have kids, take them to the dubbed version; if not, support the original so that Disney (and with luck, their subsidiary, Miramax) will do this sort of thing more often. This review is based on the Disney dub (which opens this week at the Cinematheque), though approximately two minutes of the subtitled version were shown at the press screening for comparison.

It feels downright embarrassing to gush this much, especially since mainstream critics seem to throw the word masterpiece out there anytime a major celebrity appears in anything. But it must be said, here and now, that Spirited Away has a magic and imagination that we've generally seen only in the greatest children's literature. Think Carlo Collodi's Pinocchio, L. Frank Baum's original Oz books, Michael Ende's The Neverending Story, or Lewis Carroll's Alice adventures (Miyazaki's most obvious influence, in this instance); those who read the books first as children know how pale the movie versions, however great by cinematic standards, look in comparison. No doubt Japanese audiences will notice further influences, and we can even pick out a few Western ones in addition to Alice: Maurice Sendak-inspired wild things, the dolly-counterzoom shot from Vertigo, and twin witches with hair buns who bring to mind Dear Abby and Ann Landers. But much as George Lucas borrowed extensively from other sources (Kurosawa, Leone, and any number of World War II and hot-rod movies) to create an all-encompassing new fantasy universe, so, too, does Miyazaki, though it's not one you can imagine Hollywood producing.

The big studios came close to this level of imagination recently with Henry Selick's Monkeybone, but couldn't leave well enough alone, producing a final film that looked like a trailer for the better movie Selick really wanted to make. Some idiot in a suit would probably scream that Spirited Away doesn't clearly delineate between good and evil (moral ambiguity -- what a concept!), or that some of the imagery is too weird, or that two hours is too long for a kids' cartoon, especially one that strays from the traditional formula. It is perhaps a commercial risk -- especially when animated movies like Shrek and Lilo & Stitch are deemed innovative on these shores, merely for adding a little bad attitude into the mix -- to release a movie about a 10-year-old girl who walks through a tunnel into a magical realm where her parents are turned into pigs, animate balls of soot devour what looks like Lucky Charms cereal, roasted newt is the bribe of choice, and an elephantine radish pays handsomely for an herbal bath (and that's just a taste). But it's a risk that pays handsome dividends to the audience.

Now, you probably want to know what the movie's actually about, but be forewarned that part of the joy of the film is that anything can happen, and the story's many surprises are part of its beauty. If you've already decided to see this film, read no further; just go. But if you need to know more, there's plenty to tell.

Ten-year-old Chihiro (Lilo's Daveigh Chase) is on her way to a new home with her parents when Dad (The Shield's Michael Chiklis, playing against type) takes a wrong turn and winds up at the mouth of a big, mysterious tunnel. Strangely drawn to explore, the parents drag Chihiro reluctantly along and come out the other side at an empty-looking town in a vast meadow ("I knew it!" says Dad. "It's an abandoned theme park!"). Chihiro's more creeped out than awed, but her parents suddenly become hungry and follow their noses to an abandoned buffet table loaded with fantastic eats. But as the sun rapidly begins to set without warning, and ghostly shapes start appearing in the streets, Chihiro finds her parents transforming into swine and her own body fading to transparency. From there, she learns that the town is actually a sort of health spa for errant gods and spirits, and she is catapulted into a series of fantastic escapades en route to recovering her parents in their original forms.

Like Carroll's England, Miyazaki's Japan is a place of rigid class structures and an attitude toward children that they ideally should be seen and not heard. That's reflected in the story, as numerous "adult" characters berate Chihiro as rude and thoughtless. Miyazaki, like Carroll, clearly doesn't share that view, and ultimately the courage and open-mindedness of the child is shown to be clearly superior to that of set-in-their-ways elders. It's a measure of Chihiro's character, for instance, that when she looks out the window and sees a scary black-hooded figure in a Kabuki mask, her first reaction is to invite it in out of the rain.

It's also a measure of the movie that it can relate to kids without pandering to them or their parents, casually throwing weirdness our way without needing to explain it all, or leaving us feeling any need for explanation. American moviegoers who felt let down by the hype surrounding the Miramax dub of Miyazaki's more traditional Princess Mononoke should give him another shot. Unlike that film, Spirited Away is probably like nothing you've ever seen before. In a cool world, it would be guaranteed not only the Best Animated Feature Oscar, but Best Picture as well.