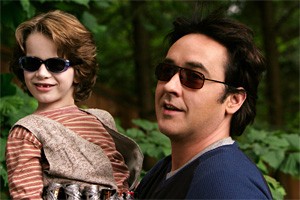 John Cusack, who more or less began his career sneaking a peek at Molly Ringwald's panties in Sixteen Candles, has finally become an onscreen daddy. Except he's not exactly the most fortunate family man on film: In Martian Child, he plays a widower who adopts an abused child with an alien complex (the kid thinks he's from Mars); in this summer's 1408, Cusack portrayed a travel writer estranged from his wife and haunted by the ghost of his dead daughter – not exactly the stuff covered in What to Expect When You're Expecting.

In the movies, it turns out, parenting isn't all it's cracked up to be. Martian Child certainly isn't much fun. There's never any question about whether Dennis (Bobby Coleman) is actually a Martian, but the kid sports sunglasses, lest the sunlight melt his eyeballs; wears a belt made of batteries; and spends his time conducting field research (taking Polaroids) before the aliens return to spirit him back to Mars.

All Dennis needs is a home to phone. And that's provided by Cusack's David Gordon, a writer of sci-fi blockbusters who believes his own experiences as a boyhood outsider will allow him to heal the wounded child living under his roof. Those who know better somehow allow David and Dennis to go along with it: the woman in charge of the adoption agency (Sophie Okonedo), the case worker who visits during Dennis' one violent outburst (Richard Schiff), the sister who can't handle her own perfectly normal sons (Joan Cusack, shocking), the friend who'd clearly like to be more (Amanda Peet), and the agent begging David for the novel he's yet to deliver (Oliver Platt).

The movie feels absolutely phony, predictable, and pedestrian, as did much of the book upon which the movie's based: In 2002, award-winning sci-fi writer David Gerrold published a sorta-autobiographical novel, in which he recounts his own struggles with a similarly disturbed eight-year-old boy named Dennis. If the novel felt gutted, the movie's downright gutless: Gerrold's gay, and at least the novel dealt with that aspect of his life.

Of course, few know Martian's origins or care that it's been sanitized. All they'll want to know is whether it's a time-killing tear-jerker. And it kind of is, though Cusack and Coleman feel as if they're in two separate movies — Cusack in the one about the single dad trying to get his shit together, Coleman in the one about the strange little boy who steals things and hangs upside down. Theirs is less a connection than a forced living arrangement brokered by agents and studio bosses.