All Singing! All Dancing! All Eating!

Carousel Dinner Theatre is the one place where you can have your show and eat it, too. 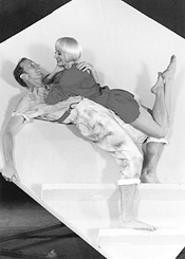 Denizens of Northeast Ohio may appreciate their teams, exalt their Rock Hall, and praise their orchestra, yet they do not count all their blessings. On the outskirts of Akron is Carousel Dinner Theatre, as proudly proclaimed on the program: "America's Largest Professional Dinner Theater."

When Linda Loman declared, "Attention must be paid," she may not have been referring to dinner theater specifically, but the sentiment holds. Here we have the ultimate marriage of stardust and capitalism. In what looks like a Las Vegas airplane hangar in every possible shade of red, camp and family values dance a merry roundelay. In the lounge, a pianist does his nightly tribute to Liberace. Perpetually smiling servers explain the nuances of the New Rhythm Boys Stuffed Shell Trio to couples dining with their beautiful children. And pink-cheeked church ladies fraternize with cut-up Kiwanis types.

On stage, a tuxedoed emcee, who bears a striking resemblance to Jim Nabors, announces silver anniversaries, octogenarian birthdays, and the presence of triumphant bowling leagues and garden clubs. Everyone seems to be in a frolicsome state of mind, ready to kick up their heels, cognizant that they are participating in a slice of vanishing America. Dinner theater is the glamorous first cousin to the drive-in movie, the family diner, the malted milk, and that long-cherished institution, the tent theater. Here, where capitalism wears a pair of tap shoes, the emcee, in his best Harold Hill patter, tantalizes the audience. With a description of the Lone Star Hangar, he touts a specially designed ice cream dessert concocted to accompany the present production, My One and Only — which is ideal, since the musical is fashioned out of old Gershwin standards and is itself an exquisite dessert.

The pastiche musical is a familiar swindle in an age bereft of true tunesmiths. Musical gems from old shows are shoved into new settings. The majority of these play like hackneyed hit parades. My One and Only, originally produced in 1983, with Tommy Tune and a surprisingly luminous Twiggy, is the exception.

Peter Stone and Timothy S. Mayer, with the aid of numerous anonymous scribes, cobbled together an elegant Rolls-Royce of a book: equal parts Astaire and Rogers, Burns and Allen, and bits and pieces of dozens of forgotten '20s shows, all made buoyant by pure art deco helium.

Captain Billy, a bashful 1920s aviator, dreams of being the first man in history to fly nonstop to Paris (a few days before Lindbergh). As in all '20s musicals, this is to win the affection of a pert flapper, in this case Edythe Herbert, the first chorine to swim the English Channel. To win our hearts, this pert little miss reclines on a half-moon sofa wearing pink satin lounging pajamas, plaintively singing "Boy Wanted." This is the kind of theatrical charm that went out with the sheiks, shebas, and rumble seats.

Captain Billy goes to a voodoo barber and learns how to dexterously woo Edythe by cultivating a more delicate brand of tap dancing. To add that extra dash of madcap exuberance, we have a female G-Man who serenades the bad guy with "Funny Face." For an extra-joyous buzz, a trio of tuxedoed scat singers dance to the proceedings like pistons in an ocean liner engine, exuding a relentless insouciance.

With its symmetrical stylization and terpsichorean bravado, including barefoot tap in a stream, dancing starfish chorus girls, and soft-shoe romancing in the clouds, the show is an ideal streamlining of Broadway conventions of the '20s, making them palpable to modern audiences. Looking like a three-dimensional New Yorker cartoon, it luxuriously bottles its Gershwin ambrosia.

Sixteen years after its original Broadway production, the ever-resourceful Carousel has slapped together a scaled-down yet effective approximation, all bravely strung together and choreographed — sometimes haphazardly and sometimes elegantly — by ball-of-fire Director Joe Patton.

With emaciated hoofers dancing for pennies in Shubert Alley, Carousel, vanishing haven for musical performers, attracts the cr&eagraveme de la cr&eagraveme of musical talent. Though not as special as Twiggy (nobody could be), Vikki Schnurr, with her porcelain soprano and golden snap, would elicit an "ooh la la!" from any tricolored Francophile. And as the more macho variation of the old Tommy Tune role, Mark Chmiel is the missing link between the rubber-limbed boisterousness of Ray Bolger and the silken ease of Fred Astaire.

As may be expected with a company where the playbill and menu cohabit, there is great economy here. It's hard to decide which dessert we liked better — that on the plate or that on the stage.