We join the Cleveland Bar Experiment for a night, downing cheap beer and free tequila only to discover that there's always another drink on the path to visiting every bar in Cleveland

by Sam Allard and Eric Sandy

The experimenting started in May last year. It was just one Thursday night for a few pals in Ohio City. And then it became a second Thursday night. Instead of going to the same old haunts, they decided to mix it up. And then the mixing it up became the game, the experiment. Every bar in the city. No repeats allowed.

Drinking at every bar in Cleveland means drinking at some 464 bars, according to the Experiment's unofficial reports. They've been to 110 so far. They've got years to go. It's another Thursday, so they're off again.

Tonight, Scene's along for the ride...

8:43 p.m. Having emerged from an Americab minivan we stand in an anticipatory clump outside Erie Tavern near East 55th and St. Clair. Erie is a small corner bar with one of those conical spires, vaguely Motherlandish.

We number three from Scene. We are here to meet the gang, the CLEBAREXP experimentalists themselves, and here they come now tumbling out of RedKiaSUV, on which the chrome absolutely gleams, looking hale and rosy-cheeked.

Slideshow A night out with the CLE Bar Experiment 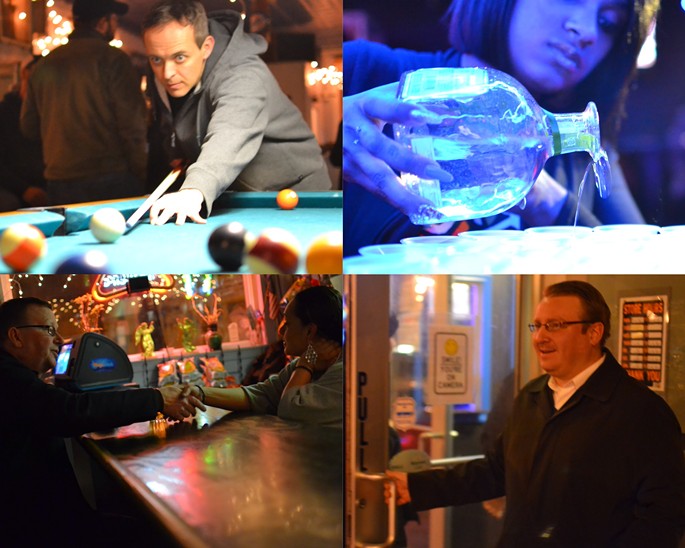 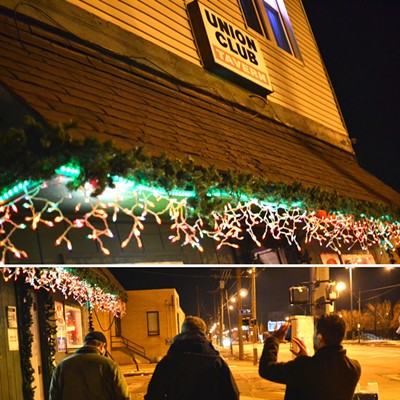 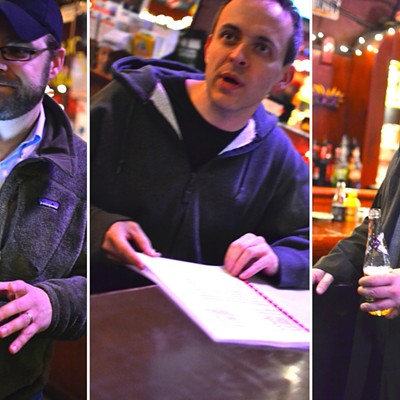 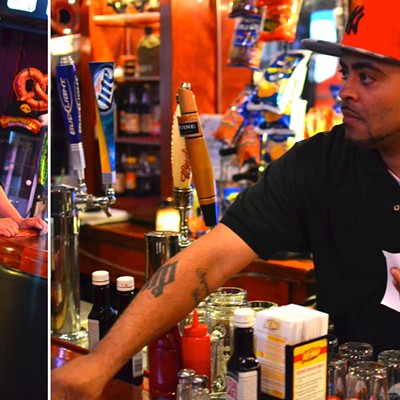 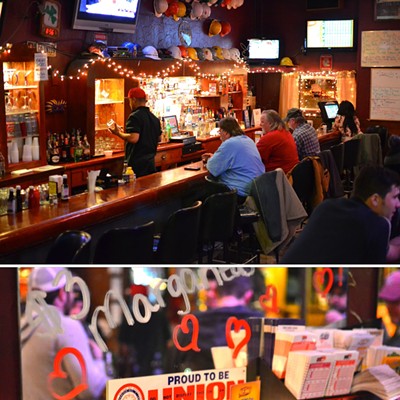 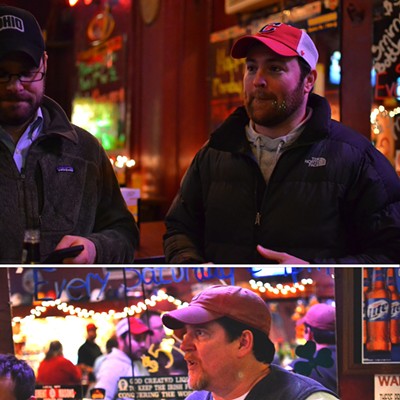 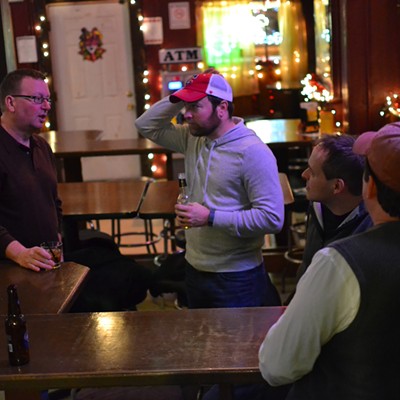 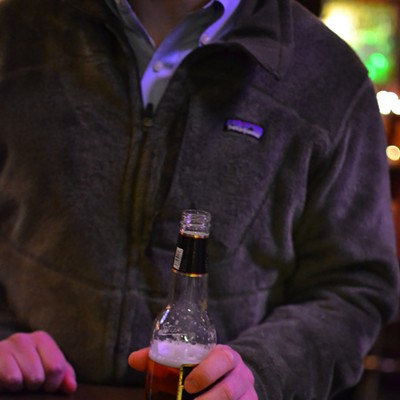 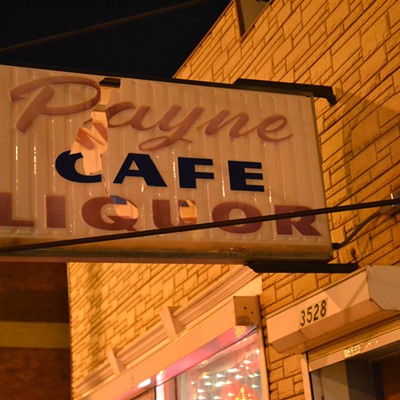 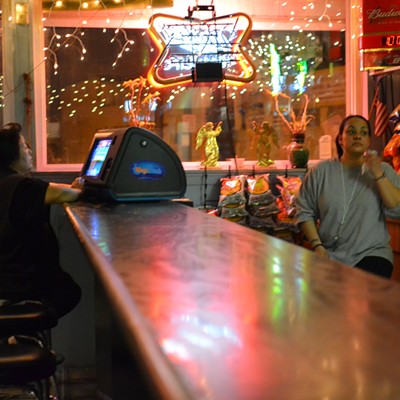 They are likewise three strong. Here is Man 1, Pat Cornely, gray sweater-vest over white turtleneck. White high-top Chucks and a faded OSU cap. He is a patent attorney and he is happy to see us. He is one of the core. Also Damon Taseff, Man 2, in OU ballcap and Patagonia jacket which looks comfy comfy comfy. Also, Joe Boyd, DD (a necessary blessing in such an endeavor), Man 3. These men are from Ohio City and do things like babysit each other's kids.

But no time for pleasantries because we are denied at first go at the Erie Tavern.

DENIED. Not once but twice. Denied! And it gets worse. Erie looks eerie but also (for the task at hand) open — through windows, we see a woman go to work on bag of potato chips and the surly tender of bar tends bar — but they say no. Closed. "We're closed," is the quote reported to us.

We are not regulars, clearly, nor locals, obviously.

And so we cram into RedKiaSUV and onward we go toward bar No. 2, because we shan't be deterred. It's actually bar No. 3 — Sterle's Slovenian home was No. 1, "but they close at 8 on Thursday for some reason," says Pat en route to Mitzi Jerman's, down St. Clair, where we are denied again. TVs visibly on in windows, but door is locked. These are not auspicious beginnings.

(We later learn that we may have only had to ring the bell to gain entry at Mitzi's — one of the little quirks about each place you don't know until you go there but will never forget, like a secret password to get in or something — but for the moment):

"I need a beer," says Damon and he means on the double. Good thing right down the street we've got The Union Club, into which we happily stroll and the official experiences, such as they are, begin.

9:09 p.m., Union Club, 2549 St. Clair Ave. Pat keeps saying Lopresti's Union Club, and it's hard to tell if that's part of the name or something else. This wasn't even on the list tonight but Pat assures us that the Cleveland Bar Experiment is beholden to no itinerary.

"We don't often plan," he says. "Often we just go to a neighborhood and drive around until we find a place. This night was probably the most planned night yet, and the first two bars are closed." He shrugs.

We've gathered around one of the Tetris-piece tables, throwing back Bud Lights while we wait for others to trickle in. Todd Sheppard arrives first, another regular on the Thursday outings. Then Chris Garland, having trekked from Columbia Station where he moonlights as a DJ. They got denied at Erie Tavern too. Chris mentions the bartender being most displeased with repeated knocks on the door.

Union Club is sparse, apart from our motley and most amoebic crew. Large bedraggled man with t-shirt erumpent with belly nurses Bud-heavy in silence that looks like despair.

There's a raised area in back for pool and merry-making. A cigarette dispenser squats near the bathroom in the back. "At half the bars we've been to, people smoke," says Todd.

As for decor, it's all Union literature and evocative props of same: ranks and files of hard hats line the wood paneling behind and above the bar. Signage and decals for the promotion of cement masons, carpenters, electricians, etc. appear in unexpected corners. Plus Wahoos everywhere and signs of the "God Created Liquor to keep the Irish from Conquering the World" ilk.

Joe, our DD, is ordering onion rings for the whole class, and they arrive in two red containers.

Question: How good were the onion rings?

Conversation now has drifted to women. All the current CLEBAREXP men are married with kids, kids whom the guys put to sleep before they come out for the Thursday camaraderie. Though they've publicized their activities on Twitter, the general assumption is that women would spoil the fun somehow. It's the Cleveland Bar Escape.

A roving bus boy or barback type offers us five free tunes on the jukebox, and because it's early, we have another round and select five of the finest songs they have to offer.

9:32 p.m. Rolling south along East 36th Street now, while the unassuming facade of Payne Cafe looms. No bigger than a button, really, tucked between two taller brickwork buildings. Joe is working the GPS as Pat touches base with someone on the phone — establishing his whereabouts with the family, quite likely. Neon flickers ahead. "Open," thankfully.

Inside, the lone bartender holds court before an empty room, save for a woman knee-deep in the video game terminal's flashing lights. Apart from the blips and bloops coming from the game, it's quiet here. We've disrupted a stillness, though it's not clear whether that's a positive or negative development for this little joint. A paper cut-out "Happy Birthday" sign hangs from the ceiling. It's similarly unclear when the party took place. Weeks ago? Years?

Sidle up to the bar and order a round for the boys. We make it a raucous affair immediately. Fresh smokies are advertised, though no one leaps at the offer. "That's something we see a lot — smokies," someone says at some point.

Chris lights up the jukebox with the Stones' "Beast of Burden." Meanwhile, by the way, three Bud Lights total $6 here. The gang ambles toward the pool table in the back, letting their eyes graze the mostly drab interior of the place.

"What we should have also done is bathrooms — like pictures of every bathroom," Todd says, nodding toward another gent slipping into the commode. And he's right. Some of the WCs in this town are downright hellish. Others, of course, are gorgeous temples of relief. Payne Cafe leans steadily toward the former; the sink is located outside the bathroom. (This whole bathroom conversation will come up at irregular intervals throughout the night. At one point mid-commute in RedKiaSUV, Damon will interject all non-sequiturlike: "We've seen some pretty disgusting bathrooms.")