A southern rock god gets jazzed for his solo career. 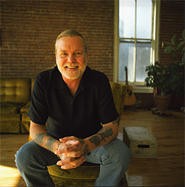 Back in 1973, Gregg Allman titled his first solo album Laid Back, and that's exactly how he sounds over the phone from his home outside Savannah, Georgia. "We got this offshore thing going on," he says. "I built this house on this little bayou with a western view. It's a beautiful place. You can't hear anything but birds chirping and squirrels running up and down the huge oak trees."

Allman is resting up, giving his voice a break between the second and third legs of his current solo tour. "On the second one, I had my son Devon out with me," he says. "I was so proud of him. He had all kinds of heartaches. God, I could see myself in it a bunch of times. The first gig -- the first night he joined up with the tour -- was in Capistrano [California], and three nights before that, they [Devon's band, Honeytribe] played in Boston, and they had to drive. I'm really not laughing, because I remember ours was Philadelphia to the Fillmore West -- only it was via El Paso, because it was this time of year, and the overpasses were all iced."

As a solo act, Allman offers something very different from the legendary group that once had to avoid all those icy overpasses: the Allman Brothers Band. While the group's 1971 classic At Fillmore East is an intense exploration of blues-rock improvisation, particularly in its 2003 double-disc "Deluxe Edition," it can get a little wearying to hear a set of nothing but epic, swirling jams -- no matter how ably played. In contrast, the organist and singer's new material is a tight blend of hard rock and southern soul, with a surprising element of jazzy, hip-shaking swing to its groove. Gone are the endless guitar solos and bobbing, stoned heads.

With this new direction comes a different set of collaborators. The band includes pianist Neil Larson, guitarist Val McCullum, percussionist and backing vocalist Floyd Miles, and saxophonist Jay Collins. "When I was looking for a sax player, I said I wanted somebody that plays like Stanley Turrentine, but I don't want to pay Stanley Turrentine," Allman admits with a laugh. "I love his attack, and man, this guy sounds just like him."

As Allman describes his band, it quickly becomes obvious why the current bill reads "Gregg Allman & Friends." These are longtime musical compatriots. He says of Larson: "I've known him for about 38 to 40 years. My brother [Duane] used to know him. He's always been a hell of a piano player, and he's a good instigator. He's good to write with. He can just sit there and jam." Similarly, he describes Miles as "my good friend, who's been with me since '73, when I started my first solo band.

"I got Steve Potts playing drums from Booker T.," he continues. "Between him and the Groovemaster, Jerry Jemmott, you can't get better than that unless you get Ray Brown."

It might not be surprising to hear Gregg Allman -- who despite his aging biker image is a musician's musician -- name-checking jazz greats like Ray Brown and Stanley Turrentine. The question is, how many of his fans listen as broadly as he does? A Gregg Allman solo gig challenges listeners who came just to hear such Allman standards as "Whipping Post." The man himself divides his time between guitar (which, ironically, he picked up before his legendary late brother Duane did) and the organ, for which he's most famous.

"I play about half and half," he says. "Some electric guitar, some acoustic guitar, some finger-picking -- doing some songs off the Laid Back record. We do a couple of songs I wrote. They're Allman Brothers songs, but I wrote 'em. We do 'Midnight Rider' the way it was written, which is the way it is on the Laid Back record. There's the Brothers version of it, but it's almost two completely different songs. There's certain songs we gotta play, but anything that we play, it's totally reworked. It's basically rhythm & blues -- just shake-your-moneymaker, good old bumpin' rock and roll."

Longtime fans will be pleased to hear that Allman is considering capturing some of this R&B flavor in the studio sometime soon. After all, a decade has passed since his last solo disc, 1997's Searching for Simplicity. "I'm gonna try to do that," he says when asked about the rumors. "We have a lot of time this year."

It's a period of relative leisure, by Allman standards: The Allman Brothers Band is playing its traditional week-long stand at New York's Beacon Theater, which will be followed by one leg of national touring, but the rest of the summer remains wide open. He might even get to spend some time in that Savannah house.

Allman's hand in the creation of a next generation of southern rock -- primarily through his son's band, Honeytribe -- is interesting, coming as it does on the heels of his recent induction into the Georgia Music Hall of Fame. He performed "Midnight Rider" with R.E.M., another act celebrated that night (as were hip-hop producers Dallas Austin and Jermaine Dupri).

But does Allman still see southern rock as a force?

"[It] is. There's just not such a big to-do about it," he admits. "They don't really even call it southern rock anymore. It's just good music, and it comes out of wherever it comes out of."