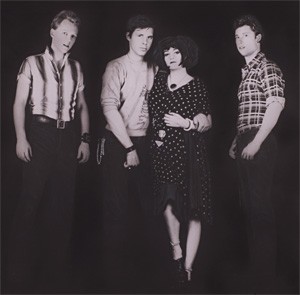 From her home in rural Missouri, punk-rock godmother, author, and artist Exene Cervenka sounds like any other midwestern housewife. "It's still very old-fashioned here," says Cervenka, who co-founded X in Los Angeles back in the late '70s. "It's a simple life, with a lot of land and a lot of cows."

Cervenka will soon leave her peaceful abode and head back on the road with ex-husband John Doe and the rest of X, playing songs from the band's classic catalog on the 13 x 31 Anniversary Tour — which has been knocking out fans both old and new. "There are a lot of kids in the audience, plus the people who have followed us for years and years," says Cervenka. "It's just a great mixture of energy."

The same could be said for X itself. With original guitarist Billy Zoom — who left the group in the mid-'80s — reestablishing himself as a vital cog in the band's punkabilly machine, X pretty much sounds like it did in its prime. It doesn't hurt that most of the songs the group is playing these days come from its first three albums — each of which defined and expanded the notion of what punk rock should sound like.

Nearly three decades after their release, Los Angeles (1980), Wild Gift (1981), and Under the Big Black Sun (1982) have become a holy trinity of West Coast punk albums. "All of those early records had an emotional intensity," says Cervenka.

X has always stood apart from the pack. Former Doors keyboardist Ray Manzarek produced those first three records, and it caused quite a stir among L.A.'s tight-knit punk scene back in the day. After all, these were young, loud, and snotty kids who despised the longhaired, drug-addled stereotype Manzarek represented. But Cervenka and crew shoved aside the doubters. "Ray Manzarek so transcends being a hippie," she says. "And the Doors were such an amazing fucking band."

X is even hauling out the Doors' "Soul Kitchen" on its current tour. But the show's centerpieces are songs like "The Hungry Wolf" and "Blue Spark," which interlock Cervenka and Doe's voices as they recount tales of lust, conquest, and rejection.

Those are common themes in X's music. But these days, with Doe sporting patches of gray and drummer D.J. Bonebrake gone completely bald, X heads straight into its collective mortality by loading its sets with the hardest, fastest, and bleakest tunes it has — like "The Phone's Off the Hook, but You're Not" and "Johnny Hit and Run Pauline." "We always said our songs were deep, dark, bad thoughts with happy music," says Cervenka.

The band, especially Cervenka, knows a thing or two about falling into deep, dark places. The desolate Under the Big Black Sun was made soon after Cervenka's sister was killed in a motorcycle accident and just before the singer's marriage to Doe fell apart (she was also married to The Lord of the Rings' Viggo Mortensen). Two decades later, problems that eventually broke up the band still surface from time to time. "We had to work some things out among the four of us," admits Cervenka. "Especially in regards to what are our expectations, what are our demands, what are our needs, and how do we work together?"

The original X called it quits before the '80s were over. Cervenka, Doe, and Bonebrake got back together a few times in the '90s with different guitarists — even recording an album in 1993, the blah Hey Zeus! Zoom eventually rejoined, and X has hit the road every few years over the past decade to tear through its old songs again.

Cervenka gets a bit wistful thinking about the old days, when X would share gigs with bands like Black Flag, the Circle Jerks, and Minor Threat. A few of those groups still tour occasionally; most split up years ago. Both Doe and Cervenka have released several solo records since the late '80s. They've also recorded and performed together as the Knitters, an alt-country group that formed during X's heyday. Cervenka also paints and pens poetry. She has an exhibit opening in New York this summer. But first, she's got her old band to think about. "The traveling gets a little old, and we're not kids," she says. "But there's a lot harder jobs around than riding in a van."

She hopes this most recent tour won't be misconstrued as a mere nostalgic trip by a bunch of graying punks. Cervenka says the band recently talked about going into the studio to record some new material. "There are songs in the works," she says. "But I don't know if we'll have 12 songs for a CD or just three for the internet. I'd be very happy with just one new X song."