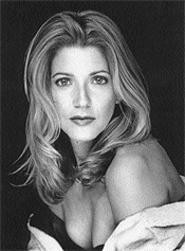 At first, you don't want to admit it, because it seems somehow wrong--just too easy. After all, the woman on the other end of the phone line is not that woman seen every Sunday night on HBO, lamenting the sad, sorry state of her love affairs. She's not an actress or a character, but a real person--an author of two books, a 41-year-old woman in a happy relationship, a successful writer who divides her time between three homes (in New York, the Connecticut countryside, and London) when not on the road promoting her latest novel. Still, you can't escape the obvious. It's there--this sound that can't be ignored.

Candace Bushnell, author of the book titled Sex and the City, sounds just like Sarah Jessica Parker, star of the TV show titled Sex and the City and the woman who, for the past three seasons, has played Bushnell's alter-ego, sex columnist Carrie Bradshaw. Talking to Bushnell is like appearing on an episode of Sex and the City, albeit a sometimes dull and hard-to-follow episode (after all, there's no sex on a fire truck). Bushnell and Parker share the same burnished whine, the same stuttered rhythms, the same amused exasperation. When Candace begins talking about her affinity for the flawed female literary heroine, you can easily imagine the words coming from Carrie's mouth as she dines with girlfriends Samantha, Miranda, and Charlotte over a lunch of Cosmopolitans and croquembouche at Balthazar. They are all, of course, wearing Dolce & Gabbana and Prada while talking about funky spunk, lifelike dildoes, and how you can fake an orgasm but not intimacy.

"Carrie Bradshaw and Bridget Jones are not classic literary heroines," Bushnell says. "These are everygirls, and by definition, an everygirl is not a classic literary heroine. Look at any of the classics. Anna Karenina--can we talk about pathetic? OK? Becky Sharpe in Vanity Fair? Sorry, but Daisy Buchanan? Horrible character if you look at it." It doesn't help that Bushnell explains before the interview begins that she has a camera crew with her, documenting the life of the Famous Author. Life can only imitate art for so long, before they become the same awful but kinda wondrous thing.

Every now and then, a journalist will actually confuse Carrie with Candace. They will stop in the middle of an interview and complain that Candace isn't as witty as Carrie; they will wonder aloud (and really, what nerve) why she doesn't utter those pithy, familiar one-liners--like, say, "Man may have discovered fire, but women discovered how to play with it." Every now and then, Bushnell will have to remind her interrogators that, hey, this ain't TV.

"I live the rest of my life as a normal person," she says. "I have my friends, my boyfriend, I work, I do the same things that everybody else does. [The show] is not something that is in my face. And I've lived in New York City for 20 years, so I've known people here for years and have been going to the same restaurants, so there isn't like a big, big change in my life. The only thing that happens that sometimes pisses me off is I have done interviews, and people say"--she affects a nasal whine--"'But you're not exactly like the character. You're not as funny.' It's like, 'Hello. I don't have four comedic television writers writing jokes for me. Get it?' That's annoying, but it's not that confusing."

So get it straight: Carrie Bradshaw is not Candace Bushnell, at least not the current model. Bushnell likes to say that her TV counterpart is the 1996 vintage, back when she was still dating Mr. Big (in reality, Talk Media president Ron Galotti) and trolling Manhattan for stories about threesomes, sex swap meets, and how men who ride bikes have stinky crotches. Today, she's in a relationship with an English venture capitalist named Stephen Morris--the ex-boyfriend of Bushnell's ex-best friend and roommate of more than a decade. Today, she's a novelist, having just published Four Blondes, which contains four stories about four women in search of the Perfect Relationship--or, in the case of Janey in the book's first tale, a place in the Hamptons for the summer.

The new book reads much like the old book, even if reading both is like not reading at all (a compliment, really, as Bushnell possesses a deft, funny, and very light touch). Men and women cross paths, even fall in love for a moment or two, even have kids. They screw, screw up, screw around, screw themselves; they think things they never say and say things they never do (like divorce their philandering husbands or boorish wives). They are never happy, because they are never complete--not Janey, the pseudo-supermodel house hunter; not Winnie, the unhappily married journalist; not Cecelia, the paranoid American princess; not even the unnamed narrator of the final story, the New York sex columnist who moves to London in search of a husband. Actually, that last part's not quite true: At the end of the story "Single Process," we're left to believe that the heroine, Candace but not Candace, is indeed happy and in love, and her mother wants to know about floral arrangements. But that, Bushnell concludes, "is another story."

Whether it's a true story is a moot point. Remember: Candace is not Carrie, nor is Candace really the woman at the end of Four Blondes. But for a moment, she considers the fact that, yeah, it might be easy to lose one's self in a world of fictions piled atop fact.

"But I don't get lost, and the reason why is probably because..." She stops, then begins again. "A friend of mine once said about me 10 years ago, 'That Candace Bushnell, she's got a lot of different sides.' And it's true. Ever since I was a kid, I was basically like this. I was in drama club, I played tennis, I rode horses, I ice-skated, I was a huge reader, I used to write little plays, I was in school plays. I was always doing...I do have a lot of different aspects to my personality, probably because I'm somebody who doesn't put the brakes on myself. I grew up in this family where we were really allowed to be who we were, so I've never said, 'Oooh, I can't do that.' Actually, that's not true: I can't be an actress, because I went to acting school, and I sucked. But I'm very...I think I'm just a very secure person at my core, so I feel like I know who I am."

Not so long ago, she was unknown outside the Upper West Side. In 1994, 17 years after the Connecticut-born Bushnell left Rice University for New York and a never-happened career as an actress, her column began appearing in the New York Observer, the upscale broadsheet weekly that still employs Rex Reed and manages to make everything about New York seem, like, totally fabulous. (Last week, Christopher Walken cooked dinner for one of the writers.) Contrary to popular myth, the book on which the show is based is not simply a compendium of columns. Bushnell got her book deal after a mere five columns had appeared in print; the rest she likes to consider a serialized novel. Although each piece was self-contained, she didn't want to take it for granted that people read all the pieces and always knew where she was in the story.

When Sex and the City was published by Atlantic Monthly Press in 1996, Bushnell visited bookstores in two cities, Miami and Los Angeles. Now, the book tour has become a lifestyle: She will visit more than two dozen cities between now and the middle of November, stopping along the way in such towns as Madison and Cincinnati, as far from London or Manhattan as one can travel without a space ship. Though she still schleps from hotel to book signing in a handler's Honda--and not a limousine, she reminds us, not like a movie star--she recognizes that such a tour confirms her status as a pop culture figure. A few months ago, she even wrote a piece about being "semi-famous" for Harper's Bazaar.

"Someone asked me about that: 'Why semi-famous?'" she says. "Well, the truth is, semi-famous is funny. Famous isn't funny, and not famous isn't funny, but that concept of semi-famous is a funny concept. I think I am a funny writer. I think that some of my stuff is hilarious. I don't mean to be boasting, because that is the one thing I will say. I think Four Blondes is hi-la-rious. I love it. But being somebody who's a funny writer, you just instinctively know where's the joke, and the joke is in those word semi-famous. But do I really think I'm semi-famous or not semi-famous? Like, no. Somebody who is quite famous said to me, 'You don't define if you are going to be famous or not famous. The public decides if you are going to be famous.'"

For the moment, the public has made its decision: She has been granted her fame, her great table at a great restaurant where she can show off her great wardrobe and great boyfriend. It's a great life, all carved from a column about sex and its messy residue--not bad at all. Actually, this is how fabulous her life is: When informed that USA Today, on the morning of this interview, has referred to the characters in Four Blondes as "pathetic and despicable," Bushnell gushes. She takes the knock as high praise. Her whole life is one giant silver lining. Actually, it's probably more like platinum.