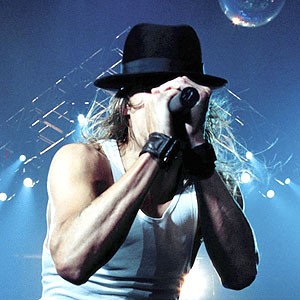 Kid Rock's neatest trick is that he's made a career out of performing all the music he grew up listening to — rock, rap, and country — and making millions off it. "I loved rock and roll first," he says. "But I've always wanted to be a rapper, and that's what I still consider myself."

On his new concert CD, Live Trucker, Rock wraps up the past decade — "before I take it to the next level," he says — with what's essentially a greatest-hits set. It includes his breakthrough hip-hop cut ("Bawitdaba"), his country hit ("Picture"), and his southern-rock song ("Rock n' Roll Pain Train"). "A live record says something about a career, if you can make it to a live record," he says.

Rock's now on the road with his band. But without any new material to push, they're playing covers ranging from Lynyrd Skynyrd and AC/DC to the Ramones and Grandmaster Flash. "This is the all-the-tricks tour," he says. "We have the fire, the elevators, the girls — everything's there onstage."

For a guy who wears a diamond-studded fur coat while performing, Rock's relatively grounded. He still lives in Detroit, where he grew up, and he maintains Midwest sensibilities (if you don't count the stripper pole in his house). "Balancing it is the hard part," he says. "You can get wrapped up in all of it. But being mellow is no fun. I don't want to go back to my hotel room and curl up with a good book after a show."
Sat., April 15, 8 p.m.