The art museum plays baby-sitter with the Smithsonian's Treasures of the Gilded Age. 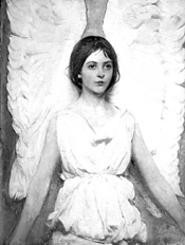 So what do 50 or so of the country's greatest art treasures do when the Smithsonian kicks them out during renovations? The same thing we did when we were booted from the house: road trip!

Which means that local art lovers can cancel their excursions to D.C. (unless you really like the aesthetics of dropcloths and cinder blocks), because all the good stuff is here in Cleveland. The Gilded Age: Treasures From the Smithsonian American Art Museum, opening February 23 at the Cleveland Museum of Art, features some true American masterpieces that the Smithsonian normally wouldn't let near an open window, let alone a traveling road show.

"It's a feel-good exhibit," says Henry Adams, the curator of the show, which takes its name from the historical era between 1870 and 1920. "The pieces are beautiful, but there's also a strong emotional undercurrent that I think arose from the time period."

The Gilded Age was the moment in American history when the gains of the Industrial Revolution finally gave the word "millionaire" reason to exist. And the upper crust needed something to do with all the green leaking out of their overstuffed pockets. "All those rich people liked to think of themselves like the Medicis," says Adams. "So they became patrons of the arts."

Many paintings of the period glorify the nonchalant excess that put the "idle" in "idle rich." But Gilded Age art was more than just glitz and gold. "There's an enormous emotional life to these works," says Adams. "It was a very materialistic time, and many of these people were looking to reconnect to their roots in some way, so we see a lot of religious and mythological imagery.

"But there was also this new sense of Darwinism in the world. Even for very religious people, God was more distant than ever before. That comes across in the art."

Take Albert Pinkham Ryder's "Jonah," a depiction of a damp, distressed Jonah being tossed about in a storm of Sebastian Junger proportions. "While you can recognize the subject matter, this painting is more about energy," says Adams. "He and some of these other artists may not be household names like Winslow Homer, but they were extremely significant."

With more than 50 of the Smithsonian's paintings and sculptures, as well as a couple dozen of Cleveland's own properties on display, the exhibit promises to give Northeast Ohio an unprecedented look at an important period of American art. "There are some real surprises in there," Adams says. "People are going to go in, look at these works, and feel some real emotion."