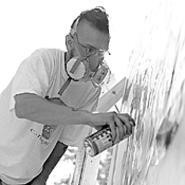 "People always complain that hip-hop is dead, but it's right here downtown," announces Iyan Anomolie, the MC who'll be hosting the third-annual City Xpressionz Aerosol and Urban Art Festival at Market Square on Saturday. Detroit's Athletic Mic League headlines the event, which features a spray-can graffiti competition, live performances, and b-boy and b-girl battles -- an audience favorite. "There had to be 50 b-boys there [last year]," says Anomolie.

Graffiti artists are brought in from around the country, and they inspire attendees, Anomolie says. With canvases lining the street, it doesn't take long before everyone wants a piece of the action . . . as well as a stab at the cash prize. "I've seen random people pick up a can of paint and paint a canvas," recalls Anomolie. "And that's a beautiful thing." But it's the out-of-town pros who usually take home the loot, he adds.

As for his hosting gig, expect Anomolie to exhibit a similar free-form style. "I'll crack jokes about people in the audience," he says, laughing. "I feel like Big Brother in this community right now." City Xpressionz happens from 10 a.m. to 7 p.m. at Market Square Park (the corner of Lorain and West 25th Street). Admission is free. Call 216-621-5330 for more information. -- Nadia Michel

As he drifts off to sleep listening to Motown music, Andy Robertson wishes he could ask Roy Orbison or the Ronettes to perform his tunes. But dreaming about it will have to suffice. With a stack of old 45s in tow, the Tough and Lovely guitarist is on the road, working the band's debut CD, Born of the Stars, with a series of release parties that brings the Columbus quintet to town on Sunday. "I think it's about the closest to real, vintage R&B that some white kids like us can get nowadays, without sounding contrived," Robertson says. And while the group calls Cowtown home, the welcome mat rolls out just as easily up north. "People in Cleveland do a lot of head-nodding and toe-tapping," says Robertson. "So we fit in there just fine." Music starts at 9 p.m. Sunday at the Beachland Ballroom, 15711 Waterloo Road. Tickets are $6; call 216-383-1124. -- Cris Glaser

Two very appealing leads (Sara Rue and Kett Turton) rescue a terrible script from disaster with inspired and sympathetic performances in Gypsy 83. Rue plays Gypsy, a 25-year-old Stevie Nicks wannabe; Turton is Clive, her gay-boy buddy. Together, they leave Sandusky for "The Night of 1,000 Stevies" in New York, Gypsy in pursuit of her rock-star dreams (as well as her long-departed mother) and Clive along for the ride. On the way, they shock the locals, crash a karaoke bar, and adorn a highway rest stop with more candles than seems healthy. It's at the Cleveland Cinematheque (11131 East Boulevard) at 9:20 p.m. Thursday and 9 p.m. Sunday. Admission is $8; call 216-421-7450. -- Melissa Levine

At first, most women think it's a joke when they come early for Ladies' Night and the doorman hands them $5. But it's serious business at Squeeze Play, where the club hands out cash to the first 100 women. And whenever the DJ spins two oldies back-to-back, drinks are a buck. It starts at 9 p.m. Thursday at Squeeze Play, 5178 Pearl Road. Admission is free; call 216-661-6213. -- Cris Glaser