Does a new store promise a pervert with a conscience? 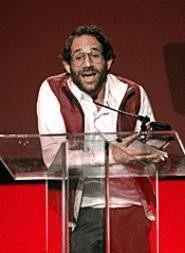 If you're a hot young thang thinking of applying at the new American Apparel store -- opening on Coventry January 1 -- you may want to reconsider.

The company is best known for its benevolent labor practices. Its affordable line of casual wear is sweatshop-free and 100 percent U.S.-made. All its factory workers -- based in L.A. and largely Latino -- are paid double the minimum wage and offered affordable benefits, subsidized lunches, and free English classes.

"I wouldn't call him a pervert," says Cynthia Semon, an American Apparel spokeswoman.

Charney makes frequent visits to all his shops and is hands-on about hiring at each one. Ladies, you've been warned.

Same as the old boss
Last week, Mayor-elect Frank Jackson named Ken Silliman as his chief of staff, formally ringing in the return of the Mike White administration. Yippee!

Silliman was an aide and confidant to White, the former mayor and future cook at Lucasville. The attorney stumped hard for Jackson before being named his top assistant last week. He told The Plain Dealer, apparently with a straight face, that "I'm really looking to [Jackson's] administration, akin to 1990."

Ah yes, 1990 -- the good old days, when five bucks and a pack of cigs could buy you a major construction project.

"When I read that, I swallowed hard, let me tell you," says Councilman Mike Polensek. He's trying to keep an open mind about the new administration. But after Scene exposed the fed's theories about White's widespread bribery ring, the sight of guys like Silliman lurking in City Hall is tough to take.

"These guys were all there," he says. "We all know now that the whole [minority-hiring] program was completely pimped. And these guys were there.

But Silliman says he too was scammed, just like everyone else. "I would ask anyone who asks those questions: Have they ever had a friend who let them down? We've all had friends that have let us down over the years. Nate Gray got involved in the things he got involved in . . . and to hold Mike White responsible for that is unfair."

Unless, of course, Gray couldn't possibly have pulled off his bribery schemes without friends in very high places.

Inside job
Facing an overwhelming backlog of foreclosure cases, Cuyahoga County recently set out to hire new magistrates to handle the load. In a normal, well-managed, properly functioning county, this would have entailed advertising the jobs, in hopes of attracting the best candidates. But in Cuyahoga, it was simply time to play another round of patronage! [Cue the theme from The Price is Right. ]

Court Administrator Thomas Pokorny admits that he only advertised inside the court. (Read: We want to hire our friends.) Unfortunately, that's not even true, since Pokorny hired two magistrates -- one of whom just passed the bar in May --without even telling the county's judges. Which is strange, because the magistrates work for them.

"None of the judges were even told the positions were open," says Judge Nancy Russo.

So Judge Mary Jane Boyle posed a novel idea: Why not let people other than Justice Center cronies apply? Boyle and 11 other judges sent a letter asking Pokorny and Administrative Judge Richard McMonagle to stop hiring until they come up with a "fair and open" process. Stanley Miller, the head of the Cleveland NAACP, wrote a similar letter, urging the court to hire more African Americans.

The protests worked. Pokorny says he's now working on advertising the next four jobs. They'll still eventually go to Justice Center cronies. But even a fraudulent appearance of openness is a big step forward.

Fighting for the little guy
Union workers at Ford's Brook Park plant can finally rest easy -- Dennis Kucinich is on the case.

Employees are concerned that the overweight automaker, having just closed its Lorain assembly plant, may look to trim some fat at their place. But where workers see eroding job security, Kucinich sees a photo op! So he called a press conference to say he'll be fighting for . . . well, you know the drill. Motto: Dennis Kucinich, Exploiting Your Misery Since 1996.

Of course, having Kucinich on your side is like having a hairdresser cover your back in a bar fight. The same day the photo op made news, the Tribe announced that it would start showing games on free TV, recalling Kucinich's last great battle on behalf of Cleveland.

In 2002, he orchestrated a photo op outside Jacobs Field to denounce the Tribe's move to cable. He subsequently authored the Fan Protection Act, which provided tax breaks to team owners only if they agreed to air games on free TV.

But Kucinich waited until after the team had already signed a deal with Fox Sports Ohio to get on his soapbox. And the bill, not surprisingly, died in obscurity.

The Indians' recent change of heart came not from the congressman's long-forgotten threats -- think of a poodle barking from a Chardon matron's lap -- but from the almighty cha-ching.

Uncle Tom's Christmas
Just in time for the holiday season, Secretary of State Uncle Tom Blackwell has decided to spread Christmas cheer by tricking voters into giving him some dough.

In an e-mail that begins with the subject line "How to Save $100 This Holiday Season," Blackwell tells supporters that they will save $100 on their taxes if they fork over the money to his gubernatorial campaign instead.

Of course, you won't actually save anything. If you give $50 to a state political candidate, Ohio gives you a $50 credit on your income taxes. It's an ingenious way of funneling money directly to politicians, instead of having it designated for roads, etc., which means that politicians will have to steal it, which means a lot more work.

If you're married, you can double your contribution for a $100 credit, Blackwell explains.