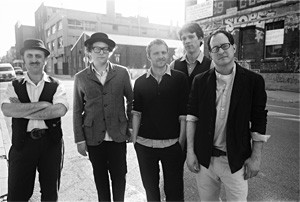 On a comfortably cool night in December 2006, the Hold Steady climbed on the Grog Shop's stage a little before midnight. "Where were you the first 4,000 times I played your city?" asked visibly sloshed frontman Craig Finn.

The N.Y.C.-by-way-of-Minneapolis band had indeed played Cleveland before. But following the release of its terrific third album, Boys and Girls in America, a couple of months before that gig, the quintet was elevated to It Band status by bloggers, critics, and regular ol' music fans. There was a packed house to see Finn's wild narratives — stuffed with sex, drugs, and Catholic guilt — played out onstage.

Nearly 90 minutes after the concert started, a drunk and hoarse Finn led his bandmates and the crowd in a sing-along of Boys and Girls' "Southtown Girls." By the time the show wound down with a woozy "Killer Parties" (from the Hold Steady's 2004 debut, Almost Killed Me), two dozen audience members were onstage with the band, fondling instruments and hugging an amused Finn, who finally got the Cleveland welcome he was hoping for.

That pretty much sums up the Hold Steady experience. And its appeal. The band's fourth album, Stay Positive, came out on Tuesday, and a monthlong tour kicks off in Cleveland this week. Finn spent a small but formative chunk of his childhood — when he was four and five — in Shaker Heights. "My first memories are there," he says. His college roommate went to St. Ignatius. "If I would've stayed around, I was heading into that direction too," laughs Finn, Catholic boy to the core.

Finn's parochial-school kids, swirling in torrents of sloppy sex and cheap drugs, are the best-etched Catholic characters in American rock and roll since Bruce Springsteen asked Rosalita to sit by his fire. Holly and her friends — who circle in and out of Almost Killed Me and 2005's follow-up, Separation Sunday — are at the center of booze-soaked stories that could take place in any Smalltown, U.S.A., where bored teens kill time by getting drunk and occasionally naked.

"All of them are based on the type of people I knew when I was that age," says Finn, who looks more like a CPA than the singer in America's best rock band. "I think of it as a cinematic thing — getting these characters to tell a bigger tale."

Stay Positive adds harpsichord, banjo, and other instrumental oddities to the mix — swelling those E Street Band comparisons that have hounded the Hold Steady from day one. (The album's first single, "Sequestered in Memphis," sounds more like The Wild, the Innocent & the E Street Shuffle than anything the Boss has done in the past 20 years.) The usual cast of druggies, jailbirds, and street punks populates the CD. But there's a ticking clock keeping the beat this time around.

"The record is really about an attempt to age gracefully," says Finn, who turns 37 next month. "In rock and roll, that's a tough business — becoming an adult and dealing with adult responsibilities and situations, but trying to maintain some of the ideals that were important to you when you were young."

The Brooklyn-based quintet (Finn, guitarist Tad Kubler, bassist Galen Polivka, drummer Bobby Drake, and keyboardist Franz Nicolay) recorded nearly 20 songs on the road last year. "We had a tremendous outpouring of creativity," says Finn. Eleven of those tracks ended up on the album. The closer, "Slapped Actress," was inspired by maverick filmmaker John Cassavetes' Opening Night, a 1977 movie about a stage star on a downward spiral. "Cassavetes kept up his passion for his art, and his self-destructive behavior ended up destroying him," says Finn. "There's a weird metaphor there."

"People are consuming music quicker," says Finn. "It takes some pressure off you when you make records quickly. If you're waiting three years between records, it better be a masterpiece."

Those bursts of inspiration — especially the hotel demos the group recorded on its last tour and that serve as the album's blueprint — fueled much of Stay Positive. But Finn says the band wanted some distance from 2006's Boys and Girls in America. "We wanted to be more musical this time," he says. "I even took some vocal coaching.

"I think we're more focused now," he concludes. "It was hard before, when we were juggling jobs. So much of our lives is now dedicated to the band. We think of little else than music these days."