Friday, July 4, at the Jigsaw. 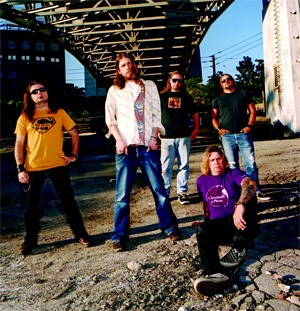 Once again, the Amps will go to 11 as the Parma rawkers reunite for a one-time-only show. Scene readers voted Amps II Eleven the city's best rock band in 2005 — thanks to gritty tunes like "Gas Ass or Grass" and "Bourbon Sprawl." The punky metallic group formed from the ashes of Stepsister and includes members of Kidd Wicked and 9 Shocks Terror. After releasing one self-titled album in 2004, the Amps abruptly broke up in January 2007. Bassist Tony Erba says this weekend's gig will feature the original lineup, "the one that really destroyed" — guitarist Aaron Dowell, guitarist Attila Csapo , drummer Steve Callahan, and frontman Matt Wroth. "I wanted to do something to make my 40th birthday suck a little less," says Erba. "Aaron has always been really bothered by the way our last show went, and I never wanted the band to end. So I think this might be a good way to settle accounts and shatter people's tympanic membranes one last time."