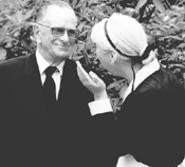 It's 1920, and you're a guest at Franklin and Gertrude Seiberling's gracious estate in Akron, also known as Stan Hywet Hall. You leave your calling card with the butler, who informs you that you are one of several guests who will be dining there this evening. His reference to dinner is the first of many during your stay, though you will leave without having a morsel of food. You will instead fill up on a taste of what life was like 80 years ago.

For two weekends in September, Stan Hywet Hall and Gardens will be putting on History Firsthand, a new event that transforms the Tudor Revival mansion into a sort of time capsule where visitors can talk to the Seiberlings' domestic staff and friends.

For instance, there's Kathleen Hemmings, the chambermaid, who's gaga over Guy Graber, one of the chauffeurs. "He's dreamy," she purrs, then shoots a sharp look at any females within earshot. "And he's mine."

There's houseguest Abigail Montgomery, a socialite with an interest in the arts and a fascination for social causes, particularly women's suffrage -- women having recently been granted the right to vote.

There's also John Gammeter, a neighbor of the Seiberlings, who is not shy about voicing his opinion that women should stay home raising children and not be out voting or, worse, running for office. Gammeter owns a small airstrip used for single-engine airplanes. His passion for flying mystifies Lyda Burkett, the ladies' maid. "I can't imagine going up in an aeroplane," she says. "I don't think man was meant to fly."

Altogether a dozen characters entertain visitors while ushering them through the house. The Seiberlings' staff and friends are portrayed by volunteers, who are required to stay within character even as they banter with the guests. And the guests are encouraged to ask questions.

Just don't ask where that chauffeur fellow is hanging out, or you'll have an angry chambermaid on your hands.