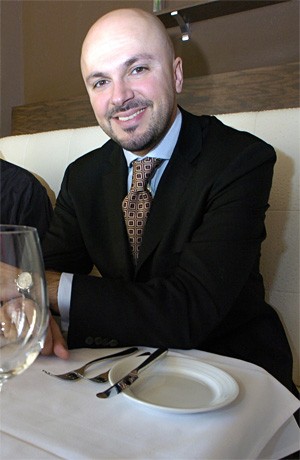 LeBron James is in trouble, and it has nothing to do with his paltry field-goal percentage. The King of Akron took a beating when Punch reported two weeks ago that he left a waiter a mere $10 tip for an $800 bill at XO Prime Steaks, though he kept the staff there till 3:45 a.m.

In an ultimate act of arrogance, he did manage to autograph the tab, as if this cherished memento was much more valuable than, say, getting caught up on the heat bill.

It wasn't the best of PR moments for a man who's done his best to cultivate the image of Not Just Another NBA Poseur. Though LeBron has been conspicuously charitable in Akron, among Warehouse District waiters he's better known as King Stiff, a guy unable to calculate a 5 percent gratuity, much less a 20. And those who serve him say he's only gotten cheaper as his fame and mutual funds bloat.

Perhaps worse is that the entire Cavs roster seems to be following his lead, doing its best to solidify the stereotype that black people don't tip. Ask waiters at the higher end joints, and they openly wonder whether they can survive another Cavs season.

So LeBron and XO owner Zdenko Zovkic have done their best to downplay the incident, invoking the old Blame It On The Underling Strategy, an excuse that only works for the Clintons.

"Our waiter mistakenly read the receipt, inferring that Mr. James had left him only a $10 tip," writes Zovkic.

LeBron's handlers also tried to downplay the incident, telling the New York Post that LeBron misread the bill. "There was a misreading of the receipt, and the appropriate tip was provided."

But it's not exactly believable spin, since waiters possess the vision of starved falcons when it comes to reading the gratuity line on credit-card slips. And when you're stiffed that bad, chances are you're gonna re-read it three or four times — purely out of disbelief that a man that rich could be that cheap.

And as a frequent patron of XO, LeBron knows that dinner for two equals the down payment on a new yacht, which is why he had a gofer shuttle over a $200 tip the next day.

It looks like someone could use the services of Dick Cheney.

Muddied Finances
For 22 summers, thousands of Midwesterners looking for a new way to get drunk have flocked to the Mud & Grass Volley-Dodgeball Tournament. Held the past few years in Richmond Heights, the tourney's premise is pretty simple: Dig pits in a huge field. Fill with water and erect a few volleyball nets. Provide 55 kegs of beer. The rest takes care of itself, and proceeds go to charity.

Of course, if it all went down like that, you wouldn't be reading about it here.

Last summer, WAGS 4 Kids, a charity that provides service dogs to disabled kids, claimed to have been stiffed by tournament organizer Scott Baltusnik.

When Baltusnik first approached WAGS' Wendy Nelson, he estimated her take would be about $25,000. In return, Nelson stocked the event with volunteers.

But last year, Nelson received checks totaling only $6,000 — and $5,000 of that she raised on her own by soliciting a donation from Bil-Jac, a dog food company. Which means that Baltusnik was trying to get over with a $1,000 donation.

"I think he thought because we're a small, local charity, it'd be easy to stiff us," says Nelson. "But frankly, it's just the opposite. This isn't paper-clip money to us. This is our budget."

"There is a law that allows people that run these kinds of events to make money for themselves doing so," says Nelson. "But that's not what this is. I would bet you that when he took the money, he never declared it as income."

Since she filed suit, Baltusnik has twice tried to settle with lowball offers of an additional $6,000, then $9,000, she says. But his tournament has jumped to a different charity every year, from the Epilepsy Foundation to Big Brothers and Big Sisters. Nelson suspects he's a serial scammer. "I want to see an accounting of where the money went," she says. "If he paid himself $15,000, I want to see a tax return."

Reached by phone, Baltusnik takes a wait-and-see approach to Nelson's accusations. "I've got to read the article before I can dispute what she told you," he says. "But as far as the lawsuit, the allegations are not true."

Still, Nelson understands the emotional juice she'll carry into court: "We've got 15 families with dogs and kids in wheelchairs, and they're going to be there at court."

Noteworthy is that this July's tourney has no charity attached. But a cancellation disclaimer reads: "No refunds will be issued; all fees/charges will be considered a contribution to the charity."