Venerable Giovanni's still dazzles with its unyielding attention to detail. 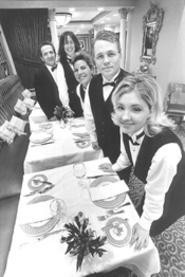 Passing through the massive carved doors into Giovanni's is like finding sanctuary. Blessed relief from the burdens of the 21st century waits here, couched among the velvet draperies, tasseled pillows, and burnished woodwork. Within this dimly lit cocoon, there is no thumping house music to remind you of the relentless pace of modern life; instead, classic operatic arias weave themselves among the poured-concrete columns that frame the dining room and its opposing bar. If the servers have secret lives involving tattoos and piercings, you'll never have to know about it, garbed as they are in formal attire and clearly devoted to nothing more or less than your total satisfaction. And while -- yes, even here -- the black-granite-topped bar is backed by a television, the pervasive techno-cultural icon is at least set into a gilt frame, letting it masquerade as a work of art.

It's no wonder that the restaurant, newly remodeled and more intimate than ever, is one of the region's only two remaining AAA four-diamond award winners. (The other is the Baricelli Inn in Little Italy.) Safe, sedate, and entirely civilized, Giovanni's is where you take your parents or grandparents to show them that you really did turn out all right, after all. Or, if you are of a certain age yourself, this is where you come to dine, simply because you can.

Giovanni's dinner menu is an impressive document, beginning with nearly two dozen starters, including salads and both hot and cold antipasti, and moving on to pasta, veal, lamb, beef, fish, and seafood dishes; a separate listing of the day's specials comes tucked inside. Each item's lengthy Italian title, say Filetto di Tonno in Crosta di Peppe Nero con Verdure Piccoline e Patate, is translated into simple English below. (In this case, it's "pepper-crusted ahi tuna with zucchini tempura, crisp potato galette and pan jus.") But the prices, with more than a few entr´es above the $30 mark, need no translation for the deep-pocketed diners who come here.

For their money, Giovanni's guests get sensible portions of neatly garnished food -- a twig of fresh rosemary here, a topknot of frizzled leeks there -- arranged on pretty Villeroy and Boch porcelain at a linen-dressed table set with crystal and fresh flowers. Nothing is coy or fussy; nothing startles or surprises. In fact, if anything, flavors tend toward the understated. The dressing on a Caesar-style salad, for instance, hummed with lemon, oil, and Parmesan, but had scarcely a whisper of anchovy. A thick filet of pearly Chilean sea bass wore a tender, golden breading, but if the menu hadn't identified it as a horseradish crust, we never would have guessed it. And a drizzle of mustard aioli atop our carpaccio tasted neither of mustard nor garlic, but rather was so bland and creamy that we were tempted to call it crème frâiche.

But what the food lacks in sizzle, it makes up for in precision. Vegetables -- slender spears of hybrid asperation, wands of lean asparagus, and baby green beans nearly slim as straws -- tasted like the produce of a summer garden. Fruits -- mammoth blackberries, rosy strawberries, and plump red raspberries -- brought to mind berry-picking expeditions to Portage County. And that plump sea bass? Perfectly done to a shimmering turn and perched beside a portion of celeriac-infused mashed potatoes in a mild scallion au jus, it melted in our mouth like butter.

If the beef carpaccio appetizer proved ho-hum, it was counterbalanced by a velvety "carpaccio" of oak-smoked salmon: translucent, savory wafers, not especially smoky but richly cured, and topped with capers, finely diced red onion, and a few generous squeezes of fresh lemon juice. And among the hot appetizers, we could find nothing to fault in the fat, seared escargot and shrimp, nestled, along with a few wisps of shiitake mushroom, in a delicate puff pastry and surrounded by a moat of garlic-touched veal reduction.

Two thick grilled T-bone lamb chops -- a weeknight special -- were delicious, with just a hint of the slight, sweet gaminess that sets lamb apart from other, less daring meats. The chops had been upended against a dainty pile of Grafton cheddar-scalloped potatoes, topped with juicy golden chanterelles; a selection of perfect veggies (sugar snap peas, asperation, asparagus, and carrot tucked here and there) added a bright note to the classical composition. And although the lavender-rosemary demi-glace tasted not a bit of lavender, it was still a richly fitting final touch.

Despite the menu's emphasis on fish and flesh, pasta, in all its glorious permutations, is not forgotten. There's rabbit-and-sweetbread-stuffed tortellini; linguine with lobster, shrimp, clams, and mussels; penne with pancetta, Parmigiano, and cream; sage-pressed veal ravioli; and ricotta-and-spinach gnocchi with Tuscan meat sauce, just to name a few of the temptations coming out of Executive Chef Jim Markusic's kitchen. A bowl of firm handmade cavatelli, in a deep and savory Bolognese-style veal ragu, was profoundly satisfying. And a large, thin veal rib chop, crusted with herbs, topped with marinara-sauced angel-hair pasta, and completely blanketed in roasted mozzarella, was a study in rustic elegance.

Like the restaurant itself, Giovanni's encyclopedic wine list is a perpetual award winner, with its collection of rare, très cher Italian, French, and West Coast wines. Among its many current highlights is an assortment of California's near- legendary 1997 Cabernet Sauvignons, in a range of prices; many authorities feel that these fine Cabs are at their most drinkable right now, and you'll look long and hard to find a better selection to set about exploring. Among our own favorites was a 1997 Kenwood Cabernet; at $9 a glass, it made a deliciously soft and round accompaniment to lamb, veal, and beef, as well as the heartier pasta dishes.

While the restaurant's dessert list may not break any new ground, selections like crème brûl´e, cheesecake, and flourless chocolate cake are well prepared and artfully presented on curvaceous glass. Tiramisu was exceptionally light-textured, with a precise balance of clean, clear flavors. Bittersweet chocolate truffle cake, with a warm liquid center, was sided by a crunchy tuile basket filled with dolce de leche ice cream, yielding two tempting little sweeties on a single plate. And a luscious berry sorbet, cleverly tucked into another tuile (this time, an upright cylinder anchored to the plate with chocolate) and garnished with berries, crème Anglaise, and chocolate sauce, was almost -- but not quite -- too pretty to eat.

But where Giovanni's continues to tower above most of its competitors is in its service, so sincere and personal that it's easy to forget yours is not the only party in the dining room. The hostess addresses you by your surname; your waiter smiles upon you as you unwind over a premeal cocktail or tarry with an after-dinner port. At least from the front of the house, the kitchen appears to work like a well-oiled machine, with the pause between courses not even a second longer or shorter than it ought to be. And as you leave, a warm handshake from a staffer is a final note of grace. It all harks back to an earlier era, when "hip" was just a body part, and "edgy" only implied the presence of sharp corners. For whatever Giovanni's lacks in of-the-moment cachet, it continues to make up for in solid, consistent, and thoroughly grown-up style.