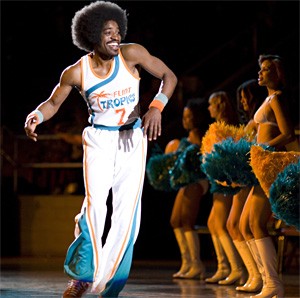 Some folks diversify their stock portfolios when they get older. Some spread out their travel calendars. André Benjamin, one half of the rap duo OutKast, expanded his career.

It's not exactly news when megastars branch out into brand marketing or give different mediums a spin. Hip-hop alone has spawned multitaskers from Russell Simmons to Jay-Z. Even 50 Cent convinced himself he can act. They all have their motivations, and not all of them are financial. But let's be cynical for a moment: A lot of these guys will do anything for a buck. Yet from the start, Benjamin — known to hip-hop fans as André 3000 — put his artistic integrity ahead of any payday.

That's why he took a starring role in Will Ferrell's latest goofball sports comedy, Semi-Pro.

OK. We're being a bit facetious here. But just look at how Benjamin has spent the five years since OutKast's landmark Speakerboxxx/The Love Below was released. In 2005, he appeared with former Funky Buncher Mark Wahlberg in Four Brothers. The following year, he and his OutKast partner Big Boi starred in and recorded the soundtrack to the musical flop Idlewild. Benjamin also created — and lends his voice to — the Emmy-winning Cartoon Network series Class of 3000. And don't forget about his big- and small-screen cameos, his paintings, his clothing line . . .

What do all of these ventures have in common? It might not be obvious at first, but the answer is: None of them had much potential to make Benjamin rich. Well, richer that is. He could be cashing in, selling VitaminWater or something like that. Instead, Benjamin let his instincts carry him. "It's really whatever's going on at the time, whichever way the wind's blowing," he says of his various projects. "I guess what drives it is creativity. It's kind of like whatever I can feel something from, I do it. I just like to make stuff.

So you're not exactly going to get Benjamin to admit that he took the part of Semi-Pro's Clarence "Coffee" Black — the flamboyant star of the American Basketball Association's worst team, the Flint Tropics — just to increase his commercial stats. But the truth is, playing opposite Ferrell and Woody Harrelson in a brainless, part-improvised, commercially viable comedy actually ended up challenging the musician-turned-actor in unexpected ways — even if he insists he didn't sweat it.

"I really wasn't too intimidated," he says. "For the audition, I had to audition with Will, and that actually wasn't too bad. In music, you freestyle a lot, and you just kind of throw ideas out there. When you read a script, to make your character as real as possible, you have to sometimes go off on tangents too and keep going as long as possible. You've got film, so why not? Keep recording it."

One of the biggest obstacles, says Benjamin, is the short shorts that he and Ferrell sport onscreen. They're as small and as tight as anything Fergie shakes her ass in. Ferrell has noted that he had to wear an extra pair of underpants while filming to keep his junk from falling out whenever he dropped into a defensive position. "We had to do two weeks of basketball training, so I just got that over with there," laughs Benjamin. "I wore my shorts through the two weeks of practice, so I wouldn't feel self-conscious on the first day of shooting. Clarence didn't care about the short shorts, so why should I?"

Given all this testicle-containment and artistic diversification, you have to wonder if like, say, Rob Zombie, Benjamin allows the various mediums he dwells in to inform each other. For example, Zombie makes music based on movies he likes. Then he makes videos that are inspired by both films and his music. Plus, he writes and directs movies that crib inspiration from all of them.

"They all relate in some way, because they're all ideas," says Benjamin. "But I wouldn't say one helps me out in another field. With music, it's kind of like I'm the writer, director, actor — everything. I have control of the outcome. In film, I don't have that control of what it becomes. You're pretty much under somebody else's control."

That appeals to him, he says. In fact, it's the very reason he likes making movies so much. "For 14 years, I've kind of been the puppet-master," he says. "It's kind of cool, especially when you're going through a period trying to find inspiration in the music. But when a great script comes along with a character I think I can play, it's great."