Dido's mega-platinum debut gives way to a Life for Rent. 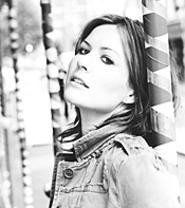 Dido owes her success to Eminem. And the British pop star knows this. And more than three years after the erstwhile Marshall Mathers incorporated six lines of her moody rumination on loneliness, "Thank You," into his raging tale of an obsessed fan, she's still in debt. "It was a bolt from the blue," she says. "It wasn't an amazing time in music. Suddenly, that came on the radio, and I thought, My God."

It's a mismatched duo, certainly. But the singer-songwriter says the timing couldn't have been better. When she released her debut album, No Angel, in 1999, it went nowhere. A few months passed; then the Detroit rapper wove the song's opening lines into his hip-hop saga "Stan." "Thank You" became a radio hit, and No Angel sold 12 million copies, becoming the best-selling debut album by a female artist in British history.

Last year, Dido holed up in the studio of her house in rural England "in the middle of nowhere," where she laid down tracks to her second album, Life for Rent. "[The record company was] like 'Okay, what did she do last time? She got left completely alone, and no one cared. So that's what we're going to do this time -- just leave her be,'" Dido says.

She did have help from her older brother, producer Rollo, whose group Faithless served as Dido's early stomping ground. (The band had a club hit, "God Is a DJ," five years ago.) The pair crafted 11 songs, based on notebooks of Rollo's ramblings and BS sessions in the studio. "They were about what we did last night, talking about what our mates were up to last week," Dido says. "Gossip, gossip, blah, blah, song." Life for Rent's dreamy first single, "White Flag," comes straight from one of Rollo's notebooks. "It's about loving someone and never telling them, because it'll ruin their life," she explains.

Despite her Top 40 ubiquity, Dido remains a humble woman, still amazed by her own good fortune. "If this had all happened when I was 18, 19, when I was a proper, angst-ridden teenager, I'd be a mess right now," says Dido, whose childhood nickname comes from the Greek myth about the queen of Carthage. At 31 (she turns 32 on Christmas Day), Dido's obsessed with musical perfection, and she relies on her "insane dreams" to match mystical melodies and lyrics to her sultry voice. She also depends on her idols -- including rapper 50 Cent ("I listen to him every morning"), Coldplay, and James Taylor -- for inspiration.

"I do worry about that slightly instant thing of, if your first, second, third single doesn't go, do you get dropped [from your label]?" she says. "I'm just sure there are some amazing people out there we're not hearing as much as we should."